Americans have had enough of the progressive left’s relentless attempts to neuter the Second Amendment, and there has been no greater grassroots response to unconstitutional maneuvers than in Virginia.

Virginia Democratic Gov. Ralph Northam’s vow to push gun control laws through the General Assembly, where his party now holds the majority in both the state Senate and House of Delegates, sparked a swift and resounding backlash from Old Dominion citizens.

Democrats wasted no time introducing bills in November when the legislative window opened for next year’s General Assembly session.  The Assembly is expected to vote in January on SB 18 and SB 16, bills that would ban “assault firearms,” raise the minimum age for gun purchases to 21 and require background checks for any firearm transfer.

Fed up with the gun-grabbers on the left and in anticipation of the new gun laws, dozens of local Virginia counties and towns have passed resolutions to declare their localities Second Amendment sanctuary cities.

The Virginia Citizens Defense League, a gun-rights group that provides a model resolution for localities, says 85 of Virginia’s 95 counties have approved so-called sanctuary measures. At least 10 cities and 17 towns have done the same, according to the VCDL. 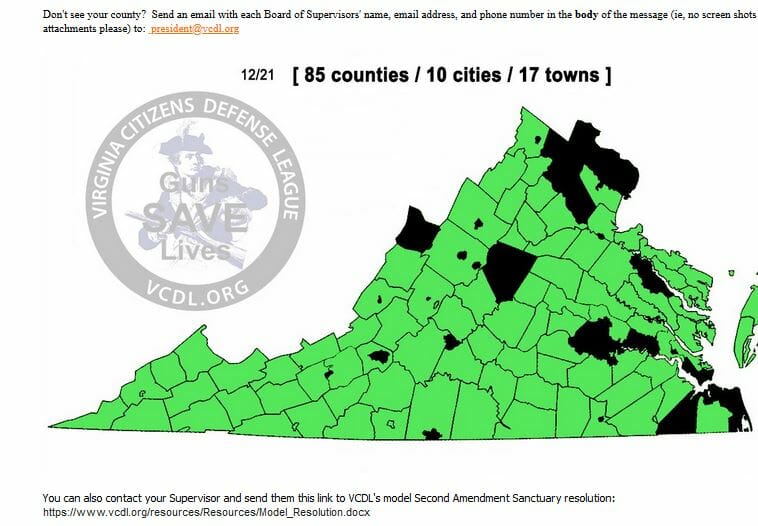 According to VCDL’s website, 85 counties, 10 cities and 17 towns have adopted sanctuary city laws.

The impetus for the movement has been wholly grassroots, and it’s picking up steam.

“Localities have passed this that weren’t even on our radar,” VCDL President Philip Van Cleave told The Washington Free Beacon. “It’s like a grass fire that the grassroots had started and then we went in and threw some more gasoline and a match on it to make it burn even brighter.”

The VCDL is taking the lead in organizing a rally on the steps of the Capitol in Richmond on Jan. 20, 2020.

One sheriff made headlines after he vowed to deputize citizens should the bills pass. Sheriff Scott Jenkins of Culpeper County in north-central Virginia said in a Dec. 4 Facebook post that if the General Assembly passes the proposed bills, “I plan to properly screen and deputize thousands of our law-abiding citizens to protect their constitutional right to own firearms.”

Aware of the support Jenkins received when he vowed to protect the Second Amendment, one Democratic legislator suggested the National Guard could be used to confiscate guns if law enforcement officers refuse to cooperate.

Other counties have responded to the threats against the Second Amendment by forming militias. After Law Enforcement Today reported on such an effort in Tazewell County, it said it was subsequently flooded with thousands of emails from people across the state — police officers, veterans and other patriotic Americans — who said they were joining.

In an attempt to dampen the Second Amendment support efforts, Virginia Attorney General Mark Herring, a Democrat, issued an advisory opinion, saying: “It is my opinion that these resolutions have no legal effect. It is my further opinion that localities and local constitutional officers cannot nullify state laws and must comply with gun violence prevention measures that the General Assembly may enact.”

Democratic lawmakers are also fighting back against the militia movement. They introduced SB 64, a bill that would establish that a person is “guilty of unlawful paramilitary activity, punishable as a Class 5 felony,” if he assembles “with one or more persons with the intent of intimidating any person or group of persons by drilling, parading, or marching with any firearm, any explosive or incendiary device, or any components or combination thereof.”

The battle lines have been drawn, but one thing is certain: Americans are energized and ready to fight any attempt to nullify the Second Amendment.