SAN DIEGO (AP) — Former NFL player Kellen Winslow Jr. — the son of a Hall of Famer who himself earned more than $40 million during his career — has been convicted of raping a 58-year-old homeless woman last year in his picturesque beach community of Encinitas, north of San Diego.

A jury returned the verdict Monday in San Diego Superior Court in Vista but was expected to continue to deliberating on two more counts of rape involving a 54-year-old hitchhiker and an unconscious teenage girl in 2003.

The jury also found the 35-year-old former tight end guilty of indecent exposure and lewd conduct involving two other women, but jurors found him not guilty of one count of a lewd act.

Winslow, who played for Cleveland, Tampa Bay, New England and the New York Jets, faces up to life in prison if convicted of all counts.

All five women testified during the nine-day trial. Winslow did not take the stand.

Defense attorneys pointed out inconsistencies in the accusers’ testimonies and argued the women invented the allegations to prey on the wealth of Winslow.

Prosecutors say the son of Hall of Famer Kellen Winslow felt empowered by his fame to abuse the most vulnerable.

Prosecutor Dan Owens told the jury of eight men and four women that Winslow is a “wolf in sheep’s clothing.”

The homeless woman in Encinitas, who was 58 at the time, testified that he befriended her and attacked her next to his vehicle after inviting her for a coffee in May 2018.

A 54-year-old hitchhiker said he drove her to an Encinitas shopping center parking lot and raped her in his Hummer in March 2018.

A 57-year-old woman said he exposed himself to her while she tended to her garden in May of 2018. The jury found him guilty of that charge Monday.

After news of the attacks broke, a woman came forward and said Winslow had raped her when she was a 17-year-old high school student in 2003. He was 19 at the time and had come home from college for the summer. She said she passed out at a party in a San Diego suburb and woke up to find Winslow assaulting her.

A 77-year-old woman who went to the same gym as Winslow in the beach community of Carlsbad said he committed lewd acts in front of her, including touching himself, while Winslow was free on $2 million bail in February. The jury found him guilty on the charge of touching himself in front of the woman at the gym, but not guilty of committing a lewd act while in the facility’s hot tub in front of the same woman who said it happened on a different occasion.

After the jury sent a note saying it was deadlocked on the eight other charges, the judge sent them back to deliberate. Jurors went home less than an hour later and were ordered to resume deliberating Tuesday.

The panel on Friday sent a note to the judge indicating it was possibly struggling to find agreement.

“The jurors could benefit from an explanation as to what being under oath means,” the note said. “Additionally, how we should follow the law and not what we think the law means.”

The judge told jurors being under oath means telling the whole truth and that they should follow the law how it is written.

Defense attorney Marc Carlos questioned the credibility of the women’s claims, saying they had lied, misconstrued things or were unable to initially identify him correctly.

Defense lawyers also said the sex was consensual and that Winslow had cheated on his wife repeatedly with no-strings-attached sex.

Prosecutors said the crux of the women’s stories didn’t change and that evidence included traces of Winslow’s DNA on one of the accuser’s pants and GPS locations placing him where the women said the assaults occurred.

The five women testified that they didn’t know Winslow was famous when they met him.

'Yesterday was a great day for Michigan, and yesterday was anything but partisan politics,' US Rep. Lisa McClain said after the vote.
Kipp Jones July 24, 2021

'It is clear that the pandemic has inhibited relationships and potential opportunities to procreate for liberals.'
Miska Salemann July 24, 2021

Radical vegans in Sweden are getting bolder, and now farmers are hiring private security forces to stop them.
Garion Frankel July 24, 2021

St. Louis Prosecutor Who Pursued McCloskeys but Refused to Show for Murder Hearing Gets Savaged by Judge: 'Abandoned' Duty to Both City and the Law

'The proposal is not only symbolic in nature but can also serve as insurance for the future,' Sen. Martin Červíček said.
Erin Coates July 24, 2021

'We will not tolerate any discrimination, as it goes against the core values and principles of our sport.'
Andrew Jose July 24, 2021

Texas is ready to spring into action once the Supreme Court overturns the ruling that legalized abortion in America.
Jack Davis July 24, 2021

Yoel is at first excited, and then saddened to take in the shelves of food knowing that his compatriates at home are starving.
Isa Cox July 24, 2021

AZ Audit Exclusive: Election Systems Password Hasn't Been Changed in 2 Years and Is Shared All the Time

The audit has uncovered a number of troubling election security issues - including an elections system that was far too easy to log into.
C. Douglas Golden July 24, 2021 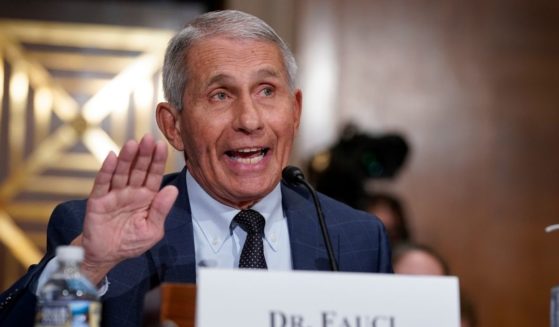 'I keep an open mind and say that we should consider all possibilities until we definitively prove one,' Fauci said.
Jack Davis July 24, 2021