SAN FRANCISCO (AP) — The Latest on the Democratic presidential candidates (all times local):

Castro is the only Latino in the broad 2020 Democratic presidential field. In response to a question at an activist forum in San Francisco, Castro said Trump has exhibited “racism” toward Latinos. And, he says, “that’s one of the reasons I’ve determined in this campaign that we’re just going to be fearless.”

Castro says that when he’s in the first presidential debate in June, he hopes that Latino boys and Latina girls can watch and say that what the president has said isn’t true, “that we can do anything.”

“I don’t hear many people saying I want to keep my insurance company,” Harris told a forum for 2020 Democratic hopefuls hosted by the liberal activist group MoveOn. Instead, she said, people don’t want to lose their trusted doctor.

“The response that we offer is you should know that 91% of all doctors in our country are in Medicare right now, so the odds are very low you will have to give up that doctor you know,” Harris said.

Harris has backed several different versions of Medicare for All. This winter she had to backtrack on a contention that one version she supports would eliminate private health insurance.

New Jersey Sen. Cory Booker is getting California Democrats on their feet with a rousing call for gun control and a declaration that the party must do more than simply beat Donald Trump.

Booker is the last of 11 speakers at a gathering of Democratic activists in the liberal bastion.

Booker is the only candidate who referenced the fatal shooting of 12 people Friday in Virginia Beach, Virginia. He says America must not “normalize the carnage of gun violence.

He’s also declaring that defeating Trump is “a floor, not a ceiling” and that “we have greater ambitions than that.”

Those attending the California Democratic Party’s weekend convention in San Francisco booed Hickenlooper as he declared “socialism is not the answer” to achieving progressive policy goals. He’s the first Democratic presidential candidate to be booed during a daylong slate of candidate speeches.

Hickenlooper says he’s been successful in Colorado by taking a “pragmatic approach” and not demonizing the private sector.

His remarks earned him a swipe from another White House hopeful, Gov. Jay Inslee of Washington. Inslee told the crowd he’s the governor “who thinks we shouldn’t be ashamed of our progressive values.”

Hickenlooper later tweeted that he knows his message won’t be popular with all Democrats.

Democratic presidential candidate Pete Buttigieg says the riskiest thing Democrats can do is “play it safe” if the party wants to beat President Donald Trump.

The Democratic mayor of South Bend, Indiana, spoke to thousands of Democratic activists Saturday in California, which holds its 2020 primary contest on Super Tuesday.

Buttigieg did not directly mention former Vice President Joe Biden in his remarks. But some Democratic voters have argued that Biden is the party’s safest option to beat Trump.

Biden is notably absent from the weekend gathering that features 14 Democratic contenders, instead addressing an LGBTQ civil rights gala event in Ohio.

Sen. Bernie Sanders is best known for railing against billionaires. But at an event run by a Democratic activist group he said he wanted to focus today on ending wars.

The Big Ideas forum is run by the liberal group MoveOn and eight Democratic presidential hopefuls came Saturday to describe one big idea. Sanders made his “the need to stop endless wars and to bring the world together.”

Sen. Elizabeth Warren has taken a thinly veiled shot at one of her rivals for the Democratic presidential nomination.

Warren didn’t name former Vice President Joe Biden in her speech at the California Democratic convention in San Francisco. But it was clear she was targeting the Democratic frontrunner, who’s expressed hope the Republicans will have “an epiphany” after President Donald Trump is gone and will work with Democrats.

Warren told the cheering crowd that “Some say if we all just calm down, the Republicans will come to their senses. But our country is in a crisis. The time for small ideas is over.”

California Sen. Kamala Harris has kicked off a 14-candidate marathon of 2020 Democratic hopefuls in San Francisco by calling for President Donald Trump’s impeachment.

Harris is a former San Francisco district attorney who got the prime first speaking slot as California Democrats meet for their annual convention on Saturday.

Her campaign tried to demonstrate its support in the nation’s biggest state by handing out multilingual placards to the crowd and emblazoning official convention lanyards with her name.

Harris in her seven-minute speech spoke about the need to fight back against Trump. She ended by saying: “We need to begin impeachment proceedings and we need a new commander in chief!”

More than a dozen Democratic presidential hopefuls have flocked to California for the chance to make their cases to thousands of activists in the nation’s largest liberal stronghold.

Candidates held rallies across the state before descending on San Francisco for a three-day gathering of the California Democratic Party.

Home-state Sen. Kamala Harris is looking to make a show of force while Sen. Bernie Sanders hopes to build on the fervent support he received in California during his 2016 White House run.

Twelve others in the 2020 pack want to introduce themselves and spark interest among the party’s most faithful voters.

Among the major contenders seeking to challenge President Donald Trump, only former Vice President Joe Biden declined to attend the California convention. He was scheduled to speak at a Human Rights Campaign event in Ohio on Saturday night. 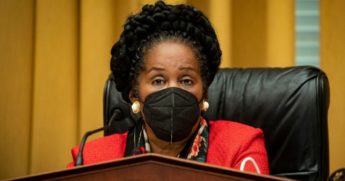