Mott had thought the man who broke Babe Ruth’s record was from his home state, South Dakota. Actually it was North Dakota, although the Hall of Fame trainer wasn’t about to totally lose the debate. He insisted Maris bought his beer in South Dakota.

After some laughs, the talk shifted to Saturday’s Belmont Stakes, the final leg of what has been a chaotic Triple Crown, not only for thoroughbred racing but for the 65-year-old Mott.

What will be remembered is that Maximum Security finished first in the Kentucky Derby and was disqualified for interfering with eventual Preakness winner War of Will. That elevated Country House to first place and gave Mott his first Kentucky Derby win.

It also put Mott in a category with Maris — an asterisk next to their names.

Mott will be remembered as the first trainer to win the Kentucky Derby after the first horse across the finish line was disqualified.

A wry smile crosses Mott’s face when he is reminded of the link to Maris.

He acknowledged that being in the Derby winner’s circle Derby was awkward. He felt a few of the people shaking his hand were trying to get away as quickly as possible. It was almost like apologizing for winning, or being named the winner.

“I certainly don’t want the owners or anybody else to think I’m not pleased about winning,” Mott said, adding Country House ran his heart out in the Kentucky Derby.

Mark Casse, who trains War of Will and also will be looking for his second win in this Triple Crown, said he felt bad for Mott the day after the Derby.

What would make his Triple Crown season perfect is having the 1½-mile race go off without a hitch.

The disqualification marred the Kentucky Derby. The Preakness was highlighted by War of Will’s performance and another horse running around the Maryland track after unseating his rider.

Ten colts have been entered for the Belmont, but it seems to be a two-horse race.

Tacitus, who will be racing for the first time since being placed third in the Derby, is the 9-5 favorite. War of Will is the 2-1 second choice.

The other eight horses are rated at 8-1 or higher.

Trainer Mark Hennig, who handles 12-1 Bourbon War, said Tacitus and War of Will are the most accomplished colts in the field.

“I don’t think any of them has been dominant, like some of those horses who come here to the Belmont odds-wise,” Henning said, referring to recent Triple Crown winners Justify (2018) and American Pharoah (2015).

Joevia drew the No. 1 post position. Jose Lezcano is the jockey on the 30-1 choice.

The rest of the field in post-position order with horse, jockey and odds:

NOTES: Mott said Country House is at Churchill Downs and has been galloping. He hopes to have him ready to run at Saratoga this summer.

News Host: 'Joe Biden Is Struggling with Dementia' and the Mainstream Media Is Complicit in Hiding It

Dems Get Sneaky with COVID Bill, Include $100M for Subway System in Silicon Valley 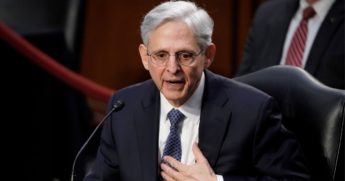