Ukraine Crisis: The Diplomat America Needs the Most Is Nowhere in Sight Thanks to Joe Biden 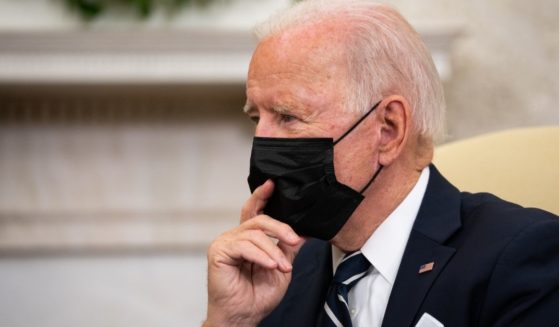 Three Members of US Team Negotiating with Iran Quit Over Biden's Approach: Report

President Joe Biden, who relied upon Planned Parenthood’s campaign cash a year ago, is now doing everything in his power to turn the abortion spigot back on in Texas.

“The Justice Department intends to ask the Supreme Court to vacate the 5th Circuit’s stay of the preliminary injunction against Texas Senate Bill 8,” DOJ spokesperson Anthony Coley said in a statement, according to Politico.

SB 8 is the legal shorthand for the Texas “heartbeat” law that makes it illegal to perform an abortion after a baby’s heartbeat begins, which is usually around the sixth week of pregnancy.

Although heartbeat laws in other states have been swatted aside by the courts, Texas used an unprecedented enforcement mechanism. Individuals can file suit against anyone who has broken the law, and collect $10,000 if they win.

The Supreme Court has reviewed the law before and rejected efforts to prevent it from taking effect on Sept 1. At that time, the court said its decision was based upon procedural grounds and was not a full-fledged decision on the constitutionality of the Texas law.

The extent to which the court was split was revealed in the dissents filed. Chief Justice John Roberts and Justices Stephen Breyer, Sonia Sotomayor, and Elena Kagan all opposed the ruling.

Justices Clarence Thomas and Samuel Alito were joined by three appointees of former President Donald Trump — Neil Gorsuch, Brett Kavanaugh and Amy Coney Barrett — in tossing aside the request to block the law.

Since the law took effect, The Washington Post noted, it has “ effectively halted almost all abortions in Texas” and the Biden administration has pulled out all the stops to block it.

For a few hours last week, it seemed the Justice Department had prevailed when District Judge Robert Pitman granted an injunction to block the law while court arguments over it continued.

The 5th U.S. Circuit Court of Appeals issued a temporary stay last week, which was followed Thursday by a ruling from the court that allowed the law to remain in effect.

That ruling triggered the Justice Department’s decision to appeal to the Supreme Court, much to the applause of Planned Parenthood.

“We appreciate the Department of Justice moving quickly to ask the Supreme Court to intervene, and Planned Parenthood is hopeful that the Court will use this new opportunity to stop this law, which has taken too much from Texans already,” said Helene Krasnoff, Planned Parenthood’s vice president for public policy law and litigation, according to NBC.

In a statement issued Friday, Texas Right to Life spokeswoman Kimberlyn Schwartz noted that the fight was not over.

“We are excited to continue saving hundreds of lives through the Texas Heartbeat Act. However, the battle is not finished. We expect the Biden administration to appeal to the Supreme Court of the U.S., and we are confident Texas will ultimately defeat these attacks on our life-saving efforts,” she said in a statement on the organization’s website.

In an earlier statement, Schwartz said the law was saving lives.

“The Texas Heartbeat Act saves approximately 100 lives from abortion per day, and we’re grateful that this tremendous impact will continue,” she said.

Three Members of US Team Negotiating with Iran Quit Over Biden's Approach: Report

Even three of the Biden administration's own negotiators reportedly are fed up with the soft approach to Iran.
By Jack Davis  January 26, 2022

'The Attorney General wants the university counsel to return to giving legal advice based on law, and not the philosophy of a university.'
By C. Douglas Golden  January 26, 2022

Speaker of the House Nancy Pelosi announced on Tuesday that she would be seeking re-election in the 2022 mid-terms.
By Jack Davis  January 26, 2022

A fighter jet crashed on a U.S. aircraft carrier in the South China Sea; some reports say the U.S. will have to race China to recover it.
By Jack Davis  January 26, 2022

Biden's shopping trip apparently was supposed to make him an approachable man of the people. Too bad our adversaries are also watching.
By Christine Favocci  January 26, 2022

Ukraine Crisis: The Diplomat America Needs the Most Is Nowhere in Sight Thanks to Joe Biden

With Russia seemingly on the verge of invading Ukraine, Biden has still not appointed an ambassador to the threatened nation.
By Abby Liebing  January 25, 2022

Three of Biden's negotiators have walked away from talks with Iran, making the Biden administration look weak and out of control.
By Abby Liebing  January 25, 2022

Tucker: Elites Believe a Deadly Lie About the Ukraine Crisis - And It Could Get Us All Killed

Carlson tells why we're moving to war with Russia -- the psychology of our leaders, plus lobbyists for Ukraine and for defense contractors.
By Mike Landry  January 25, 2022

The Virginia governor's real battle only started with his upset victory in November - now the heavy work begins.
By Joe Saunders  January 25, 2022
Next