It’ll do as a Band-Aid, she supposes, but what she really wants is the president “imprisoned & placed in solitary confinement.” And why stop there?

After he’s released from the hole, put him in the stocks, slather some clown makeup on him and let crowds pelt him with rotten vegetables. After that, I think tarring and feathering is probably against the Eighth Amendment, but if the Democrats can pack the Supreme Court that should be no big deal. Yes, we can!

Not that the reliably outré California Democrat really believes in anything that barbaric, mind you. But then, she doesn’t really believe in solitary confinement, either.

Not that you would know it from her Tuesday tweet, in which she demanded that the president be put in isolation because of comments he made that described whoever gave information to the White House “whistleblower” as “close to a spy.”

“I’m calling on the GOP to stop Trump’s filthy talk of whistleblowers being spies & using mob language implying they should be killed,” Waters said.

I’m calling on the GOP to stop Trump’s filthy talk of whistleblowers being spies & using mob language implying they should be killed. Impeachment is not good enough for Trump. He needs to be imprisoned & placed in solitary confinement. But for now, impeachment is the imperative.

“Impeachment is not good enough for Trump. He needs to be imprisoned & placed in solitary confinement. But for now, impeachment is the imperative.”

Well, it’s good to know she’ll settle for something.

The tweet refers to remarks Trump made at a meeting with the United States Mission to the United Nations.

“I want to know who’s the person who gave the whistleblower the information, because that’s close to a spy,” Trump said. “You know what we used to do in the old days when we were smart with spies and treason, right? We used to handle it a little differently than we do now.”

The remark may not have been in the best taste but was clearly meant in jest. The same can’t be said for Republican challenger William Weld’s call for Trump to be executed for treason. Nor can it be said for plenty of other people who have brought up the t-word since this whole wild Ukraine ride began. But I digress, as always.

RELATED: Maxine Waters Says She Wants To Use Trump To 'Send a Message Across the World'

Waters quickly backtracked on the seriousness of the tweet, and for good reason: She’s supported legislation which sought to “develop and implement national standards for the use of solitary confinement to ensure that it is used infrequently and only under extreme circumstances.”

According to The Washington Free Beacon, that’s the language of the 2018 Jobs and Justice Act, of which Waters was an original co-sponsor. That bill didn’t go anywhere, so I suppose she no longer feels herself tied to its tenets, but its good to know the hypocrisy still lives loudly within Maxine.

She’s also a supporter of another bill that would severely curtail solitary confinement, the Solitary Confinement Reform Act, as evinced by this message to Paul Manafort while he was in the hole (tasteful!):

Manafort, now that you know, will you join with organizations attempting to create fairness in the criminal justice system by supporting the Solitary Confinement Reform Act (S.2724)?

So, did she mean what she said about President Trump?

“No, not really,” she told MSNBC several hours later.

“I did express myself in ways to show how terrible I think he is and how he really should be punished,” Waters said. “But of course, impeachment is what we’re focused on right now.”

Oh, so it was hyperbole … just like what Donald Trump said. But I thought we weren’t supposed to engage in this sort of thing. After all, that was the impetus behind Waters’ call to put him in prison, right?

But then,  this isn’t the first time that Waters has set standards for the other side she flagrantly ignores in her own rhetoric. While she wants the president behind bars, she condemned the “lock her up” chant at Trump rallies during the 2016 election, arguing that it was “developed strategically with people from the Kremlin, with Putin.”

There’s no evidence for that, mind you. If I were to say that Waters’ “lock him up” tweet was developed strategically with the errant spirits of Fidel Castro and Howard Zinn, the only reason her accounting of the origins of “lock her up” is more credible is that I would have to prove ghosts exist.

If we want to delve a bit further down the rabbit hole of hypocrisy that is the rhetoric of Maxine Waters, consider her statement this week that Trump’s rhetoric is “setting some of us up to be killed.”

“There are a number of people who have been convicted for threatening to kill me, and when he does that he’s dog-whistling to the white supremacists, the KKK, and the dangerous people,” she said.

“We have stories about many of those white supremacists who do nothing but practice how they’re going to be involved in a civil war and fight against this government. This president is irresponsible in so many ways aside from making us a target of these white supremacists.”

Maxine Waters, who infamously instructed her supporters to harass Trump officials in public and “tell them they’re not welcome anymore, anywhere…”

…is now complaining on MSNBC that she can’t go to the grocery store without security. pic.twitter.com/HmX6NQ2VCR

Waters, you may recall, is the congresswoman who literally called for the harassment — and, by tacit extension, the potential physical attack — of those in Trump’s orbit.

In 2018, after then-White House press secretary Sarah Huckabee Sanders was driven from a Virginia restaurant, Waters said that, “if you see anybody from that cabinet in a restaurant, in a department store, at a gasoline station, you get out and you create a crowd, and you push back on them, and you tell them they’re not welcome anymore, anywhere.”

This isn’t even hyperbole. This is basically a direct exhortation to physically confront Trump administration members. However, Trump makes a joke and all of a sudden he’s putting people in danger.

If it weren’t for double standards… 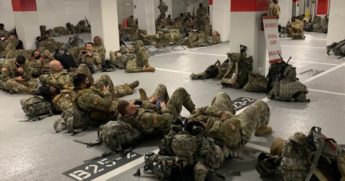