As the NBA season winds down this coming week, it will do so on a sour note, as this will be one of the last seasons where basketball fans were able to enjoy the commentary of former NBA legend Charles Barkley.

As the league has slowly crept toward becoming a left-wing political organization, Barkley has remained unaffected by virtue signaling and the anti-cop, anti-American rhetoric accepted by his peers and those still playing the game.

Barkley announced weeks ago he will soon leave his post on “Inside the NBA” on TNT — a job he’s held for the last two decades.

Barkley, a lovable giant both on and off the court, is blaming cancel culture and corporate spinelessness on his way out the door.

“I’ve already told them that. I’m not working until the day I die. That’s just stupid. And if I don’t have enough money by now, I’m an idiot anyway. So, they should fire me anyway,” Barkley bluntly said.

The former Phoenix Suns and Philadelphia 76ers great had more harsh words for his bosses at TNT during the interview.

Barkley, who has had it out in good humor with fans in San Antonio during his illustrious career, lamented the fact that he’s no longer allowed to make jokes about certain members of the San Antonio Spurs fanbase.

“If you crack a joke the wrong way, they’re like, ‘Oh, no, no, no, no, you crossed the line,'” Barkley told the station. “I mean, they won’t even let me talk about San Antonio anymore. You know, when I’m always talking about their big ol’ women down in San Antonio,” he said.

“They’re like, ‘Charles, we got one lady [who] wrote an article.’ I’m like, ‘First of all, I didn’t call anybody personally fat in San Antonio. I was just joking around,’” he said about his formerly fun feud with the fans in that city.

Barkley concluded of the TNT brass: “A lot of our bosses are cowards.”

Barkley has had fun at the expense of unspecified “big ol’ women” in Texas for years. Although being told not to make jokes about someone’s weight might seem trivial, the censorship is oppressive, and will drive him into retirement. That apparently can’t come soon enough.

He said his network bosses constantly policing his language has driven him to the point where the job just isn’t worth it at this point.

Related:
Charles Barkley Comes Under Attack for Giving the Real Facts of the Breonna Taylor Case

Barkley credited cancel culture and the TV “jack***es” who allow online pressure to control what he’s allowed to say on TV.

“It’s gotten so out of hand right now, I couldn’t imagine having to watch myself. You can’t even have fun nowadays without these jack***es trying to get you canceled and things like that,” Barkley said. “All of a sudden in the last year and a half, everybody’s trying to get everybody fired and it really sucks.”

With “wokeness” having taken over all of culture and sports, Barkley and his TNT colleague Shaquille O’Neal have kept things balanced for fans who refuse to buy into the insanity, the censorship, the divisiveness and the political correctness.

The sports world will soon be worse off as Barkley cashes his checks into early retirement.

But those who still intend to watch “Inside the NBA” will have the opportunity to enjoy the hot takes of one of the most imposing players in league history and one of the most sincere broadcasters of the last 20 years — at least for a little while longer.

Barkley is a national treasure in a country where mortal fortitude, fun and humor are suddenly hard to come by. Thanks to cancel culture, he will soon be off the air, but at least for now, that will be voluntary.

Kudos to the former basketball great. He doesn’t appear willing to give TNT a chance to cancel him, and he won’t cave to PC culture, either. He’s going to preemptively cancel the corrupt network and his relationship with it.

One thing is for certain: If this coming season is Barkley’s last behind the TNT desk, it’s sure to be an entertaining one.

Kipp Jones
Johnathan "Kipp" Jones has worked as a reporter, an editor and a producer in radio, television and digital media. He is a proud husband and father.
Johnathan "Kipp" Jones has worked as an editor and producer in radio and television. He is a proud husband and father.
Sodom & Gomorrah: People Having Sex in San Fran Street Go Viral, But the Comments May Be Worse
The Walls Are Closing In: Nancy Pelosi Becomes Latest High-Profile Dem to Turn On Cuomo
Ex-Biden COVID Adviser Says Cloth Masks Don't Work Despite Orders from CDC to Wear Them
CNN Under Fire After Email Shows Anchor Chris Cuomo Drafted Statement for Brother Andrew Cuomo
US Olympian Who Turned Back on Flag Comes Up Way Short of Winning a Medal
See more...
Advertisement

New York Gov. Andrew Cuomo is accused of sexually harassing multiple women, and his brother is using his influence to cover for him.
Rachel Bratton August 4, 2021

'We can either have a free society or we can have a biomedical security state,' Florida Gov. Ron DeSantis said.
Erin Coates August 4, 2021

After a short time, the family realized one of their members was not with them, and was likely still trapped inside on the second floor.
Amanda Thomason August 4, 2021

A man shared online that he witnessed two people having sex on a San Francisco sidewalk - and he was the one who came under fire.
Kipp Jones August 4, 2021

The suspects face 48 felony charges and two misdemeanors in total, and nine of them have criminal histories.
Erin Coates August 4, 2021

Watch: AOC Busted for Donning Mask for Photo Op, Removing It Immediately After

The leftist congresswoman was caught not wearing a mask before or after a photo opportunity, and accusations of hypocrisy are running rampant.
Cameron Arcand August 4, 2021

'When people know that President Trump has endorsed me, they’re going to vote for me,' the candidate told Bloomberg before the election.
Jack Davis August 4, 2021

The Walls Are Closing In: Nancy Pelosi Becomes Latest High-Profile Dem to Turn On Cuomo

Nancy Pelosi joined the chorus calling for Andrew Cuomo to step down following an investigation into sexual assault allegations against him.
Kipp Jones August 4, 2021 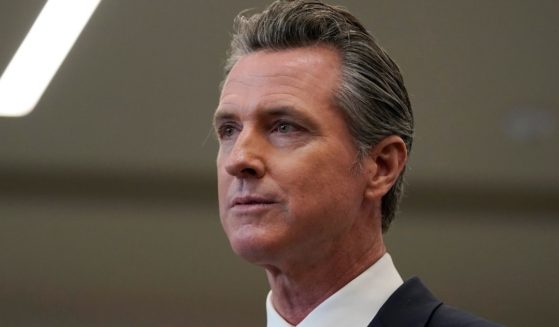 The poll also found a surprising candidate leading the race to replace Democrat Gavin Newsom if he is recalled.
Erin Coates August 4, 2021

The reporter was casting for quotes to bolster the narrative about transgender weightlifter Laurel Hubbard, but 3 medalists refused to bite.
Jack Davis August 4, 2021