The $7 million in secret dark money that flooded in from the “Majority Fund” to defeat Arizona Republican Senate candidate Martha McSally was only a preview of the $1 billion in dark money expected to be spent in the 2020 elections.

Any conservative who opposed all rules regarding money in politics should rethink their position.

The Citizens United decision in 2010 gave Republicans an edge in the next few elections — but now the Democrats are dominating in secret money with Democratic Leader Chuck Schumer’s Majority Fund part of $81 million in secret money spent by liberal groups on the 2018 midterms to only $47 million by conservative groups (See our link here to reports by Issue One, Open Secret and Fox News). 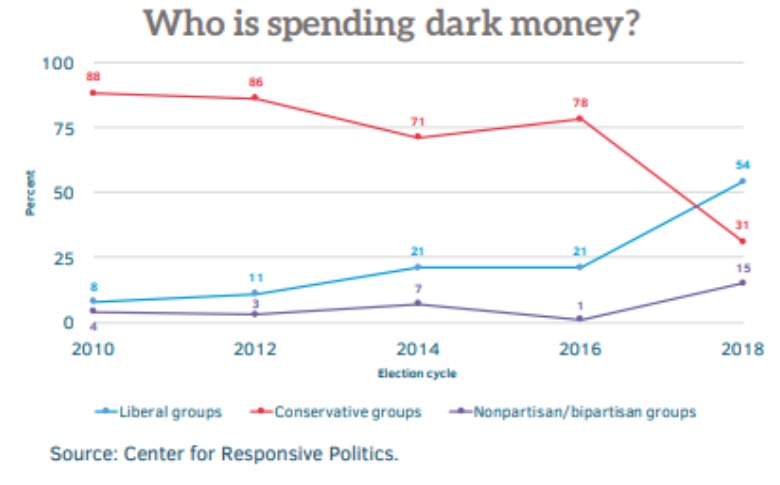 When conservative talk show host and Fox News contributor David West and I took our case for conservative reform to this meeting of New York City lawyers, support was building to stop another kind of illicit campaign money via HR4177. This bill would have stopped the illicit practice of processing unverified credit card contributions first identified via the research of our Advisory Board Member Peter Schweizer.

Schweizer saw two big threats to our Democratically elected republic: voter fraud and unverified credit card contributions. For whatever reason many conservatives latched onto ONLY the former, which is not in our purview at Take Back Our Republic, but ignored the latter.

The unverified credit card process was started when the Obama 2008 campaign opted out of allowing their bank processors to verify that credit card contributions actually came from an American citizen. Other campaigns copied, and as a result a programmer anywhere in the world can build a simple program to move millions of dollars each day from a foreign interest into any political group they want using fake names of Americans for massive number of $100 contributions in the name of millions of Americans who do not know their names are being used to move illicit money.

While 52 Republican Members of Congress and 31 Democrats sponsored the bill to stop this process, based on our educational paper, the effort lost steam over the concern of some Republicans that ANY rules about money in politics were unacceptable.

Despite Republican control of the House and Senate, the bill was not passed, and as a result, Act Blue used the process to place $1.5 billion in unverified credit card contributions to take over the House in 2018.

Conservatives need to stop following those Republicans and political consultants who are leading them off a cliff in 2020 by refusing to back any anti-corruption rules if they put any limits on the flow of illicit money into campaigns in the name of a distorted view of the First Amendment.

Right now Members of Congress can only ask for $2700 at a time and their donors are disclosed while dark money groups process millions from one person or group without anyone ever knowing. Let’s start a conversation such as applying the same rules – perhaps both Members and the now secret dark money groups can all ask for $20,000 at a time but it all must be disclosed.

To those who argue that the money will always find a way into campaigns, remember The Wall Street Journal pointed out that when China flooded money into Bill Clinton’s campaign our laws allowed Congressman Tom Davis and others to catch them.

With those laws gone, we need to act this year or China and others such as Iran could easily dump a billion into U.S. campaigns with no one knowing it.

John Pudner is executive director of www.takeback.org. Please call 334.329.7258 or email to track down any of his team. Click for Fox News appearances after Dave Brat’s upset of Eric Cantor, or here for media stories from The Washington Post, Drudge Report, USA Today, Newsmax, The New York Times and hundreds of others.

John Pudner
The Western Journal publishes select Op-Eds submitted by our readers. If you would like to submit an Op-Ed, fill out a submission form here: https://www.westernjournal.com/writeforus/.
To Solve the Opioid Crisis, Get Tough on the Border and with Foreign Adversaries
It's Official - the Democrats Are the Party of Open Borders
Epoch Times: Our Response to NBC News' Inappropriate Questions
Insurance Companies Impede Health Care Reforms
Kelli Ward: Trump's Victories Are Stacking Up in Arizona
See more...