Dwayne “The Rock” Johnson has become an iconic action movie star since his career in wrestling. Despite his slightly intimidating exterior, he shows us his comedic personality in movies like “Jumanji: Welcome to the Jungle” and “Moana.”

Because he has had such a successful career, it’s hard to imagine that he could struggle with a dark past. But as he said on Twitter, “depression never discriminates.”

Gorillas weren’t the only animals I spent time with for my RAMPAGE research. Luckily, I’m a country boy who lives only a few miles from the swamps of the Florida Everglades. I do a lot of fishin’ and truckin’ down here and these gators are some of my favorite fresh water species. They’ve been rompin’ and chompin’ for 37 million years. Incredible animal.. especially once I’m able to calm ‘em, then I’m really able to appreciate up close. *Important legal disclaimer: If you come across a gator, don’t try doing this. You’ll lose a limb or something much worse. Call the Fish and Wildlife Commission or WorldStar. #LizzieLoves2RompAndChomp #ButDaddyDoes2 RAMPAGE WORLDWIDE APRIL 13th 🐊🦍🐺

His struggle with depression started when Dwayne was only 15. His mother, Ata Johnson, was battling her own demons at the time.

One day, she pulled the car over on Interstate 65 in Nashville, Tennessee, and walked out into oncoming traffic.

“Big rigs and cars were swerving out the way. I grabbed her and pulled her back on the gravel shoulder of the road,” he recalled.

Ata was so consumed by her depression that she doesn’t even remember her suicide attempt. He said, “She has no recollection of it whatsoever. Probably best she doesn’t.”

But her son will never forget that day. Dwayne now identifies it as his lowest point. He remembers losing motivation to go anywhere or do anything and “constantly” crying.

“We both healed but we’ve always got to do our best to pay attention when other people are in pain,” he petitioned. “We have to help them through it and remind them they are not alone.”

He humbly recognizes that if he had not found healing, that he would be suicidal just like his mother. He instead uses his struggle to help others with theirs.

He reached out to English actress Davina McCall on Twitter after her divorce in 2017.

“She is going through a difficult time at the moment, so my advice to her is to just keep on going,” he told the Sun. “I’ve been there, I have been in a dark place, and if there’s one thing she needs it is to talk things out, because nobody should be suffering in silence.”

He continues to encourage those around him to not give up. He also stresses the importance of talking about your struggles with others.

Dwayne tweeted, “Took me a long time to realize it but the key is to not be afraid to open up. Especially us dudes have a tendency to keep it in. You’re not alone.” 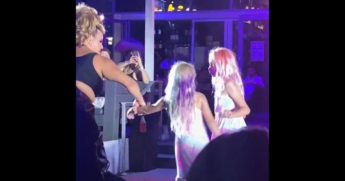