Amid the throes of a presumed stateside peak in the COVID-19 pandemic, hosts and staff at one of the nation’s most popular virus-related radio shows awoke Monday morning to find their social media reach greatly curtailed.

“We didn’t actually even receive a notification. We only realized this morning, when we log in to do the show promo in the morning, that, ‘Oh, we can’t tweet.’ And that was about 8 a.m. this morning but, then, it had been fine and working the day before,” Kassam said Monday.

BREAKING: Twitter has suspended Steve Bannon’s @WarRoomPandemic, the first podcast in America that warned about the danger of the coronavirus outbreak pic.twitter.com/k8e07XIgOK

An offshoot of earlier daily impeachment and 2020 presidential election programs hosted and produced by Bannon, “War Room: Pandemic” was launched in January as one of the first news broadcasts dedicated solely to covering the coronavirus — which had yet to enter the mainstream American consciousness at the time.

Chartable data and site analytics suggest “War Room” ranks in the Top 100 in terms of viewership as both a “News” and “Politics” broadcast on Apple Podcasts in the United States and the United Kingdom.

The show has been deeply critical in its coverage of the Chinese Communist Party’s handling of the initial viral outbreak in Wuhan at the outset of the year, and “War Room” staff suggested in a Monday statement that they believed it may have been suspended as a result of Chinese governmental efforts to report its social media accounts en masse.

“If the CCP has that much impact on Jack Dorsey’s team and their decisions, they should come out and say so outright. That’s the only explanation,” a spokesman for the program said. “We don’t promote fake news or conspiracy theories. We simply point the fingers of responsibility squarely at the Chinese Communist Party.”

Kassam echoed that sentiment, suggesting he believed CCP web-crawling software was being used to “mass report” promotional tweets regarding the show.

Twitter, for its part, claimed the suspension had come as a result of the site’s automatic spam filtering process.

“Your account was suspended because we found that it was in violation of the Twitter Rules,” the Silicon Valley giant’s support team informed “War Room” Monday afternoon when an explanation for the suspension was finally issued.

Related:
Libs Of TikTok Threatens to Sue Twitter After Another Suspension, 'They Have to Make Up Violations' 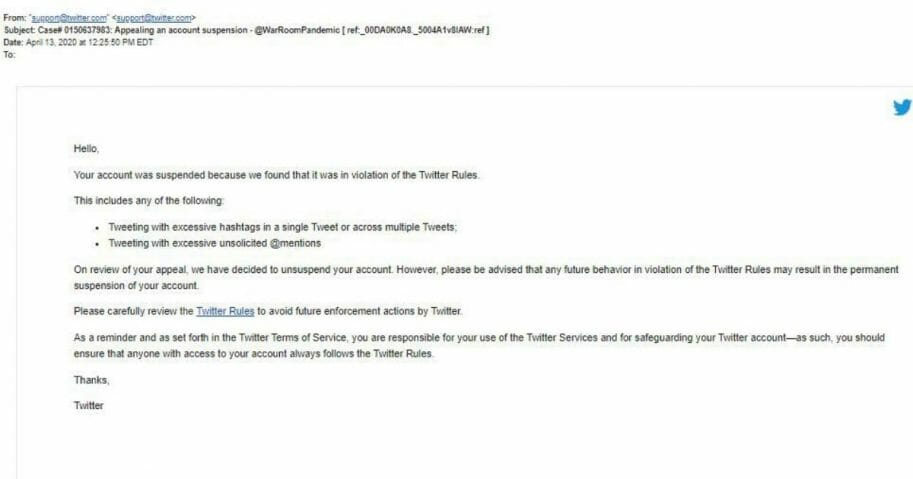 According to Kassam, however, “War Room” rarely engages with Twitter’s hashtag trending system.

Twitter would later go on to reinstate “War Room: Pandemic” on the platform, telling The Western Journal in an official statement that the account had been “mistakenly caught in a spam filter.”

Still, the platform’s violation notice to “War Room” threatened “any future behavior in violation of the Twitter Rules may result in the permanent suspension of your account.”

Kassam, no stranger to Big Tech censorship himself, was hesitant Monday to accept claims from Twitter that the account suspension had been a simple mistake, suggesting instead that it was likely a political decision — and a dangerous one at that.

“For a lot of people, we have become their go-to place for information related to a global pandemic. … And without warning, in the dead of night on a Sunday night, Twitter decides that, for all those people who had decided to take this one information source, that they were going to restrict their access to that,” Kassam said.

“Now, I’ll have the argument all day, every day about Twitter picking political sides — but the pandemic show isn’t a political show. It’s an informational show. … And for Twitter to do that, I think, is an attack on people’s access to information that could keep them alive,” he said.

Jason Miller, fellow co-host and chief spokesman for the 2016 Trump presidential campaign, voiced similar attitudes in a Monday news conference regarding the suspension, accusing Twitter founder and CEO Jack Dorsey of attempting to cozy up to the CCP in order to protect company access to Chinese markets.

“Twitter’s suppression of pro-democracy, anti-CCP voices has become a joke,” Miller said. “‘War Room: Pandemic’ was months ahead of the mainstream media in covering the coronavirus pandemic and the CCP’s cover-up that cost us tens of thousands of American lives. So which team are you on, Jack?”

“You never hear left-of-center or pro-globalist forces complaining about being banned or shadow banned on Twitter,” Miller later told The Western Journal.

He covered the Barrett confirmation and 2020 presidential election for The Western Journal. His work has also appeared in The Daily Caller.