In attempts to subvert media criticism, Facebook has now hired The Daily Telegraph to run a series of articles praising Facebook.

Business Insider reports that Facebook has partnered with The Daily Telegraph to feature stories defending the company from topics it has recently gotten into hot water with, such as terrorist content, cyber bullying and hate speech.

This series of stories is called “Being human in the information age.” 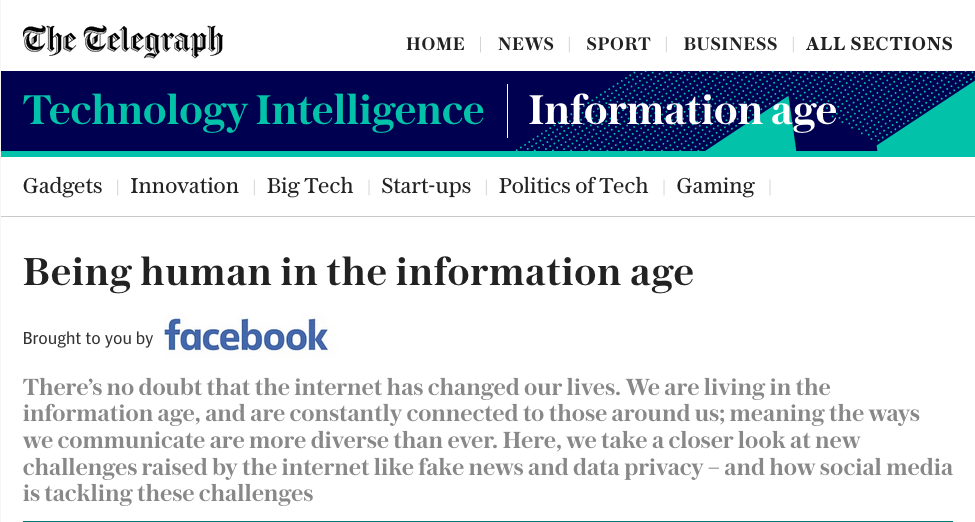 Screenshot of the front page of “Being human in the information age,” a new series of positive articles on Facebook written by The Daily Telegraph. (Screenshot provided by The Daily Caller News Foundation)

“There’s no doubt that the internet has changed our lives,” reads the front page of the series.

TRENDING: It's Now So Bad Even a Clinton Adviser Is Warning About Biden, COVID and a Totalitarian Police State

“We are living in the information age and are constantly connected to those around us; meaning the ways we communicate are more diverse than ever.

“Here, we take a closer look at new challenges raised by the internet like fake news and data privacy — and how social media is tackling these challenges.”

The positive series of stories include titles such as “Why Facebook’s mission is to bring the world closer together,” “How to deal with cyberbullying” and “How donating on Facebook has transformed fundraising.”

Facebook spokesperson Vicky Gomes said in an email that “this is a part of our larger marketing efforts in the UK with the goal of educating and driving awareness of our local investments, initiatives, and partnerships here in the UK that have a positive impact on people’s lives.”

Facebook has come under fire recently for its tardiness in pulling down videos of the Christchurch New Zealand shootings.

Facebook has also been criticized for potentially censoring conservatives, as well as targeting with ads that discriminate based on age and gender — even when told not to.

“While Google, YouTube, Facebook and Twitter all say that they’re cooperating and acting in the best interest of citizens to remove this content, they’re actually not because they’re allowing these videos to reappear all the time,” said Lucinda Creighton, a senior adviser at international policy organization the Counter Extremism Project, in reference to the graphic videos of the Christchurch shootings on social media.