Facebook reportedly pulled an ad from President Donald Trump’s re-election campaign that targeted women because it was in violation of its ads policies.

Popular Information reached out to Facebook about the ad, arguing it was in violation of the social media company’s prohibition against identifying “personal attributes.”

In this case, the personal attribute was gender identity — womanhood.

Facebook’s advertising guidelines explain that “ads must not contain content that asserts or implies personal attributes,” including, among other things, “direct or indirect assertions or implications about a person’s … gender identity.”

The ad in question pictures a group of women with the caption, “the Women for Trump Coalition needs the support of strong women like you!”

TRENDING: Candace Owens Schools Fact-Checker and the Result Is Incredible

“The Women for Trump Coalition needs the support of strong women like you!” pic.twitter.com/vR2QzNAFq5

In other words, it is apparently wrong to assert the people in the picture are women, and if you look like them, you should not feel any pressure to identify that way.

Facebook confirmed to both Popular Information and Gizmodo that the ad was out of compliance with its rules.

“Can confirm we notified the campaign that the ads violate policy,” a Facebook spokesperson wrote in an email to Gizmodo. “They cannot continue to run unless fixed.”

“We know that machines and human reviewers make mistakes, which is why the ad review system and enforcement aren’t perfect and we won’t catch every ad,” a spokesperson told Gizmodo.

According to The Times, the campaign has spent $15.5 million in digital ads so far this year.

By comparison, the closest Democrat, Sen. Bernie Sanders of Vermont, had spent $5.5 million.

Do not be surprised going forward if Trump’s campaign ads continue to receive complaints from many corners that they are somehow out of compliance with various rules — real, imagined or ridiculous. 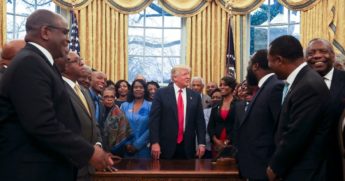