China’s all-consuming drive to become a world superpower made a massive leap recently as the communist giant began mass production of a game-changing piece of equipment.

Worst of all, this weapon further closes the arms gap between the Asian power and the United States, meaning American interests in the Pacific might soon be in jeopardy.

This marks China’s first heavy entry into the family of fifth-generation fighters, which previously included only the small number of original J-20 fighters the country produced as well as America’s many F-22 and F-35 jets.

The new J-20B comes with thrust vector control, something its predecessor did not have.

Thrust vector control gives aircraft greater maneuverability in the air, which in turn could lend a winning edge in confrontations. With the addition of the TVC system and several other upgrades, this J-20 iteration is now an undisputed fifth-generation fighter.

The cutting-edge fighters are a must for air superiority against a modern power, something the United States holds a near-monopoly on when it comes to world air forces.

Now, the tide is shifting.

China’s growing military-industrial capacity means the country can now crank out four of the fighters every month.

While this might seem minor, it’s unlikely the communist government will be content with so few of the superior aircraft being produced.

The fighter, a Chinese creation, also signals a shift away from shoddy copycat designs that dominated the country’s military for much of the 20th century.

Photos of the jets appear to show many hallmarks of a modern stealth fighter, from the sweeping angles meant to muddy its signature on surveillance equipment to gray paint with a dull sheen formulated to absorb incoming radar waves. 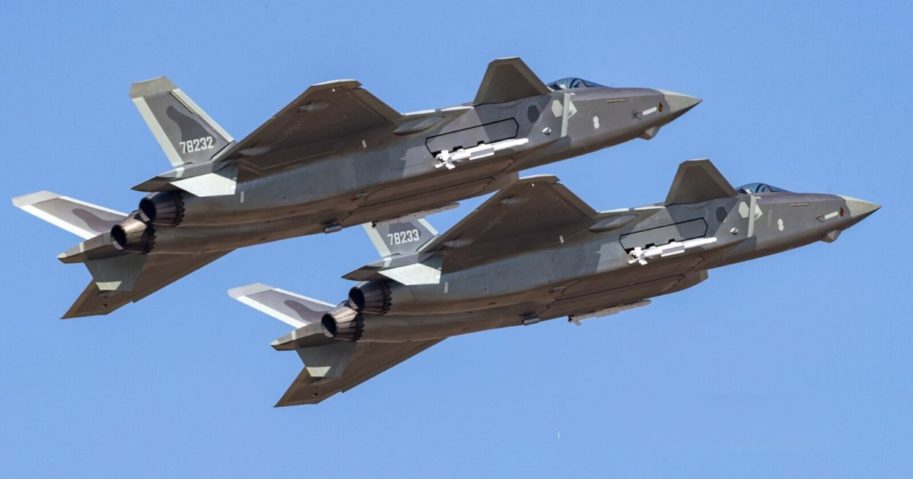 J-20 series fighters perform stunts at an air show in Changchun, China, in October. (Yang Pang / Ministry of National Defense of the People’s Republic of China)

The announcement of the J-20B comes as China strengthens its position in the South China Sea.

Related:
USMC to Change Fundamental Element of the Corps, Shrink in Size

While the U.S. Navy now rules the waves in the area, keeping China’s ambitions in check, decades of preparation by the communist juggernaut might mean the two powers are barreling toward a violent confrontation.

To combat America’s unmatched naval power, which is centered around aircraft carriers and projection of power, China simply designed and built hypersonic missiles that our ships currently have no effective defense against.

Additionally, a shift away from aircraft carriers seems all but inevitable in the 21st century. With the advent of advanced computing and missile technology, the slow, lumbering ships make for easy targets.

Even if the Navy develops a counter against the missiles, China can build the ship-killers faster than America can replace what they sink.

As China rattles its saber and threatens to conquer the island of Taiwan, finally closing the book on the Chinese Civil War and ensuring communist hegemony over all of the middle kingdom, it’s clear we need a renewed focus on the region.

Closer military relations with Taiwan, Japan and Australia would ramp up the pressure on China, giving the country more nations to contend with in the disputed South China Sea.

Ordering more freedom of navigation exercises in the region will also put China in an uncomfortable position as it works to build a military that can compete with America’s.

For now, China’s military advances are in the fledgling stages. Given time and the complacency of the free world, this could soon become a major and unavoidable threat to world peace.