If you were reading the original version of The Hill’s recent piece on South Dakota’s proposed bill on treatments for transgender youth, the first paragraph probably sounded exceptionally dire.

“A new bill in South Dakota would make it illegal to provide health care to transgender minors,” began the piece by Alexandra Kelley — published last week in The Hill’s “Changing America” section, which deals with issues surrounding diversity and inclusion.

Most readers, I’m pretty sure, would overlook the most inexact aspect of that sentence and assume, given the context, that not all health care was being denied to transgender minors. (For instance, should transgender youths have the flu, I’m pretty sure writer Kelley wasn’t implying they would have to be turned away at the pediatrician’s.)

Even in context, however, it sounded pretty dire: House Bill 1057, the legislation she was referring to, would apparently put in place a ban on all health care related to gender dysphoria or transgender identity for individuals under the age of 18.

This comes across as pretty dangerous stuff, particularly since Kelley noted in the second paragraph that “the bill has reportedly been fast-tracked to go up for a vote in South Dakota’s House of Representatives on Friday.” Especially given that this was being championed by the state GOP, this was going to be explosive. 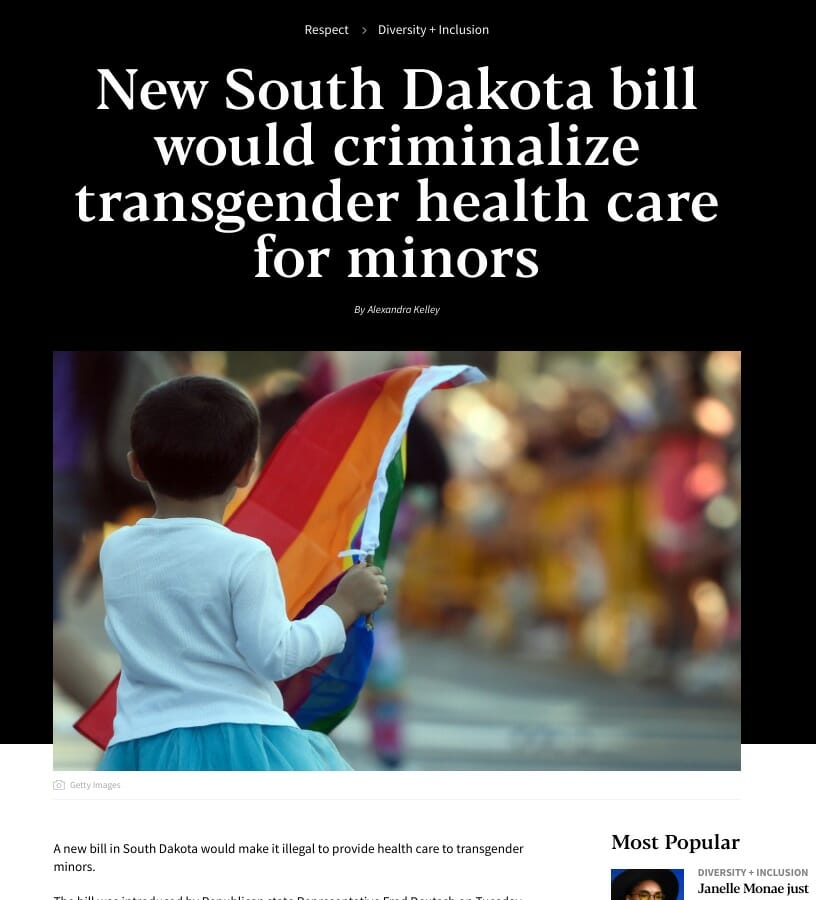 In paragraph number three, Kelley entirely contradicted the explosive opening lede to reveal legislation of a much more prosaic and cautious sort.

“House Bill 1057 would make it a Class 4 felony for a medical professional to perform a gender-affirming operation or surgery, as well as prescribing hormone replacement therapy to aid a child’s gender transition or in an attempt ‘to change or affirm the minor’s perception of the minor’s sex, if that perception is inconsistent with the minor’s sex,’ according to the text,” Kelley wrote.

Republican state Rep. Fred Deutsch, who introduced what he named the Vulnerable Child Protection Act, “reportedly referred to the pending legislation as a ‘pause button’ for minors experiencing gender dysphoria, a condition where a person feels distress when their gender identity differs from their sex assigned at birth.”

This isn’t quite the exact definition of gender dysphoria, but we’ll drop that for now, since it clearly wasn’t the most glaring example of how inexactitude is used in the service of a political predisposition here.

House Bill 1057 obviously wouldn’t “make it illegal to provide health care to transgender minors.” What it would do is delay two treatments that have irreversible side effects, until the individuals in question are of the age of majority and can make those decisions for their own. Surgeries like genitoplasty and hormone therapies carry risks and lifelong consequences, including sterility and other adverse health outcomes.

A legal “pause button” for decisions like this being made by minors, particularly when the science is in its nascent stages, doesn’t exactly sound like it would “make it illegal to provide health care to transgender minors.”

To be fair to The Hill, when The Western Journal contacted the publication about the story’s original opening, it was promptly changed.

“Thank you for bringing this to our attention. This post has been updated with the first line rephrased,” The Hill said in a statement to The Western Journal.

The opening sentence now reads: “A new bill in South Dakota would make it illegal to provide gender-affirming surgery or hormone replacement therapy to transgender minors.” Which is, well, accurate.

However, it’s worth noting that no correction was issued. Instead, an addendum to the article reads, “Updated Friday at 11:31 a.m.” What was updated and why remains unmentioned. Which is, well, important. Editorial standards at The Western Journal — indeed, at most journalistic organizations — would be to issue a correction if there was this kind of dramatic mischaracterization.

This isn’t to say the legislation isn’t controversial, mind you.

Deutsch is a lightning rod for legislation involving transgender teens, having previously introduced a 2016 bill limiting transgender access to school bathrooms and locker rooms that was ultimately vetoed by the governor.

The American Civil Liberties Union, in particular, has come out strongly against the hormone-replacement bill, saying it was part of a “streak of discrimination of transgender youth in the state.” Also, at least at present, surgeries for transgender-identifying individuals under 18 are generally discouraged by medical authorities, according to an NBC report — although, of course, that could change at some point in the future.

For his part, Deutsch cast the decision as a matter of prudence.

“Every child in South Dakota should be protected from dangerous drugs and procedures,” he wrote in an email to National Review.

“The solution for children’s identification with the opposite sex isn’t to poison their bodies with mega-doses of the wrong hormones, to chemically or surgically castrate and sterilize them, or to remove healthy breasts and reproductive organs. The solution is compassionate care, and that doesn’t include catastrophically and irreversibly altering their bodies.”

Unbelievably, The Hill wasn’t the only publication where the bill was construed in the lede as blocking all transgender health care to those under 18, although the other sources I managed to find don’t make any pretense of being objective.

In the scaremongering Olympics, Igor Derysh at Salon managed to take the gold: “South Dakota Republicans rallied around a new bill this week that would jail doctors for up to a decade if they provide transgender health care to minors,” Derysh’s article on the bill began.

Then again, this is Salon, where a quick perusal of the front-page stories as of Sunday morning was instructive: “Former GOP strategist Rick Wilson: “F**king hating” Trump is the key to winning in 2020.” “Hillary Clinton discusses being ‘the Rorschach test for women’ and urges voters to take out Trump.” “Why the Senate’s impeachment trial has way too much in common with the Jim Crow past.”

If you’re a regular reader of The Hill, you may notice a decided difference in tone.

The media has a demonstrable bias against both the GOP and social conservatives on issues regarding transgender youth. The Hill is usually better than most, and yet the lede to this story proves how reflexive and pervasive this line of thinking is.

It’s crucial that the media is held to account on this — and that corrections are issued when they get it this wrong. In this case, The Hill managed to get it half-right.