Hollywood isn’t a particularly a big fan of the American flag — especially one that might be the most iconic flag of all time.

As you may have heard, a new biopic about Neil Armstrong is about to be released. “First Man” obviously climaxes with Armstrong — played by Ryan Gosling — landing on the moon.

But there’s one little problem that everyone notice when the film premiered this week at the Venice Film Festival.

The U.K. Telegraph reports the film “has chosen to leave out this most patriotic of scenes, arguing that the giant leap for mankind should not be seen as an example of American greatness.”

“The film, ‘First Man,’ was unveiled at the Venice Film Festival yesterday, where the absence of the stars and stripes was noted by critics.”

This, apparently, is what they don’t want you to see: 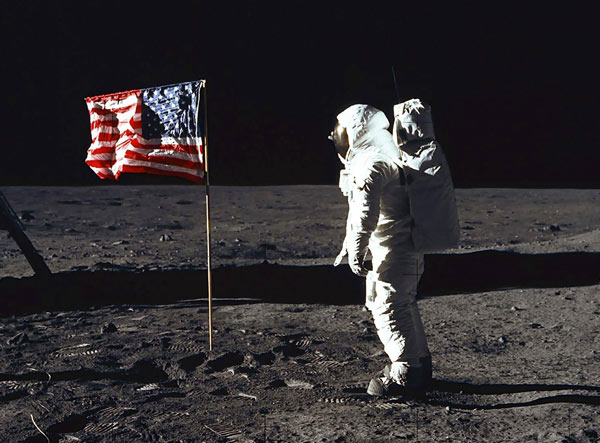 This is arguably the most iconic American flag in history.

It cost $5.50 to produce in New Jersey, according to MensXP. It was only one of six that were planted on the moon’s surface back in 1969.

It was likely knocked over when the lunar module took back off, due to the blast. If not, ultraviolet rays and moon dust would have certainly ruined it by now.

Yet, that $5.50 flag represented billions of dollars and boundless hours spent by engineers, astronauts, scientists, programmers, riveters, janitors, everyone at NASA making sure that we not only reached the moon but did it before the Soviet Union did.

Gosling said the flag was left out because the moon landing “transcended countries and borders.”

“I think this was widely regarded in the end as a human achievement (and) that’s how we chose to view it,” Gosling said.

“I also think Neil was extremely humble, as were many of these astronauts, and time and time again he deferred the focus from himself to the 400,000 people who made the mission possible.”

And that flag represented every one of those people who made the mission possible. It only transcended countries and borders because those Americans made it happen. This is a slap in the face to every one of them.

To leave out the moment is to erase history. It’s saying that, to transcend borders, one must erase them entirely — erase nations and even ideologies. If it was so transcendent, it was the Soviet Union’s victory too, right? And Cuba’s? And China’s?

That argument is every bit as ridiculous as erasing that picture. It was the whole reason this landing happen — because America chose to do it and willed it into happening. Without that, there would be no film. There would be no moon landing — or if there was, it would be a Soviet flag planted on the lunar surface.

That’s how scared of national pride the left is, folks. This is a scary place and a scary time we’re in.