The mainstream media never fails to exploit a crisis, and COVID-19 is no exception.

Since the beginning, the media has sought to use the situation as a way to undermine President Donald Trump.

MSNBC host Andrea Mitchell continued the effort on Monday, citing a Washington Post article that attempted to place blame for the spread of the virus at Trump’s feet.

“Well, ‘denial’ and ‘dysfunction’ have been the two words of the day, words that are used by The Washington Post in a searing account of the failures of the Trump administration to take COVID-19 seriously as the virus made its way from China into the U.S.,” Mitchell said, according to NewsBusters.

“For more than two months, time was squandered, warnings ignored, President Trump dismissing the virus as a hoax initially, only to lash out at the press and boast about his social media following.”

Contrary to the establishment media narrative of the administration having been in denial, Trump banned travel of foreign nationals from China to the U.S. on Jan. 31, one day after the Centers for Disease Control and Prevention confirmed human-to-human transmission of the virus in the United States.

This does not sound like the action of an administration in denial.

As for Mitchell’s assertion that Trump dismissed the virus as a hoax, even the liberal-leaning fact-checker Snopes has debunked this claim.

Trump did not call the virus itself a hoax. He said the attempts by Democrats and those in the media to blame the virus on him were a new hoax, a claim that seems to have been confirmed by their subsequent behavior.

For his decision to ban travel from China, Trump was ridiculed by the media and by Democrats, including former Vice President Joe Biden, who accused him of “xenophobia.”

“We are in the midst of a crisis with the coronavirus. We need to lead the way with science — not Donald Trump’s record of hysteria, xenophobia, and fear-mongering. He is the worst possible person to lead our country through a global health emergency,” Biden tweeted.

We are in the midst of a crisis with the coronavirus. We need to lead the way with science — not Donald Trump’s record of hysteria, xenophobia, and fear-mongering. He is the worst possible person to lead our country through a global health emergency.

For weeks after Trump’s decision to restrict travel from China, prominent Democrats demonstrated they were not taking the threat of the virus seriously.

RELATED: Sciascia: US Lockdowns Are Done, So if You Want To Stay Home, Nobody Is Stopping You

“We want to be vigilant about what is out there in other places,” she said at the time. “We want to be careful about how we deal with it, but we do want to say to people, ‘Come to Chinatown, here we are — we’re, again, careful, safe — and come join us.’”

On March 2, New York City Mayor Bill de Blasio encouraged people “to go on with your lives + get out on the town despite Coronavirus.”

Since I’m encouraging New Yorkers to go on with your lives + get out on the town despite Coronavirus, I thought I would offer some suggestions. Here’s the first: thru Thurs 3/5 go see “The Traitor” @FilmLinc. If “The Wire” was a true story + set in Italy, it would be this film.

And on March 10, long after the White House coronavirus task force was up and running, New York Democratic Rep. Alexandria Ocasio-Cortez was encouraging people to go out to Chinese restaurants because the establishments were “feeling the pain of racism.”

These statements from prominent Democrats sound an awful lot like denial, certainly more so than anything coming from the Trump administration during the same time period.

But, of course, the media does not care about that. With every story, their only concern is how it can best be used to hurt Trump.

That effort continues to this day, and it has now broadened to include not only Trump, but also his supporters.

Citing The Post piece, Mitchell asserted Monday that “there were a number of people in red states early on who didn’t heed the warnings to socially distance because they believed the president’s false comments.”

Instead of criticizing liberal politicians representing urban constituencies for not taking the virus as seriously as they should, she opted to focus on people living in “red states” instead.

But thus far, the hardest-hit areas have not been “red” areas — they’ve been liberal-run cities in states that are either predominantly run by Democrats or that have at least a Democratic governor.

There were roughly 423,135 confirmed coronavirus cases in the U.S. as of Wednesday afternoon, according to data from Johns Hopkins.

New York state, which is dominated by Democratic politicians, had a whopping 150,697 cases, or roughly 36 percent of the nationwide total.

But MSNBC has a narrative to push, and that narrative means slamming Trump and his supporters whenever possible.

As the coronavirus fallout continues, so will the deflections from Democrats and their allies in the establishment media.

Fortunately, Trump is not afraid to set the record straight. And if polling is any indication, it appears his determination is working.

President Trump understands that he is fighting a war on two fronts.

As his administration combats the coronavirus, he must also combat the relentless media narrative that looks to blame him. 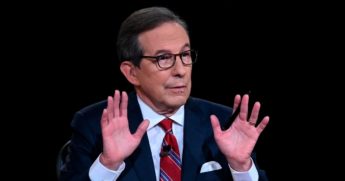