When former FBI Deputy Director Andrew McCabe appeared before the Senate Judiciary Committee earlier this month to answer for his role in approving FISA court warrants that allowed the bureau to surveil former Trump campaign adviser Carter Page back in 2016, Democrats were eager to turn the page and talk about healing.

“The election sent a clear message, it’s time to stop re-litigating issues of the last election,” said Illinois Democrat Sen. Dick Durbin during the Nov. 10 hearing. “It’s time, finally, to put behind us the divisiveness [and] vitriol of the Trump era and to bring our fractured country together.”

This was an interesting tack to take, inasmuch as the investigation into baseless allegations that the Trump 2016 presidential campaign “colluded” with Russia began in earnest with the warrants issued by the special court established by the Foreign Intelligence Surveillance Act.

“Russia collusion” talk then dragged on until weeks before the 2020 election, when problematic emails from Hunter Biden’s laptop were alleged, in the absence of the merest piece of public evidence, to be a product of a Kremlin misinformation and colored basically every moment in between those two bookends.

But, yes, let’s put that childish divisiveness behind us. Don’t look back in anger or re-litigate the past. 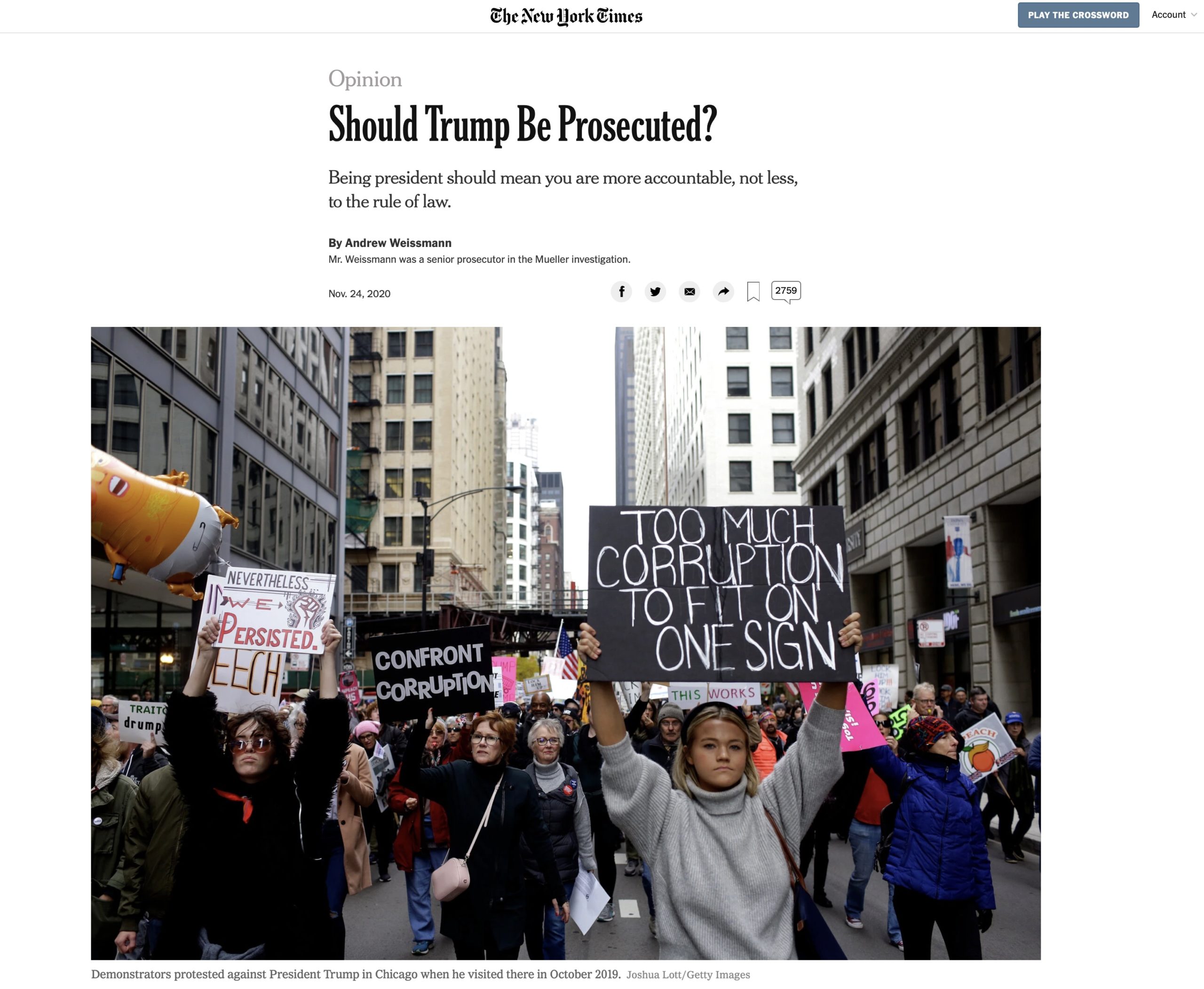 Unless the Democrats are in a position to do so, of course. The article cited above is from Andrew Weissman, a senior prosecutor for special counsel Robert Mueller. The headline may be phrased as an open-ended question, but the article certainly isn’t:

Weissman assumes former Vice President Joe Biden will be sworn into the presidency in January and demands a Biden administration investigate Trump, writing that “as painful and hard as it may be for the country, I believe the next attorney general should investigate Mr. Trump and, if warranted, prosecute him for potential federal crimes.”

“Mr. Trump’s criminal exposure is clear. I was a senior member of the investigation led by the former special counsel Robert Mueller to determine whether Russia attempted to subvert our fundamental democratic source of political legitimacy: our electoral system,” Weissman wrote.

“Among other things, he was tasked with determining whether Mr. Trump interfered with our fact-finding into this issue.

“We amassed ample evidence to support a charge that Mr. Trump obstructed justice. That view is widely shared. Shortly after our report was issued, hundreds of former prosecutors concluded that the evidence supported such a charge.”

Granted, you could make the same argument for those who supported Trump in these matters.

However, when Mr. Weissman wrings his hands about how “we have witnessed two U.S. presidential elections in which large crowds have found it acceptable to chant with fervent zeal that the nominee of the opposing party should be jailed” and writes that “[w]e do not want to turn into an autocratic state, where law enforcement authorities are political weapons of the reigning party,” he seems willfully negligent of the partisan nature of the criminal investigations he proposes the United States should undertake.

For example, Weissman contends that Trump acted to “thwart cooperation with an investigation by use of the clemency power” when he commuted the prison sentence of political confidant Roger Stone, who had been sentenced to more than three years in prison after a witness tampering conviction related to a House investigation of the Russia “collusion” charge.

Weissman writes that Stone was “convicted by a jury,” but never mentions that the forewoman of that jury was a known Democratic activist with a public distaste for Trump and his supporters.

It’s important to note that Trump’s action did not affect Stone’s conviction, only his prison sentence.

At a time when sex offenders are being released because of COVID fears, the idea Weissman is shaking his fist at Trump for granting clemency to a 67-year-old man in questionable health because he was convicted of lying by a jury with a clearly biased forewoman indicates this is maybe not the guy to be talking about weaponized investigations.

Weissman also brings up the conviction of one-time Trump campaign chairman Paul Manafort. He writes of Trump’s  “efforts to influence the outcome of a deliberating jury in the Manafort trial,” which sounds damning unless you remember what he’s referring to.

This was when the president, asked by about the 2018 trial of his former campaign manager on charges of tax fraud and bank fraud, among other counts, said that “I think it’s very sad what they’ve done to Paul Manafort.” A slew of predictable media liberals then claimed the comments were tantamount to jury tampering.

Weissman’s piece clocks in at under a thousand words. If that’s one of the arguments he even feels the need to bring up in that limited space, I’m calling for summary judgment. I’m hoping its inclusion here is only because Weissman was the lead prosecutor in the Manafort case and because he thinks it’s one of the stronger points in his favor.

There’s a bunch of other stuff here that you’ve probably heard before, too:

Former White House counsel Don McGahn’s allegation that Trump wanted to fire Mueller (he didn’t do it) and then asked him to sign a letter saying this never happened (McGahn didn’t). Trump “dangl[ing] a pardon” to get people not to testify. Weissman even intimates that there might have been collusion, but Mueller’s team just couldn’t investigate fully because “he obstructed that very investigation.” We’re back on that tired old dog.

Weissman isn’t the only one flogging a “Hoo doggies! We can go after The Donald now!” piece in the media this past week. Watergate counsel Philip Allen Lacovara has a materially similar article in The Washington Post and Jeet Heer has one in The Nation.

Weissman’s article holds the most gravitas, however, if just because he was a former prosecutor under Robert Mueller. Of course, Weissman never mentions that he’d planned to speak at a fundraiser for Biden in June before the event was canceled, presumably because even Democrats knew it looked bad. This has nothing to do with “law enforcement authorities [being] political weapons of the reigning party.”

For the most part, Biden doesn’t seem disposed to follow Weissman’s advice — yet. According to NBC News, a Biden adviser said Biden’s “overarching view is that we need to move the country forward … [b]ut the most important thing on this is that he will not interfere with his Justice Department and not politicize his Justice Department.”

That may not be looking to turn the page so much as could be a matter of expedience. How long have we played this game now? Four years? Trump’s head has been poorly photoshopped into an orange jumpsuit more times than any of us can count.

Yet, after four years of trying to legally stymie the president of the United States, they got nowhere. If and when Trump loses the protections afforded him by the presidency, are we to assume this will be any different?

Will the Andrew Weissmans of the world be able to convince half of American — not to mention a jury — that Trump’s offhand remarks about Paul Manafort magically amounted to tampering?

But yes, let’s turn the page. We need to put “divisiveness [and] vitriol” behind us, to quote Sen. Durbin. Let’s see how many Democrats get behind that.