Apparently, not even being one of the best players in the NFL can shield you from the cancel culture mob mentality on Twitter.

The best player on the Dallas Cowboys, by virtually any metric, just took President Joe Biden to task over the reported prisoner swap of WNBA star Brittney Griner for Russian arms dealer Viktor Bout, before rapidly backpedaling like he was sitting deep in a Cover 3.

All-Pro linebacker Micah Parsons, considered by many to be the best young linebacker in the NFL, first pointed out the absurdity of the Biden administration’s deal not including the return of retired Marine Paul Whelan, who has been held in Russia since 2018 on dubious charges.

That’s a very salient point. While nobody truly knows what was feasible in the negotiations between U.S. and Russian officials, the fact that the administration opted to bring back a professional athlete who broke Russian law (knowingly or unknowingly) instead of a man who served this country is, at the very least, poor optics.

And Parsons, given his massive platform as the feature act on arguably the NFL’s feature team, was well within his rights to question that.

But don’t let the mob hear that. When he followed up with a harsher tweet — this time directed at Biden — he faced a wave of criticism on Twitter and soon deleted the post.

“We still not voting for you!” Parsons had said in a retweet of Biden’s announcement regarding Griner. 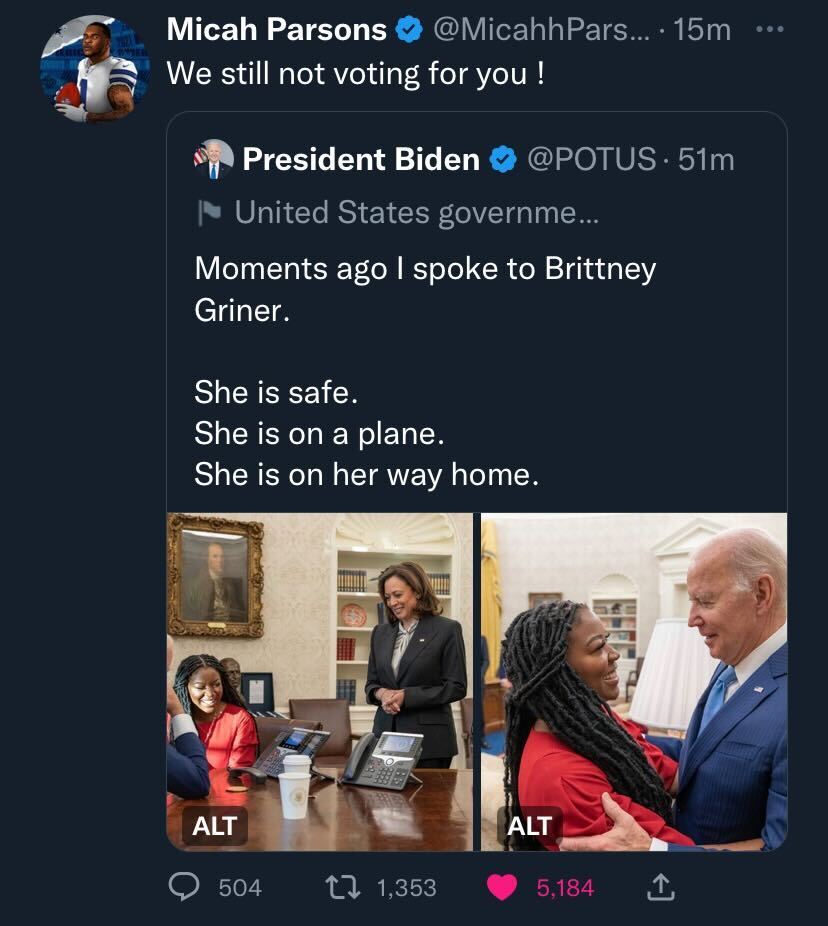 Again, this is a more than fair sentiment. Nobody — not Biden or former President Donald Trump or anybody else — is “entitled” to a vote. They have to earn it, and if Biden hasn’t earned Parson’s, that should be that.

Alas, that wasn’t that. After Parsons deleted the tweet burying Biden, he issued some explanatory/apologetic tweets.

“My last tweet was no shot at Brittney Griner,” he said. “I’m super happy she’s back home as she should be. I just have family who have served and it’s crazy to me the President wouldn’t bring him home too. I’m the furthest thing from a trump supporter but I’m not a fan of Biden either.”

My last tweet was no shot at Brittney Griner. I’m super happy she’s back home as she should be. I just have family who have served and it’s crazy to me the President wouldn’t bring him home too. I’m the furthest thing from a trump supporter but I’m not a fan of Biden either.

While it’s not clear how a tweet about not voting for Biden could ever be construed as a “shot at Brittney Griner,” the backlash was enough for Parsons to delete that tweet.

“Just spoke to some people that I respect and trust. I should have been more educated on the topic and not tweeted out of emotion for my family and other who have served. For that I apologize,” the linebacker said in another tweet.

“Also if what I’m told about the attempts to bring Ret Marine Paul Whelan home are true then the best outcome was accomplished,” he said. “I pray Mr. Whelan comes home but am extremely happy for Brittney and her family. I am not too prideful to admit when I’ve made a mistake.”

then the best outcome was accomplished. I pray Mr. Whelan comes home but am extremely happy for Brittney and her family. I am not too prideful to admit when I’ve made a mistake.

Again, what mistake? The mistake of offending the mob?

A cursory glance at his tweet replies shows that many people feel that Parsons had nothing to apologize for:

Nothing to apologize for…

Why backtrack wasn’t even a bad or negative comment lol

For now, Parson, still just 23, will be leading the Cowboys’ defense as its premiere pass rusher on Sunday when Dallas hosts the Houston Texans. There’s been no indication that his tweet will have any further repercussions.

However, given how quickly he was able to backpedal from it, perhaps he should experiment a bit more with dropping into zone coverage this week.