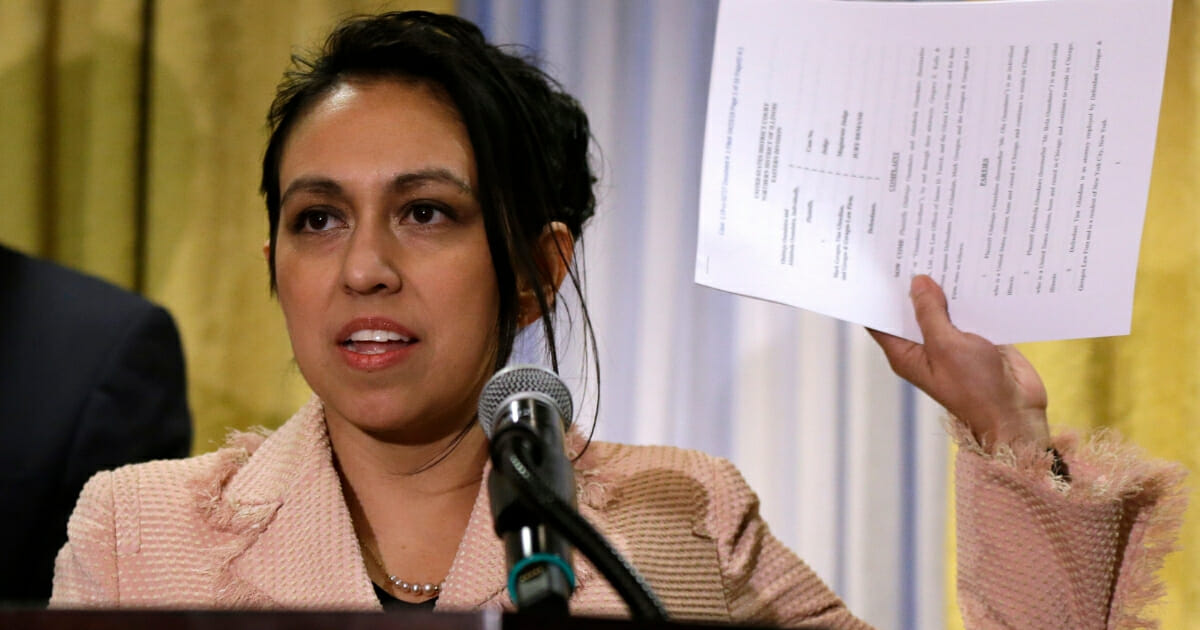 Gloria Schmidt, a lawyer for Olabinjo Osundairo and Abimbola Osundairo, who said they helped Jussie Smollett stage a racist and homophobic attack against himself, speaks during a news conference April 23, 2019, in Chicago. (Kiichiro Sato / AP Photo)

A 16-page lawsuit filed by Abel and Ola Osumdairo’s attorney, Gloria Schmidt, alleges that Mark Geragos and lawyers in his firm continued to make public statements to the media and others that the brothers had “led a criminally homophobic, racist and violent attack against Mr. Smollett,” according to Fox News.

However, Geragos and co-defendent Tina Glandian, an attorney in his firm, knew those accusations weren’t true at the time they made them, according to the suit.

She later said they were “asked to do something by a friend that they trusted, and later that friend betrayed their trust.”

In the lawsuit, the brothers state that Smollett asked them to “help him stage a social media hoax” and that they went along with it because he is a wealthy actor and they “were aspiring to ‘make it’ in Hollywood” Variety reported.

The filing also claimed that the brothers “have suffered and will continue to suffer extreme emotional distress, humiliation, and anxiety, damages to their reputation, and/or damage to current and prospective business relations.”

In an Op-Ed published Saturday on BET.com, Smollett’s brother, Jojo, claimed his brother had been “convicted in the court of public opinion” before the case had even reached the courtroom.

“I have literally seen him violently awakening from night terrors, following the assault,” he wrote. “Some of my siblings, as well as Jussie’s partner and closest friends have seen similar things. While very few people are courageous enough to swim upstream and resist the popular conformity of the day, I still can’t believe how many people failed to ask the question: ‘What if Jussie is telling the truth?'”

The 16 charges against Smollet related to the incident were dropped suddenly by the Cook County State’s Attorney’s Office on March 26, enraging Chicago police and the public.

Smollet and his lawyers continued to maintain his innocence at a news conference directly following the dismissal of all charges.

Schmidt acknowledged that the brothers had taken part in the alleged hoax but said they have apologized for it and only did so because Smollett paid them, the Chicago Sun-Times reported.

“As far as their participation in this publicity stunt, they’ve realized that it was wrong, they’ve apologized for it, and they’ve expressed more than once that they are tremendously regretful for the role that they played in it,” Schmidt said.

The Osundairo brothers “have suffered significant emotional distress and feel unsafe and alienated in their local Chicago community,” the lawsuit states. They are seeking unspecified damages.

Monica Romano
Contributor, News
After beginning her nursing career in the early 90s, Monica quickly discovered how badly government red tape was suffocating the quality of care her patients received. Her work advocating for military and domestic violence survivors suffering from PTSD led her to write and co-produce the short film "Shell Shock." She is an alumna of Act One, a faith-based film school in Hollywood. Monica covers health, lifestyle and politics.
@writegirl67
Monica began her nursing career in Seattle in the early 90s. She quickly discovered that the mounds of red tape created from the government's policies were suffocating the quality of compassionate care her patients received. That inspired her to become a staunch patient advocate and teach others to reclaim their health, communicate effectively with their doctors, and inform themselves of all the treatment options available, including natural remedies.

Monica believes Americans depend too much on doctors and pharmaceuticals and that we need to reclaim the power of our health care and understand the effects of government policies on our daily lives. She later completed her Culinary Arts degree and learned the healing power of foods, herbs and spices. She melds holistic nursing care with the philosophy of the father of medicine, Hippocrates: “Let food be thy medicine and medicine be thy food.”

Her work advocating for military and domestic violence survivors suffering from PTSD led her to write and co-produce the short film, "Shell Shock." The screenplay was honored in the Page International Screenwriting Awards in Hollywood. She is an alumna of Act One, a faith-based film school in Hollywood.

With a passion for both informing and entertaining readers, Monica covers health, lifestyle and politics. She can often be found in her kitchen experimenting with avocados (even avocado chocolate pudding!) and enlisting family and friends to sample her latest creations.