As President Joe Biden uses biblical language (“image of God”) to justify his position on the trans movement and Disney goes woke, Christians can easily get caught up in opposing the crisis du jour. We may find ourselves pointing back to the Judeo-Christian ethic, the nuclear family or the Constitution rather than pointing to Christ.

As the world becomes increasingly proficient at creating and promoting stories that deny God, God’s people will likely be tempted to point others toward stories that seem to deny God just a little less.

Framed in terms of a better or worse choice, many of us would choose capitalism over socialism, democracy over communism, or rationalism over critical theory. However, I often find choices in this context to be similar to the “would you rather” game my kids used to play.

“Would you rather eat dirt or lick the bottom of someone’s shoe?” Even if those are my only options, there isn’t an upside to either. Being slightly less gross doesn’t make eating dirt particularly appealing. Similarly, being slightly less wrongheaded doesn’t make deism a better choice than atheism. From a biblical perspective, there isn’t a great deal of benefit in being “less lost.”

I wonder if pointing to stories that seem to deny God just a little less is another way we are in danger of being taken “captive by philosophy and empty deceit, according to human tradition, according to the elemental spirits of the world, and not according to Christ” (Colossians 2:8). Christians too often have their attention drawn to something like critical race theory while philosophies, policies and laws that hinder our conformity to Christ in more subtle ways go unnoticed. By focusing our attention on one issue or another, we become inattentive to others.

For instance, when CRT was becoming a prominent public issue, some Christian leaders recommended “Cynical Theories” by James Lindsay and Helen Pluckrose. As beneficial as the book may be, it is not something I would recommend. While opposing CRT, it advocates for a way of thought that, as the authors suggest, also opposes religion.

The authors claim that the “preposterous attitudes” associated with critical theory and postmodernism “bear witness to our repeatedly demonstrated capacity to take up complex spiritual worldviews, ranging from tribal animism to hippie spiritualism to sophisticated global religions, each of which adopts its own interpretive frame through which it sees the entire world.”

Do I believe that those Christian leaders who recommended “Cynical Theories” were seeking to undermine Christianity? Not at all. But in their zeal to point people away from CRT, they pointed people toward Lindsay, who, in “Everybody Is Wrong About God,” expressed his desire to help “our society become properly post-God and post-faith.”

My basic assumption is that all human systems have the same flaw: They are neither informed by nor subject to the Word of God. Human systems are human. As such, they all suffer from the limitations of human capacity. As much as we may think we can accomplish, we do not own “the cattle on a thousand hills” (Psalm 50:10). Because we have limited resources, systems that do not entrust themselves to God’s empowering presence will always be faced with the challenge of compromising one value or another as those in charge of them try to ward off death.

To point toward human systems is to point people to solutions that can never result in resurrection.

Christians are to engage the world. To the extent that the governments to which we are subject make provision for us to influence policies that will defend those who cannot defend themselves, it is appropriate for us to do so (and more). Yet we must take care that we do not supplant the way and work of God’s kingdom with the way and work of human systems. We must take care that we don’t point people away from influences that distort God only to point them toward influences that distort God in different, perhaps more palatable, ways.

In the book of Matthew, Jesus speaks of two ways. The way that leads to destruction is wide and easy, whereas the way that leads to life is narrow and hard (7:13-14). Again, in John 14:6, Jesus says, “I am the way, the truth, and the life. No one comes to the Father except through me.” These passages leave no room to seek salvation by any means other than grace through faith (Ephesians 2:8).

May we be a people who point others to the way — that is, Jesus Christ — so they may walk with us in newness of life (Romans 6:4). 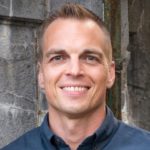 Dr. James Spencer
Dr. James Spencer currently serves as president of the D. L. Moody Center, an independent non-profit organization inspired by the life and ministry of Dwight Moody and dedicated to proclaiming the gospel and challenging God’s people to follow Jesus. His book “Useful to God: Nine Lessons from the Life of D. L. Moody” will be released in 2022. He previously published “Thinking Christian: Essays on Testimony, Accountability, and the Christian Mind” and co-authored “Trajectories: A Gospel-Centered Introduction to Old Testament Theology.”
Op-Ed: Christians, Don't Aim for 'Less Lost' - Point Others to the Way That Leads to Resurrection
Op-Ed: Now Is the Time for Christians to Be Stirred, Not Shaken
Op-Ed: Most Christians Are Willing to Do Something Big for God, But How Many Will Do This?
See more...
Advertisement

After threats against the FBI following its raid on Mar-a-Lago, the Biden admin is asking law enforcement officials to monitor social media.
By Grant Atkinson  August 15, 2022

Officer in George Floyd Killing Rejects Plea Deal, Says He Would Be 'Lying' to Accept Any Offer

Two Minneapolis police officers have rejected plea deals in connection with the death of George Floyd, setting the stage for a trial.
By The Associated Press  August 15, 2022

Pelosi's Pacific trip did nothing tangible for Taiwan, but some of its ramifications could mean very tangible harm in the US.
By C. Douglas Golden  August 15, 2022
Next