Investigators Say This Man Had Violent Reaction After Being Asked to Pull Up at a Wendy's Drive-Thru, Murdered Employee in Cold Blood

You know the media spiel: Our response to coronavirus has been among the worst in the world.

Just look at The New York Times on April 11: “He Could Have Seen What Was Coming: Behind Trump’s Failure on the Virus.” Or look at it on April 13: “Trump’s Slow Response to the Coronavirus Pandemic.” On April 14: “Criticized for Pandemic Response, Trump Tries Shifting Blame to the W.H.O.”

This is a pretty steady drumbeat, both in news coverage and opinion pieces. (I have trouble telling them apart when it comes to The Times, though, and I think their editors do, too.) The basic gist of it is this: The Trump administration caught the virus late, has mismanaged the response since and has tried to divert America’s attention elsewhere.

According to John R. Lott Jr., the noted conservative economist and political commentator, that’s entirely wrong. In a situation where no one knows precisely how to manage a pandemic, he says, the United States’ response has actually been world-class.

In a piece published Wednesday at Townhall, Lott argued that media outlets were misreading statistics, and not just in terms of neglecting to put things in per capita terms.

Trending:
Investigators Say This Man Had Violent Reaction After Being Asked to Pull Up at a Wendy's Drive-Thru, Murdered Employee in Cold Blood

“Many use the number of deaths as a measure of how the U.S. is faring relative to other countries, but that is extremely misleading. It would be the same comparing the number of rapes in Sweden and the United States,” Lott wrote.

“It makes no more sense to compare the number of Wuhan coronavirus deaths in the U.S. versus other countries than it does to compare rape rates. But looking at the death rate also isn’t perfect,” he continued.

In addition to that, Lott stated that because coronavirus was almost certainly introduced into different countries at different times, useful comparisons are difficult.

“The length of time of exposure to the virus also matters, and different countries faced exposure at different times. A country that has had been the chance to expose people over months is going to have a lot more potential deaths than a country where exposure has just taken place over a few days.”

For instance, take Germany. Even The New York Times ran an article which praised the job that Germany was doing: “A German Exception? Why the Country’s Coronavirus Death Rate Is Low.”

The United States also compares relatively well with other highly developed countries when it comes to coronavirus deaths.

“When we adjust for population, it is clear that the U.S. has fared very well at each date after the first death compared to Western Europe. Belgium, Germany, Italy, the Netherlands, Norway, Spain, Sweden, Switzerland, and the United Kingdom all have higher coronavirus death rates than the U.S.,” Lott said of what happens when you look at the data from the time of the first death.

Related:
WHO Creating New UN-Style Super-Government? Could Take Control, in Some Cases 'Wherever Necessary'

“The only country that isn’t clear for is France, and that is because a Chinese tourist who was visiting France died 11 days before anyone else in the country died from the virus. If you include the Chinese tourist in the death count, the 11 days without any additional deaths makes the spread of the virus deaths in France look a little slower than those in the U.S. But if we exclude that one case, the U.S. looks much better in slowing the spread of the disease.”

While Lott didn’t mention it in the article, it’s also worth noting that even if you don’t count from the time of the first coronavirus death, we look pretty good.

This is the coronavirus per capita death rate as of Wednesday: 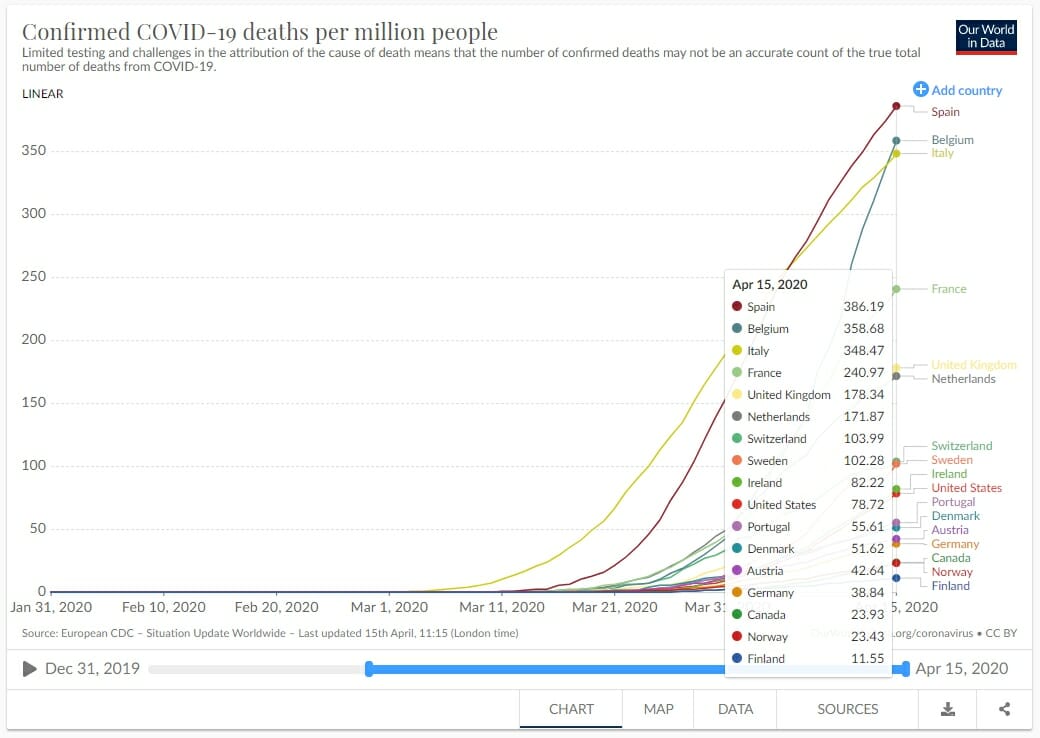 If you pull New York City’s deaths out of this — which accounted for 46 percent of our deaths as of Wednesday — the U.S. ends up in the bottom octile.

And, as Lott noted, the majority of these deaths had to do with pre-existing conditions.

“Governments’ coronavirus response policies won’t explain all of the differences across countries. Some countries are simply healthier than others. The vast majority of coronavirus deaths are associated with pre-existing conditions, such as obesity, diabetes, high blood pressure, and heart or lung disease,” Lott wrote.

“Those rates vary a lot across countries. Americans are more likely to be obese and have diabetes, but are somewhat less likely to have high blood pressure. The quality of the existing medical system also matters a lot, and the U.S. system has few equals.

“The media is spending so much time these days is trying to pin blame on someone for the coronavirus deaths. A lot of people have died, it’s true. But we don’t have to be so hard on ourselves. For many reasons, the U.S. is faring substantially better than Western European nations.”

And that’s some good news we can take away during an exceptionally gloomy period in this nation’s life.

Of course, it’s not enough simply to be doing better than Western Europe. We have to be combating this effectively, not more effectively than nations with an ineffective response.

However, we’re not bungling things. There have been hurdles we’ve missed, absolutely, given that no nation in the world was truly prepared for this.

That said, our numbers aren’t as bad as they’re made out to be. The establishment media may say otherwise, but we’re doing all right and we’re going to be all right.

That’s a message we all need to hear.

There is much less food, specifically wheat, in stockpiles than governments are saying, according to one expert.
By Jack Davis  May 22, 2022

A massive peanut butter recall is taking place due to fears of contamination; here is how to tell if you need to throw away your jar.
By Jack Davis  May 22, 2022

The family of a Black Lives Matter protestor who was killed in an armed standoff is suing the Army sergeant who shot him.
By Richard Moorhead  May 22, 2022

Investigators Say This Man Had Violent Reaction After Being Asked to Pull Up at a Wendy's Drive-Thru, Murdered Employee in Cold Blood

This senseless murder is yet another example of how normalized hair-trigger violence has become in America today.
By Samantha Chang  May 22, 2022

The US Marshals are seeking a suspect in the homicide of professional cyclist Moriah Wilson. They've investigating a love triangle.
By Richard Moorhead  May 22, 2022

As it turns out, COVID-19 tests can turn deadly if used incorrectly. One UK woman found out as much with her own at-home test.
By Shelby Johnson  May 22, 2022

Big names including Pete Davidson and Kate McKinnon are leaving 'Saturday Night Live' as its 47th season ends.
By Andrew Jose  May 22, 2022

Trump lashed out after learning that Hillary Clinton approved the spread of allegations linking the 2016 Trump campaign to a Russian bank.
By Jack Davis  May 21, 2022

Maher said that over 20 percent of Generation Z Americans identify as LGBT, up from the 2.6 percent of Baby Boomers who identify as such.
By Richard Moorhead  May 21, 2022

Despite the serious nature of the charges against Williams, the city Law Department claims the young performer 'cannot be prosecuted.'
By Jared Harris  May 21, 2022
Next