In the collective nightmare of timeline 2020 we’re living in (I’m assuming that has to be it, because I’ve been going to work in my pajamas since March and no one’s laughed at me yet), the recent prominence of the satire site The Babylon Bee — and the fact it’s actually being fact-checked by mainstream news media — shouldn’t come as a surprise.

Yes, The Bee, as it’s affectionately known, isn’t just the conservative version of the satirical website The Onion, which it’s so often portrayed as. It’s also an explicitly Christian site, which is unusual when you consider its sense of humor. It’s not just that we Christians aren’t supposed to be funny, it’s that some of the Bee’s jokes are going to go over the heads of nonbelievers.

So why is USA Today fact-checking it?

There’s no shortage of satire and “satire” websites out there for the newspaper to check upon — not to mention actual fake news. That should be enough to keep them busy, but then there was this: 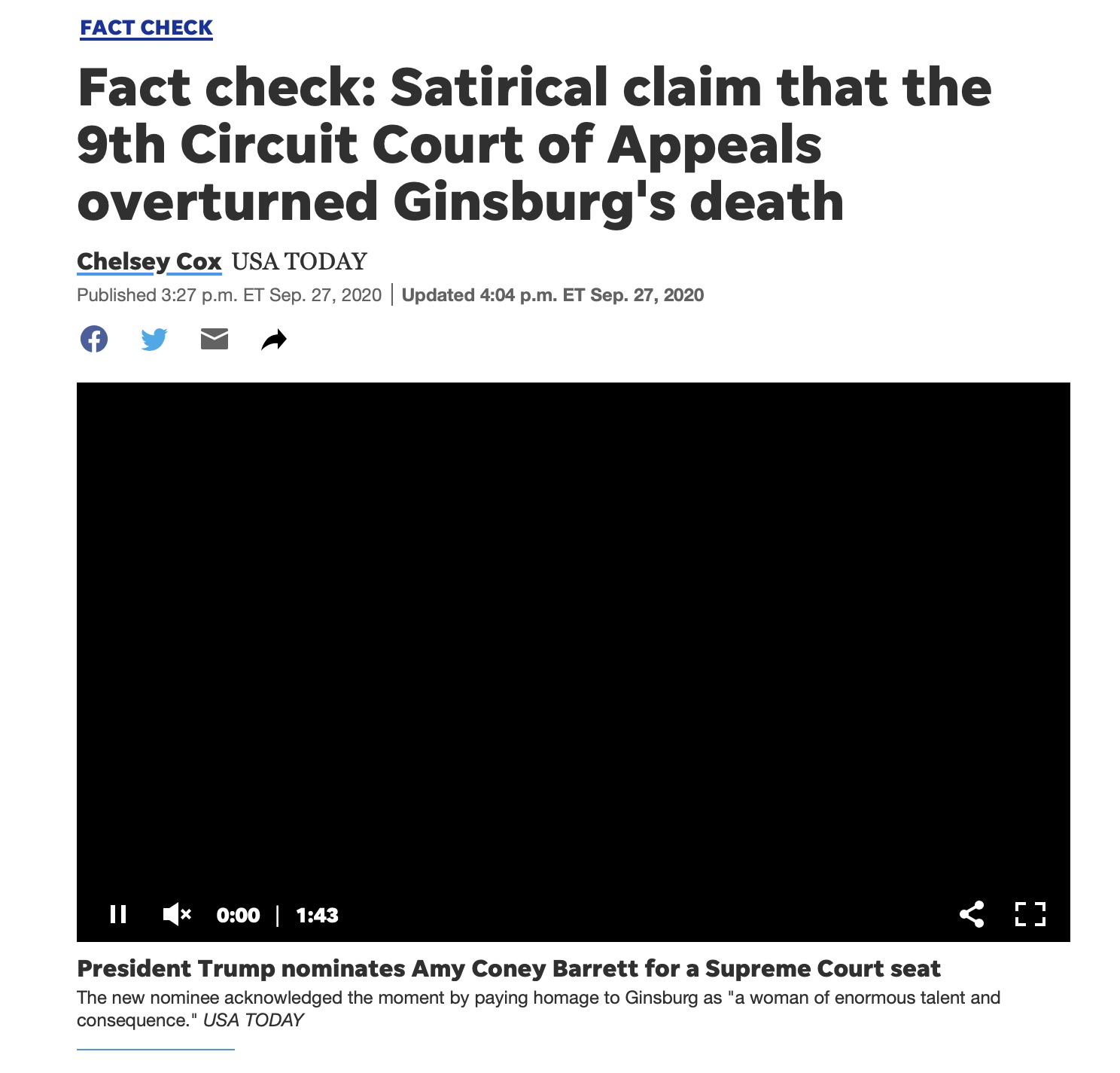 The newspaper decided to fact-check a clearly satirical article in The Bee about the death of Supreme Court Justice Bader Ginsburg (and its aftermath), titling it, “Ninth Circuit Court Overturns Death Of Ruth Bader Ginsburg.”

The 9th Circuit Court of Appeals, for those of us who aren’t judicial nerds, is a notoriously liberal corner of the appellate court system, one which repeatedly struck down the Trump administration’s travel ban, among other things.

Just so we’re clear, here’s how Merriam-Webster defines a word that’s going to be crucial for our purposes:

“Satirical (adj.): marked by the use of wit that is intended to cause hurt feelings.”

I mention that because the wordsmiths over at USA Today, in an appallingly po-faced manner, published a piece about the Babylon Bee’s take Sunday.

USA Today began by examining “the claim” that, as the Bee put it, “The 9th Circuit Court of Appeals overturned the death of Supreme Court Justice Ruth Bader Ginsburg”

“In a close decision, the judges on the court have ruled RBG’s death unconstitutional and will block Trump from nominating a replacement,” the Bee’s article read.

This is prima facie funny, but apparently USA Today might have thought some people were taking this seriously

“Ninth Circuit Judge Kim McLane Wardlaw was credited with issuing the ruling on the basis that Ginsburg’s death was an ‘affront to the (Constitution)’ and the ‘God-given right to abort as many babies as possible and sell their body parts for research,'” USA Today’s piece stated.

The Babylon Bee article concluded by quoting Wardlow saying the 9th Circuit is exploring means of bringing Ginsburg back to life: “Judge Wardlaw followed up on her ruling, saying: ‘We hereby rule any attempt by President Trump to appoint a replacement to be unconstitutional. We will block any attempt until we figure out a way to resurrect her or maybe clone her and restore her to her already ‘legally alive’ state. We’re still figuring that part out.'”

Yes, I would imagine. USA Today wants you to know that a) Judge Kim McLane Wardlaw is indeed on the 9th Circuit Court of Appeals and b) hasn’t said she’s doing anything of the sort.

“Wardlaw’s most recent opinion was on Catherine Torres v. [Attorney General] William Barr on Sept. 24,” USA Today wrote. (They didn’t mention whether that case involved the reanimation of corpses, however.)

“There is no record of any Wardlaw opinion on Ginsburg’s death on the website for the 9th Circuit, but she participated in a panel discussion Friday about Ginsburg’s life produced by the UCLA School of Law. There was no mention of ‘reviving’ Ginsburg during the discussion.”

To the surprise of absolutely no one, USA Today deemed the claim “satire,” which is pretty amazing when you consider that’s actually what the site bills itself as.

“A satirical article about the 9th Circuit ‘overturning’ Supreme Court Justice Ruth Bader Ginsburg’s death has no basis in fact,” USA Today wrote. “It is true that the 9th Circuit has ruled against many Trump-era policies.”

While it might be a relief that the journalists at USA Today recognize satire when they see it (after some “research,” of course), the problem with this fact-check goes beyond the fact that there simply is a check for an article so patently absurd. It’s another example of how insidious the mainstream media bias against conservatives, and Christian media outlets, actually is.

The Onion is well protected, by virtue of being well-known and popular among liberals. The Babylon Bee, meanwhile, is less well known and decidedly not popular among liberals. The Bee has even been fact-checked by the liberals at Snopes.com and threatened by Facebook over a story that humorously mocked CNN by “reporting” the network puts its news through a washing machine’s spin cycle.

The harassment is no accident. The website’s politics are decidedly conservative — and openly so. Its satirical articles are funny, but at the same time supportive of President Donald Trump, and mocking toward his political opponents. The 9th Circuit, of course, has a notorious reputation for liberal rulings (though Trump’s presidency could be changing that).

Fact-checking, as it has evolved in a media environment dominated by mainstream giants with a profound bias against the Trump administration, isn’t really about checking facts in most cases.

In the mainstream media, of which USA Today is very much a part, it’s about scoring points against the president and those who support him in public, like The Babylon Bee.

There’s nothing particularly funny about that.

Note: Since the Bee and USA Today articles were published, new developments in the matter have come to light; according to unnamed sources who actually don’t exist, the 9th Circuit Court of Appeals has engaged the services of an expert in the field of reanimation, Dr. Frederick Frankenstein. (Pronounced Fronk-en-STEEN.) Results will potentially be forthcoming before Amy Coney Barrett appears before the Senate Judiciary Committee. Further bulletins as events warrant.

Absolutely none of this is true, of course, but I’m hoping for a USA Today fact-check. Nearest I can tell, getting one is pretty easy — and just imagine the attention!