On Feb. 21, I had the incredible opportunity to attend The Black History Month Reception at the White House. It was an experience I will never forget.

As a proud American and a proud member of the black community, I was extremely grateful to be honoring Black History Month with our president. And the best part was, I was not alone. Every single person in the room was celebrating our pride as Americans, as well as the accomplishments made by the Trump administration. Together, we shared our love for our communities and our country.

While at the White House, I met people from all walks of life. I met people who served in the military and people who served in the penitentiary. I met college athletes, Rhodes scholars, pastors, single mothers, activists and politicians. I met folks who are actively fighting for civil rights and for the opportunities of black Americans, whether it be on the streets, in elected office or through social media.

Although the left will often try to dismiss events centered around the black conservative movement as only being a photo opportunity, this event was so much more than that. It encouraged attendees with a sense of community and fellowship.

In this movement, it is so important to know that you are not alone — that you are not the only one who is tired of being shamed for your beliefs, and that you have brothers and sisters across the country ready to stand up and fight alongside you.

It was an extraordinary experience to be surrounded by these people as President Trump addressed us all with a tremendous speech. He spoke about black history in a way that was empathetic and encouraging.

Instead of wasting time focusing on the dreadfulness of the past, he spoke about the optimistic realities of our future. While doing so, he recognized a few very important people who were on the stage with him. The person who stood out to me the most was Catherine Toney.

Toney’s story made me tear up. She was the first female released as a result of First Step Act, which was signed into law by Trump. The First Step Act gives non-violent offenders the opportunity to reenter society as law-abiding citizens and productive members of society.

It does this by reducing mandated sentences and allowing inmates the opportunity to reduce their personal sentences by obtaining credits for good behavior and participation in vocational and rehabilitation programs. While many people never get a second chance at a free life, Toney did. It was clear from her speech, and her gratefulness toward the president, that she will not be taking it for granted.

These achievements are not owed to Trump alone but are also a reflection of the great people he has surrounded himself with. Senior advisor to the president, Jared Kushner, was a true leader when it came to getting the First Step Act passed. Kushner’s dedication, as well as his willingness to reach across the aisle, is what made this bill possible.

These efforts brought in influential people like Kim Kardashian, Van Jones and bipartisan members of Congress to have productive conversations regarding prison reform. The black community should not ignore the vital role Kushner played.

This event was only a part of Trump’s overall effort to keep black conservatives active in his administration, and to listen to our concerns about the issues facing our communities. The Urban Revitalization Coalition, which is aimed at restoring impoverished areas, and the White House Initiative to Promote Excellence at Historically Black Colleges and Universities have also been tremendous steps in the right direction.

Trump has been a genuine supporter and consistent contributor to black success, and that is why we support him. Coming home after this event, I am fully confident this is only the beginning. 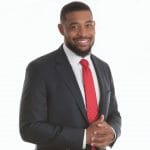 Tatum got his start as an All-American high school football player in Fort Worth, Texas. He was featured in the U.S.-Army All-American Game, which showcases the top 78 high school football players in the nation. Tatum accepted a full athletic scholarship from the University of Arizona in 2005. He played at Arizona for 5 years and entered the NFL Draft in 2010. God had other plans, and he joined the Tucson Police Department a year later.

Tatum served 6 years with the Tucson Police Department. During his tenure, he became a SWAT operator, field training officer, general instructor and a public information officer.

In late 2016, Tatum became popular from his viral videos, which dealt with social issues, politics and law enforcement. A short time later, Tatum left law enforcement and followed his passion to speak the truth full time.

Tatum holds a bachelor's degree from the University of Arizona in sociology and is actively working on his master’s in business leadership from Grand Canyon University. He now serves as the Director for Urban Development for Turning Point USA.

At the White House Black History Month Event, I Saw Trump Embrace the Past but Focus on the Future
See more...
Advertisement