Hakeem Jefferson is an assistant professor of political science at Stanford University, one of America’s premier institutions of higher learning.

“Race is the central organizing feature of American politics,” Jefferson says on his Twitter bio. “Nothing else comes close.”

He’s a also prolific tweeter, having racked up over 24,000 posts on his account (and even more followers).

Jefferson clearly isn’t shy about getting attention. But some of his Twitters posts drew a kind of attention he didn’t appreciate when he decided to blame opposition to mask mandates on a trait he calls “whiteness.”

The tweets were first reported on by Campus Reform on Thursday.

“Make no mistake, this crazy opposition to mask wearing that is leading folks (read White ppl) to act violently at school board meetings & council meetings & everywhere else — yeah, you can’t disconnect it from whiteness,” Jefferson tweeted Aug. 17. “And discussions that don’t acknowledge this are incomplete.” 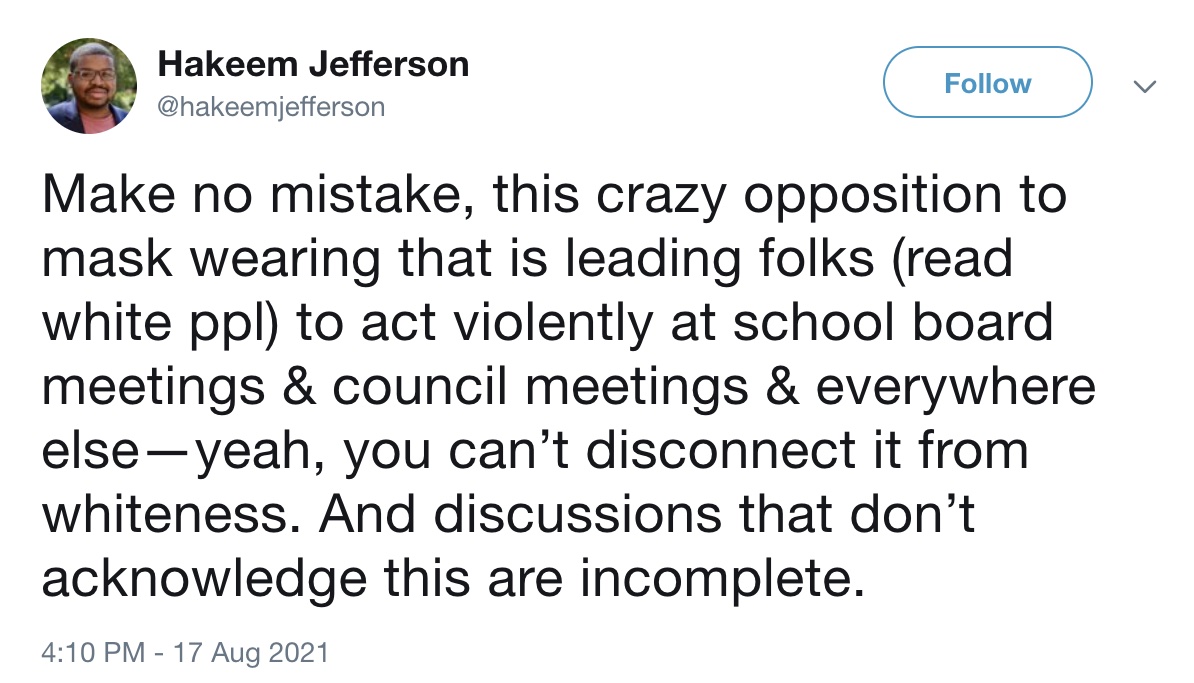 Jefferson went on to tweet that opposition to classroom mask mandates also has to do with white people believing they’re above the law.

“Ain’t like masks are comfortable for non-White people. But you don’t see a bunch of Black folks storming meetings,” Jefferson wrote.

“And it’s not just cause these White folks are GOP. It’s cause they’re White, & believe whiteness confers upon them a kind of power that places them above gov action.” 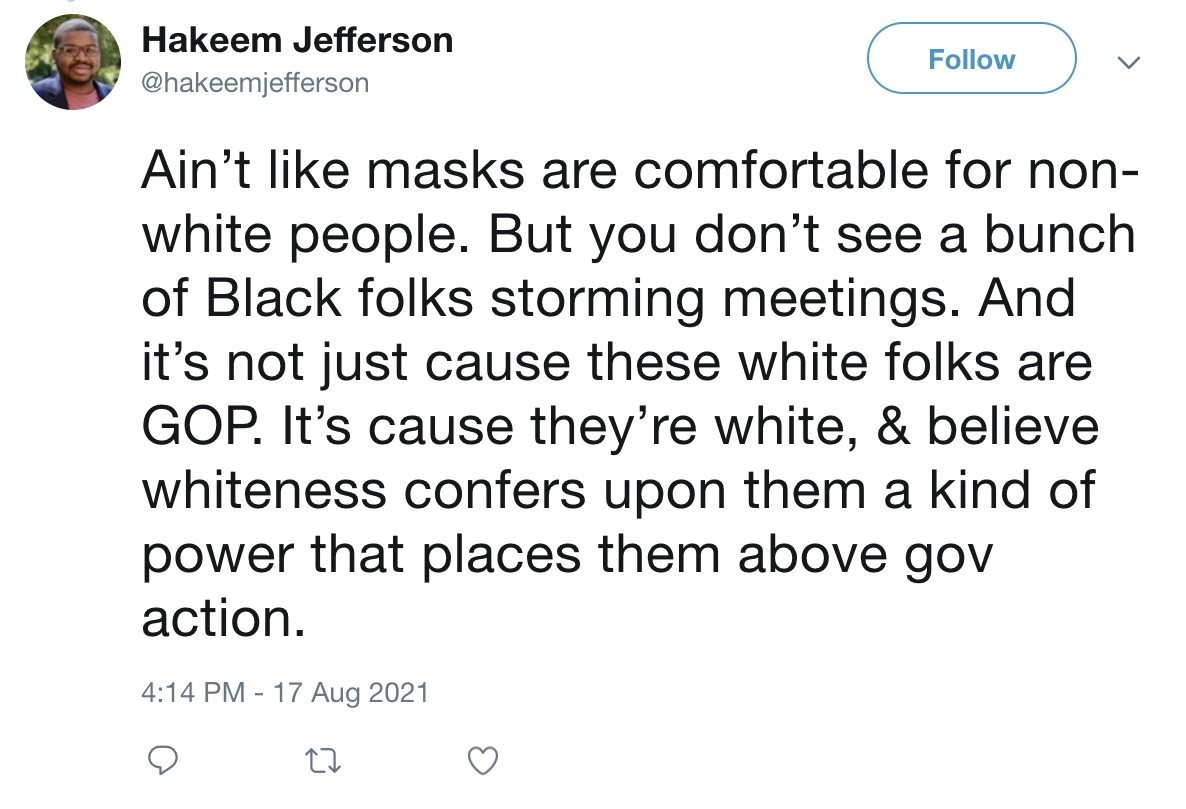 He also compared opposition to school mask mandates to the Jan. Capitol incursion, because — well, “whiteness be working overtime.”

“It’s like my reaction to jan6. You don’t have to be an expert in identity to know that whiteness is driving the behavior,” Jefferson tweeted.

“The crowds are overwhelming white. You think this just randomly happened? Nah, whiteness be working overtime. Like we say in the south, the devil is busy!” 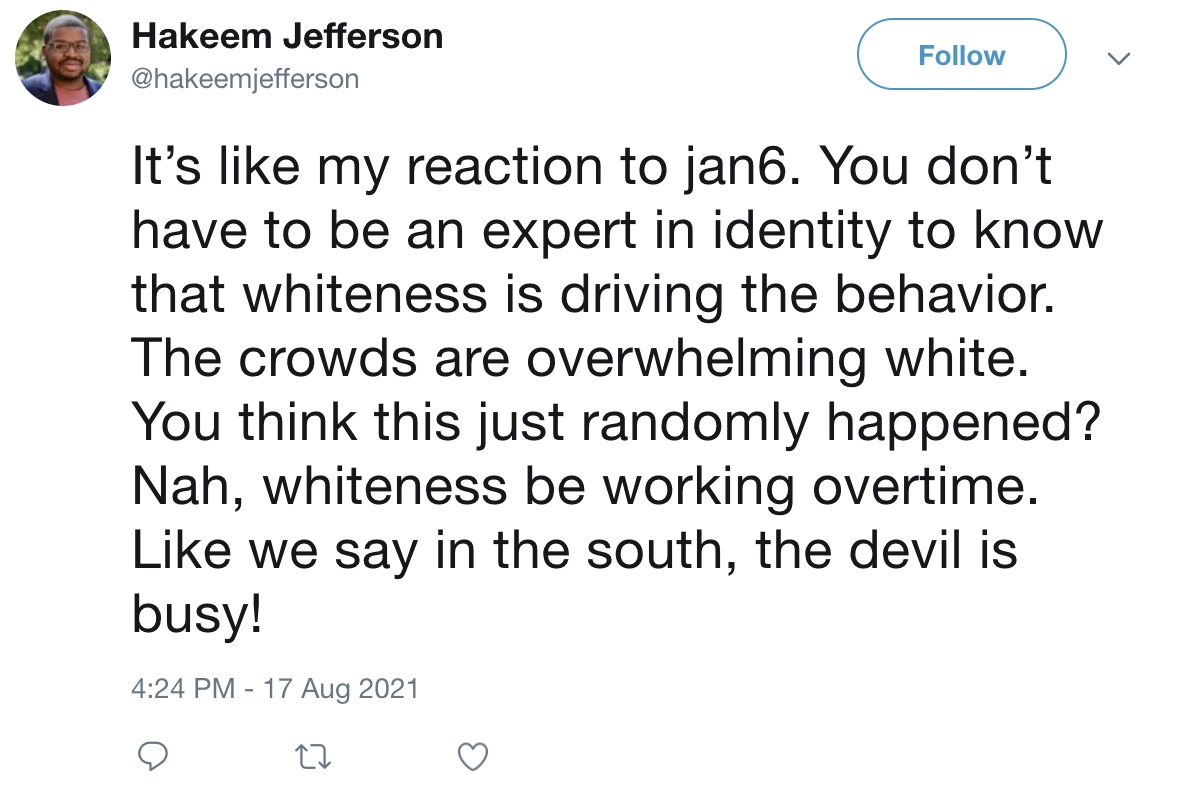 There’s some irony here in that the first report on Jeffries’ tweets came from a reporter at Campus Reform, Corey Walker, who — if one is to judge by his profile picture — is black.

So maybe skin color isn’t an infallible predictor of thought and behavior after all?

Liberal racists needn’t fret — Jeffries’ had a preemptive answer to this kind of question in another tweet on Aug. 20, where Adam Serwer, a writer for The Atlantic, posited that “race is a malleable fiction that is constantly shifting with the politics of the time.”

“Reminds me of a v good question I got yesterday from a Stanford student asking me to help answer a q he’s had come up. How can one argue, as I do, that whiteness was at the root of 1/6 given there were Vietnamese flags and other ‘non-white’ groups represented?” he wrote.

Jeffries posted a reply which argued that whiteness is “a construct” that’s “not merely about skin color, although those think of themselves as white are most susceptible to its attractions.”

“There have been, throughout the course of American history, people who don’t fit neatly into the category we consider white who have locked arms with those who do who are committed to the ideology of whiteness,” he continued.

“That fact does not undermine the argument that whiteness is a helluva drug that explains events like the jan 6 insurrection. To the contrary, it reminds us of how f’ing powerful whiteness is. It’s so powerful, it is attractive to those it so often oppresses.” 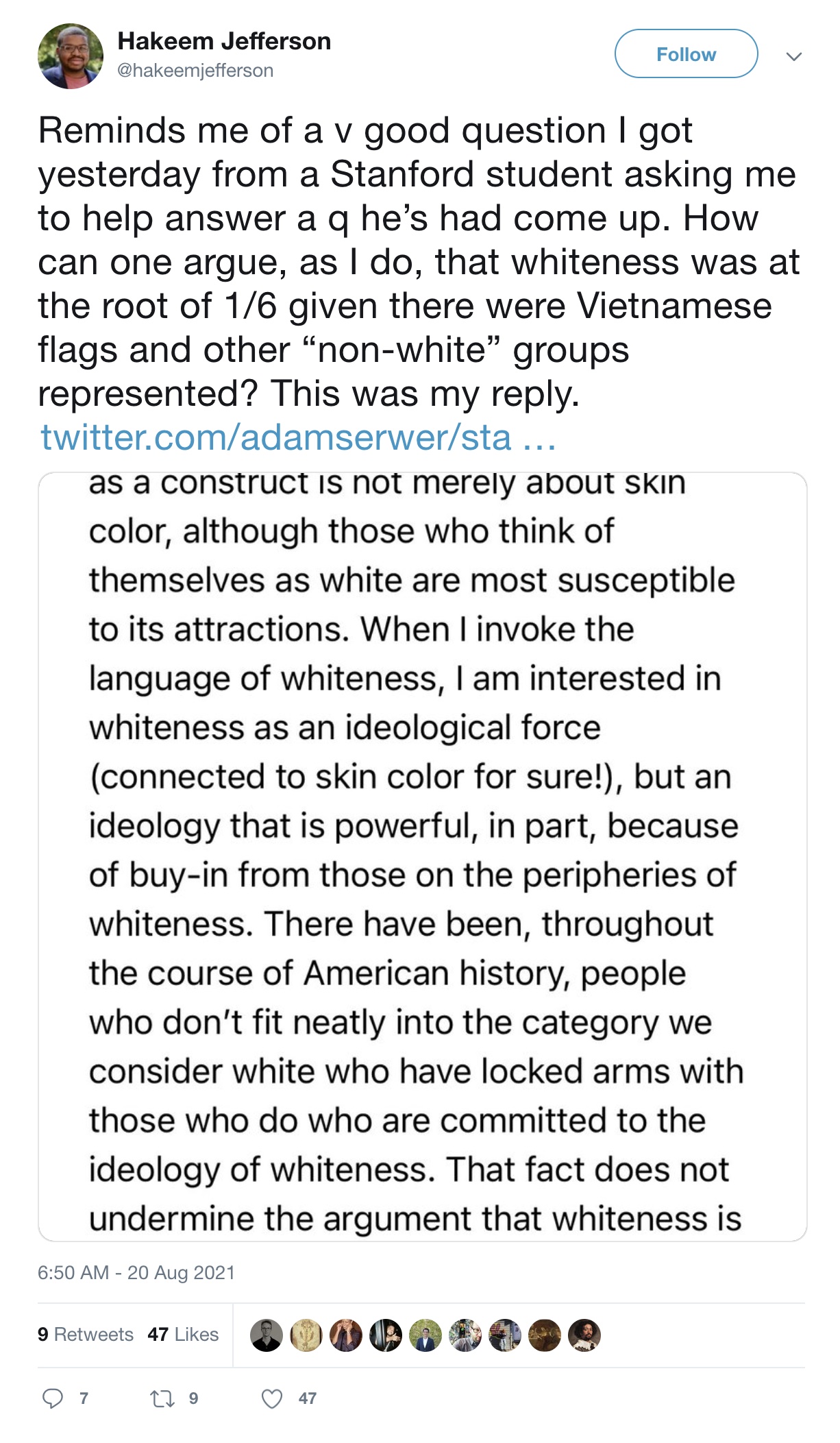 He had a different sort of answer when contacted by Walker, launching into another Twitter thread in which he accused the writer of “wilding.”

“A reporter from Campus Reform reached out to ask if I have any comments on this tweet because they’re writing a story about my comments. I think the tweets speak for themselves. Wait until they hear how I teach about race and injustice in the classroom!” he wrote.

“It turns out, they have also reached out to the university for comment about my tweets, as if I would ever be at a university that even thought it could control the things I say. What a joke. Free speech for me, but not for thee, I guess,” he continued, adding, “These people are wilding.” 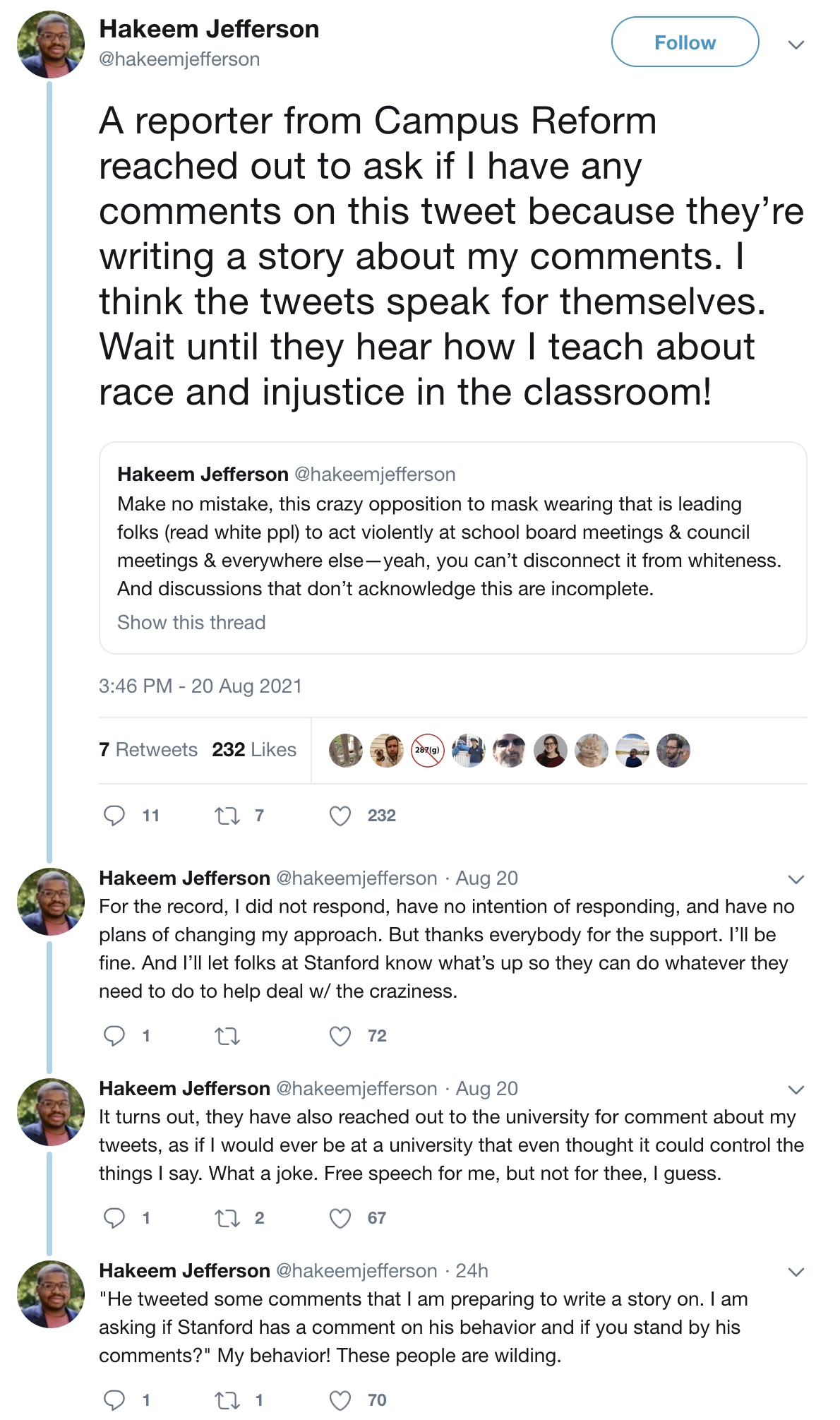 Jefferson misses the point when he pegs this as a free speech issue — “as if I would ever be at a university that even thought it could control the things I say.” Jefferson doesn’t have to worry about this. His opinions are the kind academia embraces.

On his university profile, Jefferson notes that his dissertation, “Policing Norms: Punishment and the Politics of Respectability Among Black Americans,” was co-winner of the 2020 Best Dissertation Award from the Political Psychology Section of the American Political Science Association.

Rather, the speech issue is on the other side — with students who might disagree with Jefferson’s assertion that “whiteness” is behind everything that progressives dislike in 2021 America. Parents who rebel against school mask mandates, those who think there was something wrong with the 2020 election, non-whites who do and think things Jefferson doesn’t approve of: All “whiteness!”

On his personal website, he writes that he’s “keenly aware of the history of racism and racial violence that are core features of the American project.” His research focuses on “a careful theoretical framework and novel measure of respectability that help make sense of Black Americans’ support for tough-on-crime laws and punitive social welfare policies.” (Which probably includes “whiteness,” too.)

When questioned out on these beliefs, his response is that the reporter who did it is “wilding.”

Imagine, then, if you’re one of his students. Like so many other conservatives on college campuses, your free speech is probably seriously qualified — since it’s clear that Jefferson thinks that kind of “free speech” smacks highly of “whiteness.”

So, be a good student, wear your mask and nod along. And when you talk about why you’re wearing masks, make sure to mention that opposition to mask mandates is inseparable from “whiteness.” As Prof. Jefferson says, any discussion that doesn’t acknowledge this is incomplete.

You wouldn’t want to be incomplete, would you?