Vulgar pro-abortion actress Alyssa Milano took to Twitter this week to yet again blast the president.

Seriously, what else does this woman do with her life?

On Monday, the gun-owning feminist complained that she can’t let her 8-year-old son watch President Donald Trump on the news because he is “inappropriate” and “unpresidential.” 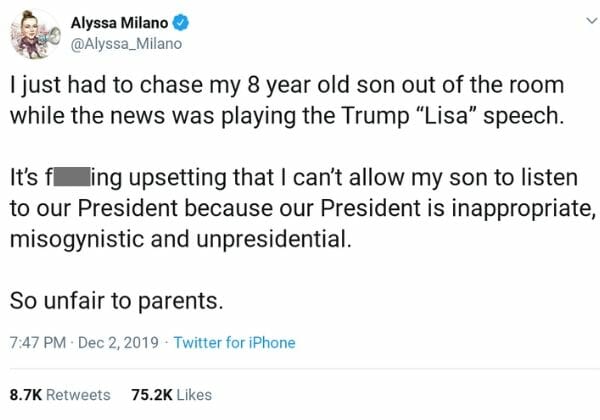 Milano was likely referencing comments Trump made at a rally in October where he imitated an exchange between former FBI attorney Lisa Page and former FBI agent Peter Strzok, who engaged in an adulterous affair and texted each other about their mutual disdain for the president.

Do you think President Trump's comments were “inappropriate” and “unpresidential"?
Yes: 6% (104 Votes)
No: 94% (1767 Votes)
Advertisement - story continues below

“Lisa, oh God, I love you, Lisa,” the president howled to his highly entertained Minnesota audience. “And if [Hillary Clinton, Trump’s Democratic opponent in 2016] doesn’t win, we’ve got an insurance policy, Lisa. We’ll get that son of a b—- out …”

Page is in the news this week for having granted an interview to “The Daily Beast” on Sunday in which she painted herself as the victim.

When Lisa Page, the lover of Peter Strzok, talks about being “crushed”, and how innocent she is, ask her to read Peter’s “Insurance Policy” text, to her, just in case Hillary loses. Also, why were the lovers text messages scrubbed after he left Mueller. Where are they Lisa?

It’s pretty rich to see Milano get all worked up over the president’s remarks, as she herself has made plenty of crude comments on social media in recent years (see below).

This is really just another classic case of liberal hypocrisy, and Twitter users were quick to point that out.

Related:
Breaking: Roseanne Back on Air with New TV Gig

“Wait until your son sees some of your movies,” another said.

“Does your eight year old stay in the room when his Mom types ‘f—ing’ in a tweet?” commented another.

One Twitter user mentioned Hollywood’s unrelenting hatred of the president.

Its upsetting that I can’t allow myself or my grandkids to watch award shows without hearing celebrities talk smack or go off on a curse word tirade about our president or his supporters!

In 2012, Milano tweeted that she had “crazy amounts of love” for the 42nd president.

The tweet has since been deleted, likely because Juanita Broaddrick — who accuses Clinton of raping her in 1978 — drew attention to it.

During Supreme Court Justice Brett Kavanaugh’s confirmation hearings, Milano changed her tune about Clinton, telling CNN that “we probably should’ve investigated the allegations against him as well.”

Milano herself has used crass language on numerous occasions.

“You tear-gassed women and children, a–wipe! And on Thanksgiving weekend, you piece of s—, a–hole, motherf—ing, evil-creature-person!!” she tweeted to Trump on Nov. 25, 2018.

Apparently, Milano thinks this is an “appropriate” way to talk but when Trump says something less offensive it’s “f—ing upsetting” and “unfair to parents.”

Are Americans sickened by armed raids on the homes of the administration's political opponents? November's vote will tell.
By Joe Saunders  September 27, 2022

'When you have that kind of rhetoric floating around out there, we’ve seen in history that is dangerous rhetoric,' the former president said.
By Samantha Chang  September 27, 2022