If this is the best her opponents can come up with, Amy Coney Barrett is a lock for the Supreme Court.

Of all the vested interests with an eye on the Barrett confirmation hearings that entered their second day on Tuesday, the abortionists at Planned Parenthood have to be one of the most vigilant, considering their business model is basically built on providing the murderous service leftists are terrified Barrett’s presence on the court would endanger.

An attack on Barrett from that direction isn’t only expected, it’s practically demanded by the knee-jerk politics of progressives at the moment. What wasn’t expected was the astounding ignorance that attack would unveil.

In a Twitter post published Tuesday, Planned Parenthood Action, the political arm of the nation’s largest abortion provider, decided to imply Barrett is some kind of bigot for quoting John Adams, the second president of the United States and one of the most brilliant of the brilliant minds among the Founding Fathers. 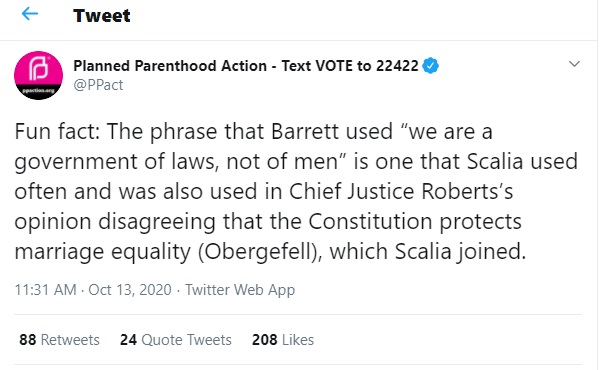 Trending:
Biden's DOJ Is Now Getting Involved with the Arizona Election Audit

“Fun fact: The phrase that Barrett used ‘we are a government of laws, not of men’ is one that Scalia used often and was also used in Chief Justice Roberts’s opinion disagreeing that the Constitution protects marriage equality (Obergefell), which Scalia joined,” the tweet stated.

Yes, well, Barrett did use the phrase in her opening statement to the Senate Judiciary Committee (CNN has the transcript here).

And Chief Justice John Roberts did use it in dissenting in the Obergefell decision — the 2015 ruling that legalized homosexual marriage pretty much on the grounds that then-Justice Anthony Kennedy felt like it (and the court’s liberal wing was behaving with its typical lawlessness).

“Government of laws…” is also one of the most common phrases in American politics. While it was originally coined for the Massachusetts state constitution, according to the Cato Institute, it has applied traditionally to the country as a whole, since it perfectly describes a nation that is dedicated to a society built on laws that apply to all, not the whims of a royal class (or even celebrity elites with huge Twitter followings).

It’s tough to tell which is worse: That Planned Parenthood appeared ignorant of a staple of American political discussions, or that it considered belief in the supremacy of law to be somehow disqualifying in a candidate for the highest court in the land.

Either way, the response on social media had to be pure torture for the liberal sacred cow.

Fun fact: Planned Parenthood doesn’t recognize a fairly common quote from one of the Founding Fathers when they see one. Also, they kill babies for money.

It is attributed to The Deacon’s son from Braintree, Massachusetts in 1780. One of our best VP’s (and most impactful founders) without whom we would still have a Queen, Idiots.

It must be exhausting the non stop looking for thing to be offended by instead of, oh I don’t know…. living life. Oh sorry planned parenthood, really poor choice of words on my part

It’s also — and this should be important even to the infanticidal mob at Planned Parenthood — such an apt description of the nation the United States is intended to be that it’s frequently used by politicians of both parties.

This is a quote from John Adams, our nation’s second president.

President Obama quoted it in 2009.

So you will no longer endorse Joe Biden? pic.twitter.com/rkguSrY6Jp

One of the more troubling aspects of social media during the Trump years is that just about any idiocy displayed by liberals will find its defenders among the Twitterati, just as literally anything President Donald Trump or a prominent Republican says or does will be subject to scurrilous attacks.

There are plenty of brains behind Planned Parenthood — an organization built so obviously on evil can’t embed its way into American culture without a certain amount of intellectual ability. But as far as ethics and morality goes, it would be tough to name a more bankrupt group.

In that regard, it has a lot in common with the modern Democratic Party, which has spent the Trump years attempting to make a mockery of Adams’ basic formulation of American government, perverting every institution of American life in a relentless attack on the man who happens to occupy the presidency at the moment.

But it collapsed on itself in the “Russia collusion” hoax (and the fallout continues to this day), it failed to stop the Brett Kavanaugh Supreme Court nomination, it disgraced the Congress of the United States with a sham impeachment attempt and now it’s trying to stop an eminently qualified Amy Coney Barrett from a seat on the high court.

But if Democrats can’t do better than this, or any of the other empty attacks they’ve thrown up so far, Barrett is a lock for the court – and this country of laws will be better for it.