A CNN editor and photojournalist tendered his resignation on Thursday after a series of anti-Semitic posts from his Twitter account surfaced.

Mohammed Elshamy came under intense criticism this week after Twitter posts began circulating online in which he referred to Jews as “pigs.”

The 2011 post wasn’t just anti-Semitic; it also appeared to be a celebration of the terrorist group Hamas.

The anti-Semitic tweets didn’t just stop with that one, the Washington Free Beacon reported.

“Despite everything happening now in Egypt. I’m proud of the army generation that liberated us from the zionist pigs @ 6 october 1973 #israel,” Elshamy wrote.

“Only in #Egypt you find the Zionist embassy being a flag-less embassy 🙂 #cairo #israeliembassy #israel,” Elshamy posted on Twitter. 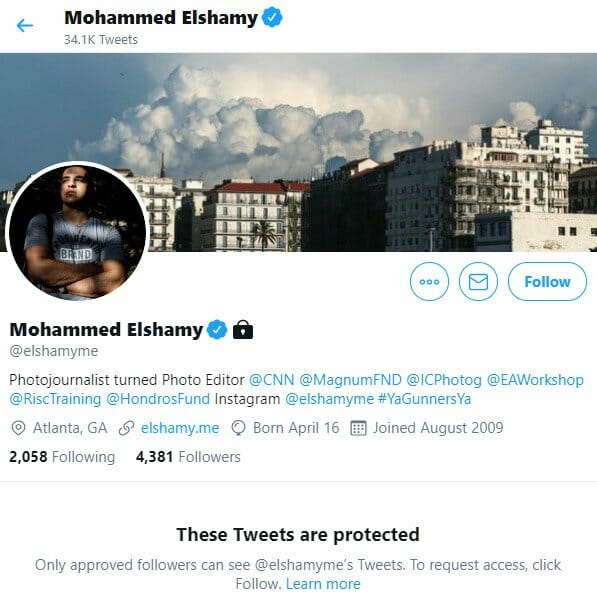 When asked about Elshamy, CNN’s Matt Dornic told The Western Journal, “The network has accepted the resignation of a photo editor, who joined CNN earlier this year, after anti-Semitic statements he’d made in 2011 came to light. CNN is committed to maintaining a workplace in which every employee feels safe, secure and free from discrimination regardless of race, gender, sexual orientation or religion.”

CNN Host Brian Stelter released a similar statement that said, “The network has accepted the resignation of a photo editor, who joined CNN earlier this year, after anti-Semitic statements he’d made in 2011 came to light.”

Just in from @CNNPR: “The network has accepted the resignation of a photo editor, who joined CNN earlier this year, after anti-Semitic statements he’d made in 2011 came to light.” https://t.co/IPHu4b0XKl

CNN came under intense pressure last year when one of its contributors, Mark Lamont Hill, gave a controversial speech in front of the United Nations.

Hill called for a “free Palestine from the river to the sea,” which is often a rallying cry for the anti-Semitic BDS movement.

The former CNN contributor also said that Palestine should use violence when necessary.

“We must prioritize peace, but we must not romanticize or fetishize it,” he said.

UPDATE, July 29, 2019: After this article was published, Mohammed Elshamy made his Twitter account public again and published there a letter of apology for the 2011 tweets, which he said were written when he was 16 and no longer reflect his views: