Morris Sana and Simon Mairowitz hadn’t seen one another for 75 years.

The two cousins grew up together in Romania, sharing childhood memories and years of friendship before Nazi forces invaded, forcing their families to flee across Europe. According to People, the cousins were split up during their evacuation, and after several war-torn years of wondering, they both began to assume the worst.

Each believed that the other had died in a Nazi concentration camp along with the estimated 6 million Jews who were killed during the Holocaust.

In the aftermath of World War II, Sana and Mairowitz built separate lives after relocating to new homes. Sana, now 87, moved to Israel, where he lives with his family. Mairowitz, 85, lives in the United Kingdom.

They never expected to see one another again.

Thanks to the ever-expanding web of connections online, however, the two best friends were given a beautiful reunion. While browsing Facebook, Sana’s daughter discovered some of Mairowitz’s relatives, who informed her that her dad’s cousin was in fact still alive and well. In disbelief, the family immediately started making arrangements for the two to meet up in Tel Aviv, Israel.

Finally, after over seven decades apart, the two childhood best friends embraced for the first time in an emotional moment that was caught on video and shared online by the Holocaust survivors’ relative, Leetal Ofer.

Immediately, the cousins go in for a big hug.

“Good to see you,” Sana can be heard saying.

“Good to see you too after all these years,” Mairowitz answers. “Seventy-five years you waited.”

Overcome, both men break down in tears.

“I imagine you when you were a little boy,” Sana says, remembering as he stares intently at Mairowitz’s face. The memory brings more tears, as he recalls the pre-war years they spent together.

“You remember, don’t you?” Mairowitz, two years younger than Sana, replies. “I can’t remember that.”

RELATED: Famous Faces Who Passed Away in March 2020

Now that they’ve finally found each other, the two relatives are making plans to keep in touch, determined to catch up on all the time they missed.

“We’ve got each other now,'” Mairowitz says, promising, “And we can see each other.”

Ofer shared the emotional clip on Facebook, writing that “this is one of the most moving things I’ve ever seen.” She added that the family’s decision to hold the meeting in Israel made it even more meaningful for all of them.

“The war tore so many families apart and to bring them together in Israel is so magical.” 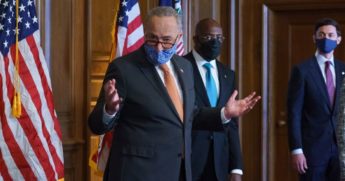