It’s a good day when you can wake up with a strong cup of coffee and a unanimous Supreme Court decision which chastises the Ninth Circuit Court of Appeals for “drastically” deviating from judicial norms.

The cup of coffee is your responsibility, but I can at least point you toward the case: United States vs. Sineneng-Smith.

According to Jurist, the case involved a statute which prohibits encouraging illegal immigration for financial gain.

The facts of the case are pretty simple: As the Supreme Court wrote in summing it up, Evelyn Sineneng-Smith was indicted by a California grand jury in 2010 for encouraging illegal immigrants to apply for “a labor certification program that once provided a path for aliens to adjust to lawful permanent resident status.”

They didn’t qualify for it. She didn’t care.

“To qualify for the labor-certification dispensation she promoted to her clients, an alien had to be in the United States on December 21, 2000, and apply for certification before April 30, 2001,” the Supreme Court ruling noted.

“Sineneng-Smith knew her clients did not meet the application-filing deadline; hence, their applications could not put them on a path to lawful residence. Nevertheless, she charged each client $5,900 to file an application with the Department of Labor and another $900 to file with the U. S. Citizenship and Immigration Services.”

Federal law says that it’s a crime to “encourag[e] or induc[e] an alien to come to, enter, or reside in the United States, knowing or in reckless disregard of the fact that such coming to, entry, or residence is or will be in violation of law.” Her defense was simply that this was she was engaging in free speech when inducing illegal immigrants to apply for a program they didn’t qualify for.

The Ninth Circuit didn’t just buy this when they heard her appeal, they actively sought out three amici — “friends of the court” outside parties, usually experts, who give opinions on the matter at hand — to address questions regarding the overbreadth doctrine, which holds that there can be no law which allows for an overbroad restriction on free speech.

Keep in mind, this wasn’t Sineneng-Smith’s side requesting this. This was all the Ninth Circuit.

They struck down her conviction, finding — and you’ll never believe this — that the law violated the overbreadth doctrine.

Thursday’s 9-0 ruling reversed that decision because the Ninth Circuit invited opinions that weren’t included in the original arguments by the parties in the case.

Instead, the Supreme Court’s ruling stated that “the appeals panel departed so drastically from the principle of party presentation as to constitute an abuse of discretion.

“We therefore vacate the Ninth Circuit’s judgment and remand the case for an adjudication of the appeal attuned to the case shaped by the parties rather than the case designed by the appeals panel.”

Now, that doesn’t decide whether the law infringes upon the overbreadth doctrine, but it’s still a damning opinion. Who wrote that one, I wonder? 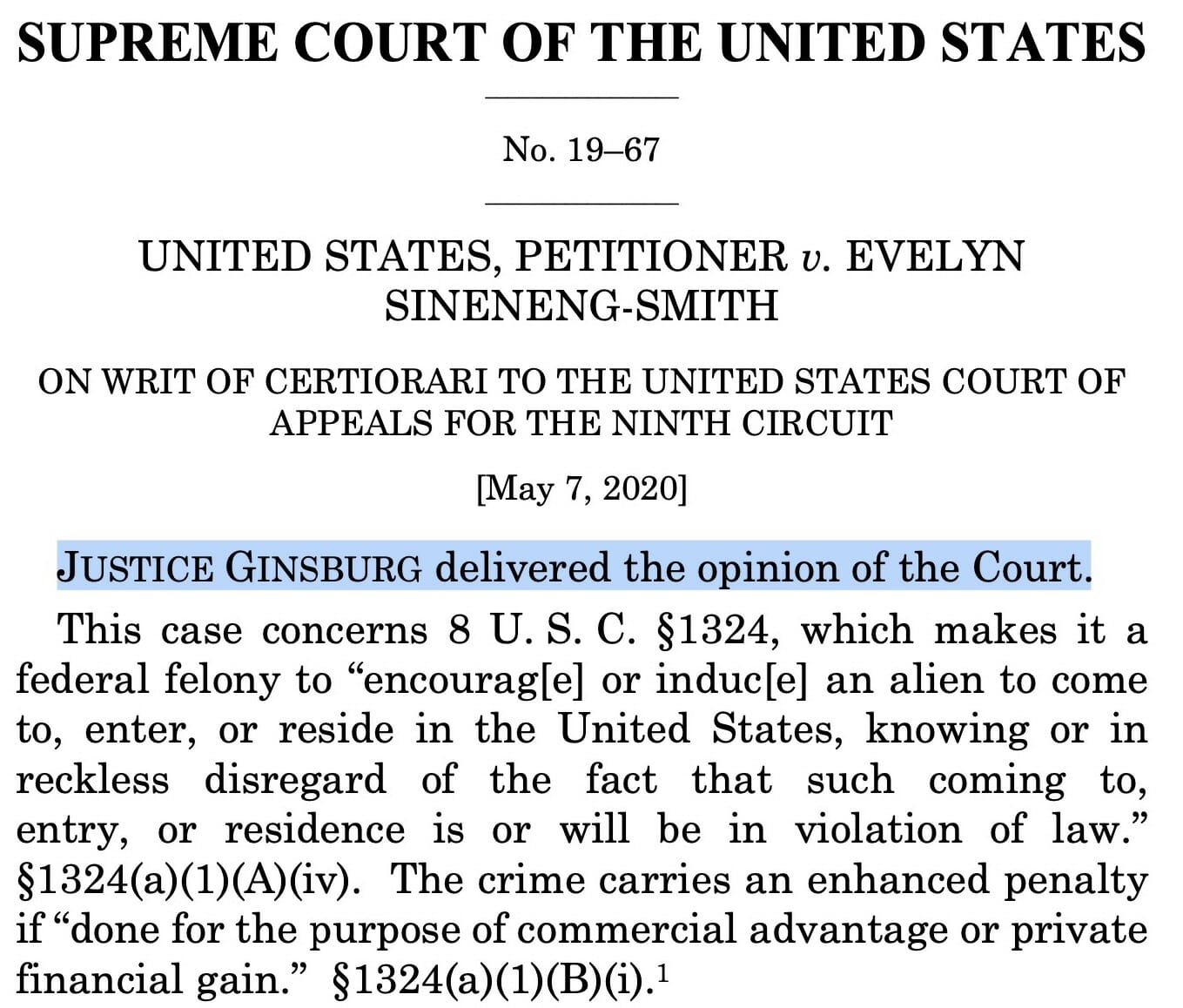 Yes, that’s Justice Ruth Bader Ginsburg going off on the Ninth Circuit. Does this mean you can still wear your “Notorious RBG” T-shirt once you get outside, dear liberal? Probably, because there aren’t too many people who are going to be interested in overbreadth doctrine cases and, let’s face it, she’s still the court’s most liberal member.

“Unfortunately, the Court did not have to reach the issue of whether this important statute is constitutional, but it did keep the law in place. When and if the overbreadth issue is brought up properly by a defendant in the future, we will be there.”

In a separate opinion joined by no one else on the bench, Justice Clarence Thomas challenged the constitutionality of the overbreadth doctrine.

While he had originally believed in it, he said, he felt “that the overbreadth doctrine lacks any basis in the Constitution’s text, violates the usual standard for facial challenges, and contravenes traditional standing principles.” This opinion was joined by no other justices, however, so one can assume it would be an outlier.

Either way, the ruling is a double victory. It strikes down activist judges and — at least for now — ensures that that a law which makes sense can remain on the books (though that could change, considering that the case was remanded back to the Ninth Circuit).

It’s thus a major immigration win — always a good thing for the Trump administration. And it’s wildly hilarious to see Ruth Bader Ginsburg go off on activist judges, which is always an unusual state of affairs.

In terms of the case’s future, I’d like to point out one of the precedents when it comes to the overbreadth doctrine is United States v. Stevens, a 2009 decision in which the Supreme Court established that the standard of whether or not a law could be struck down involves whether “a substantial number of its applications are unconstitutional, judged in relation to the statute’s plainly legitimate sweep.”

I cannot think of any way that there are a “substantial number of … applications” of prosecuting those who “encourag[e] or induc[e] an alien to come to, enter, or reside in the United States, knowing or in reckless disregard of the fact that such coming to, entry, or residence is or will be in violation of law” that would be unconstitutional.

That’s prima facie absurdity. No matter what you feel on the matter, there’s no license to encourage people outside of the United States to break the law, particularly for monetary gain.

You likely won’t see another opinion of this acidity from RBG on the matter,  but you’re equally unlikely to see the law vacated because of the “free speech” rights of someone who earned $3.3 million by telling illegal immigrants they qualified for something they didn’t.