This weekend, presumptive vice president-elect Kamala Harris tweeted out her supposed “solidarity” with small businesses during the COVID-19 pandemic.

“Small businesses, especially Black and minority-owned businesses, urgently need relief to survive the effects of coronavirus this winter. @JoeBiden and I are committed to helping these businesses during this pandemic and get them the support they need to thrive in years to come,” she tweeted.

Small businesses, especially Black and minority-owned businesses, urgently need relief to survive the effects of coronavirus this winter. @JoeBiden and I are committed to helping these businesses during this pandemic and get them the support they need to thrive in years to come.

This is cringe-inducing when one remembers Harris’ twisted efforts this summer to aid the radical Minnesota Freedom Fund to bail out rioters and looters who terrorized these very same businesses. In fact, it was this deceptive “Freedom Fund” that paved the way for a twice-convicted sex offender to be released in July. For juxtaposition, here’s what Harris tweeted in June.

“If you’re able to, chip in now to the @MNFreedomFund to help post bail for those protesting on the ground in Minnesota.”

If you’re able to, chip in now to the @MNFreedomFund to help post bail for those protesting on the ground in Minnesota. https://t.co/t8LXowKIbw

I am both fascinated and disturbed by this mantra that somehow riots that caused the destruction of thousands of companies were “mostly peaceful protests.”

By Aug. 31, it was reported that nearly 1,500 businesses had been “heavily damaged” in Minneapolis and St. Paul. An Aug. 12 NPR headline declared, “Riots That Followed Anti-Racism Protests Come At Great Cost To Black-Owned Businesses.” The Daily Wire noted that the damage in Minnesota would “cost insurance companies up to $2 billion, making [the riots] the most expensive incident in insurance history.”

So, where was the noble Kamala Harris when the small businesses of this nation were being torched by radical antifa scoundrels? Simple. She was just doing what she’s always done.

She was lying to get elected to yet another political office. This time to one of the highest.

In 2010, it was Harris, then the San Francisco district attorney, who was lambasted by a judge for failing to speak out about a negligent police lab technician who was stealing narcotics. Harris intentionally hid information pertaining to the case from prosecutors — resulting in 600 cases being thrown out.

In 2014, Harris took an ardent stance against the release of nonviolent criminals — noting that “prisons would lose an important labor pool,” in the words of the Los Angeles Times.

Evidently, most of these inmates had been arrested for marijuana-related offenses. But since cannabis is the hot issue for the progressive left, it is only fitting that she would have a “commitment to decriminalizing marijuana and expunging the records of people who have been convicted of marijuana offenses.”

This “commitment” would have been beneficial for the thousands of Californians with dime bags who were forced into prison cells because of her policies.

In 2015, Harris opposed efforts to make her office investigate shootings that involved officers. She was also against body cameras being worn. Of course, the presumptive VP-elect has conveniently become an ostentatious Black Lives Matter truther in the past year, or so, highlighting another instance of a swift opportunity to gain popularity with the voters.

During this presidential election, Harris has flip-flopped on numerous issues. Most notably, she changed her stance on fracking. In a 2019 CNN town hall, Harris said, “There’s no question I’m in favor of banning fracking.”

By the time the presidential election came around, Biden and Harris were still speaking out against fracking in speeches across the country. They had been independently for years.

But then it backfired. Because, evidently, this is a profession that employs millions and millions of hardworking Americans. Harris eventually backtracked on that position before the election, saying she and Biden “aligned”- on not banning fracking.

Now we are supposed to believe Harris is “committed” to helping small businesses. If this is the case, it lacks evidence or substance — and contradicts the entire trajectory of her career.

Harris has demonstrated a ridiculous lack of moral fortitude throughout her career, specifically in partaking in the release of the antifa clowns who had good fun ruining people’s small businesses for nights on end.

Consider the facts. Is this a politician committed to anything but her own self-interest? 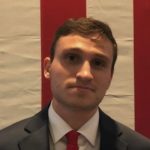 Gabe Kaminsky
Gabe Kaminsky is a writer whose work has appeared in The American Conservative, RealClearPolitics, the Washington Examiner, The Washington Times and elsewhere. He is a student at the University of Pittsburgh and a member of the Pitt College Republicans. He can be reached at gkaminskycontact@gmail.com.
Op-Ed: Kamala Can't Claim To Support Small Businesses After Helping Violent Criminals Back Onto the Street
See more...
Advertisement

A day at the beach turned deadly for a South Carolina woman when she was struck by a flying beach umbrella.
By David Zimmermann  August 12, 2022

'Parents don't know that we have this picture, this video, this trauma, this crime saved,' one former employee said.
By Michael Austin  August 12, 2022

The full search warrant and property receipts from the FBI's raid on Donald Trump's home have been released.
By Michael Austin  August 12, 2022

Actress Anne Heche is reportedly brain dead while her heart is technically still beating, according to a family spokesperson.
By David Zimmermann  August 12, 2022

'They could have had it anytime they wanted without playing politics and breaking into Mar-a-Lago,' Trump said in response.
By Randy DeSoto  August 12, 2022

The Centers for Disease Control and Prevention's announcement represents a major change in how the government deals with the virus.
By Warner Todd Huston  August 12, 2022

“I am proud to have been part of a team that has helped Floridians through historic challenges, and continues to deliver results."
By Randy DeSoto  August 12, 2022

A man who allegedly assaulted a Houston store clerk was pronounced dead after the employee defended himself with a gun.
By Richard Moorhead  August 12, 2022

'They usually leave after we drive them away, but they come back again after we go away,' a Taiwanese coast guard commander said.
By C. Douglas Golden  August 12, 2022
Next