Before we get to Democratic nominee Joe Biden, his very prodigal son Hunter and Twitter’s quixotic quest to suppress information about them, let’s go back to June, when President Donald Trump tweeted out a joke video involving two toddlers — one white, one black — playing and running around, replete with joke CNN chyrons.

One has difficulties imagining the kind of dullard who would be “fooled” by the video — and really, at this point, why even bother reaching out to them? — but the fact-check pietists at Twitter made sure the world knew the president had done something Very Bad™.

“Video being shared of CNN report on toddlers is doctored, journalists confirm,” the June 18 Twitter news page about the clip warned.

“Multiple journalists confirmed that the video, which was shared by President Trump, is edited and features a fake CNN chyron. The original CNN story, which is from 2019, reported on a friendship between two toddlers.”

Yes, “journalists confirm.” Can you imagine the implied insult of being one of the journalists asked by Twitter to confirm this?

“So, yeah, you see, we need someone who can corroborate that this low-rent meme wasn’t actually a video on your network … Oh, you have a masters from Columbia? Huh, didn’t know that … Yes, we know that you’ve been with CNN for a decade and were embedded in Gaza. So anyhow, about this video … Hello? Hello? I think your signal is breaking up. You still there?”

According to NBC News, the video was censored, taken down from both Twitter and the Charybdis to their social media Scylla, Facebook.

I mention all of this because apparently, Twitter is willing to take all possible steps to keep profoundly ignorant people from remaining in their ignorance — at least when it comes to President Trump making a funny.

When it comes to Joe Biden, as we discovered this week, Twitter would just prefer we remain in ignorance.

Beginning on Wednesday, the New York Post began breaking a series of stories based on information discovered on a MacBook that Hunter Biden reportedly took in for service in 2019 and apparently forgot about. The data pointed toward the possibility the erstwhile former Burisma board member and epic flake had tried to peddle influence with clients in Ukraine and China.

Twitter inserted itself into the story because it didn’t want you to read the New York Post’s articles in the first place. If you tried to share them, this happened:

Related:
Austin: If Twitter Bans 'Incitement to Violence,' Why Are They Allowing Praise for Anti-Jewish Terrorism?

It’s not just that Twitter censored the stories, purportedly because they didn’t want to “incentivize” hacking. The social media company also wants to muddy the waters when it comes to the Democratic presidential nominee’s conflict of interest in Ukrainian politics — as Twitter did with another news alert on Wednesday, the same day it started censoring the New York Post’s story regarding Hunter Biden’s alleged influence-peddling in Ukraine.

“A series of emails obtained by the New York Post were published on Wednesday in a story alleging that Hunter Biden, the son of Democratic presidential nominee Joe Biden, introduced his father to a top executive at Ukrainian energy firm Burisma, and that Biden pushed for the firing of a prosecutor investigating Burisma,” the news alert read.

“However, according to The Washington Post, then-Vice President Biden played no role in pressuring Ukraine officials into firing the prosecutor, who also was not investigating the energy firm. It also doesn’t detail whether the elder Biden actually met with Hunter’s Ukrainian business associate.” 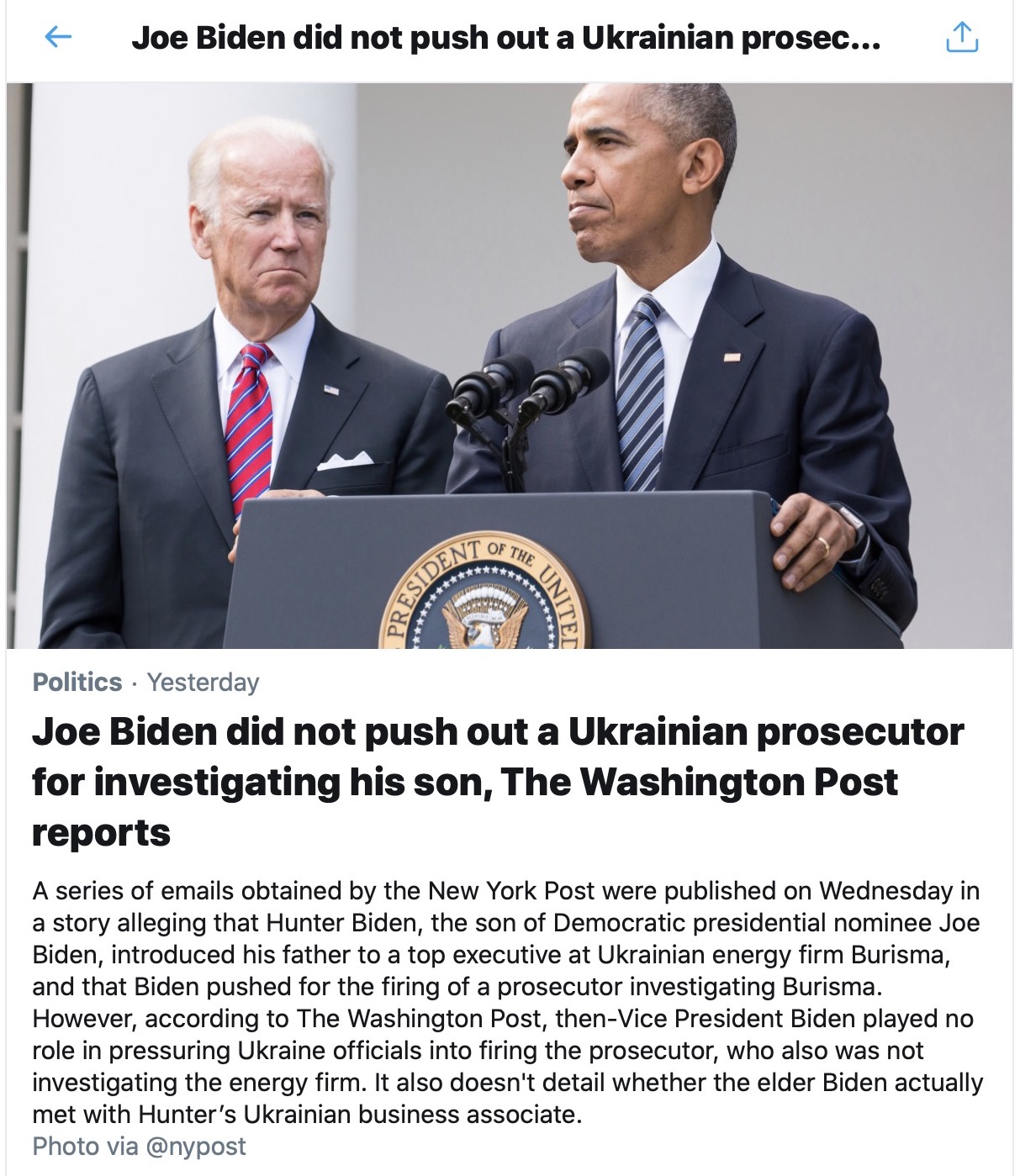 Now, this takes a bit of close parsing, because there are two lines of argument here about the firing of top Ukrainian prosecutor Viktor Shokin, one of which is factual and one of which is blatant disinformation.

The Washington Post article that’s linked is “[a] quick guide to Trump’s false claims about Ukraine and the Bidens” — which, whatever. It’s a slanted piece which still doesn’t prove Twitter’s point; there’s nothing in it that debunks Joe Biden’s own claim that he pushed out Shokin.

The evidence provided by The Post is that Shokin — who was generally acknowledged to be corrupt and inept in his role — wasn’t investigating Burisma at the time and that his firing was lauded internationally. That’s all well and good, but Twitter informed its users that “then-Vice President Biden played no role in pressuring Ukraine officials into firing the prosecutor,” a blatant lie.

During a 2018 appearance at a Council on Foreign Relations event, Biden boasted about getting Shokin fired by threatening to withhold loan guarantees to Ukraine.

“I looked at them and said: I’m leaving in six hours. If the prosecutor is not fired, you’re not getting the money,” Biden said.

Shokin was indeed fired. As The Post reported, “Biden managed to squeeze months of diplomacy into a few hours when he recounted the story years later at the Council on Foreign Relations.” But its not really up for debate that the then-vice president pushed for his firing.

Shokin, meanwhile, has said that at the time of his 2016 dismissal, that he had “specific plans” to tackle corruption within Burisma, which “included interrogations and other crime-investigation procedures into all members of the executive board, including Hunter Biden.”

Now, it’s worth noting that’s all pretty much a crock. Like the vast majority of Ukrainian politicians, Shokin would have been unemployable in a government sector where corruption wasn’t tolerated; if he’d remained in his position, he almost certainly had no intention of undertaking any investigation of the vast web of malversation that undergirds Ukraine’s power structure.

However, there are two things worth pointing out:

In fact, the investigation was entirely incidental to the story itself, which dealt with emails that indicated Hunter Biden was a conduit to power for Burisma executives. In a 2014 email, Vadym Pozharskyi, reportedly Burisma’s No. 3, thanked Hunter for “giving an opportunity to meet your father and spent [sic] some time together,” according to the Post.

In an earlier email, he asked Hunter’s “advice on how you could use your influence” for Burisma’s benefit, the outlet reported.

The Biden campaign has denied the meeting between Pozharskyi and the former vice president took place.  What it hasn’t denied is that the emails are authentic — something that casts doubt upon Joe Biden’s claim he had no knowledge of his son’s business dealings in Ukraine.

Their denial has consisted, more or less, of what Biden campaign spokesman Jamal Brown said: that “Twitter’s response to the actual article itself makes clear that these purported allegations are false and they’re not true and glad to see social media companies like Twitter taking responsibility to limit misinformation.”

The establishment media can crow all they want about the email release potentially being some form of foreign interference or political tricks from the Trump campaign.

If you want a quick rundown of the laments of the left, The Verge has a handy list of pretty much all of them. The problem is there’s no evidence as of yet to support any of this — and even if there was, Hunter Biden peddling influence is still news. The only way it isn’t is if the emails are fakes — and no one seems to be seriously debating their provenance.

Second, Viktor Shokin may have been a corrupt prosecutor whose half-hearted attempts to go after Burisma were part of the reason the world wanted him fired. That’s not the point. Joe Biden still had a part in Shokin’s firing, despite the fact he had a conflict of interest because of his son’s position on Burisma’s board.

Twitter, meanwhile, denies Joe Biden even had a part in the firing. Perhaps Twitter should’ve checked with the candidate himself before they shared this tidbit of disinformation.