A biological male who identifies as a transgender woman won a women’s world championship cycling event on Sunday.

Rachel McKinnon, a professor at the College of Charleston, won the women’s 35-39 age bracket at the 2018 UCI Masters Track Cycling World Championships in Los Angeles, California. 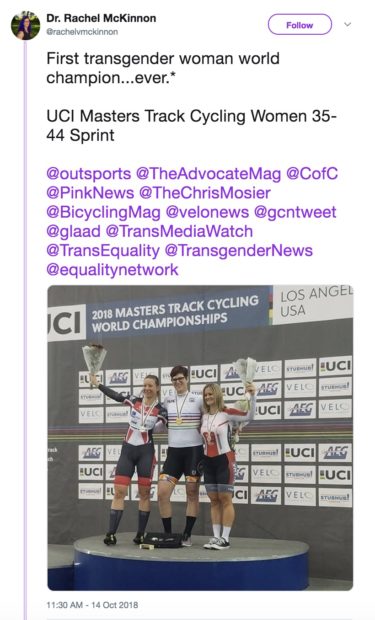 Allowing biological males who identify as transgender women to compete in women’s athletic events has been a controversial subject, as critics have argued that it puts the female competitors at an inherent disadvantage.

McKinnon did not immediately return an email seeking comment for this article.

McKinnon in January was quoted in USA Today arguing against requiring biological males to suppress testosterone as a requirement for competing against women.

“We cannot have a woman legally recognized as a trans woman in society, and not be recognized that way in sports,” McKinnon told USA Today.

“This is bigger than sports and it’s about human rights,” McKinnon said to USA Today.

“By catering to cisgender people’s views, that furthers transgender people’s oppression. When it comes to extending rights to a minority population, why would we ask the majority?”

“I bet a lot of white people were pissed off when we desegregated sports racially and allowed black people. But they had to deal with it,” McKinnon concluded.

Related:
Biological Man Enters Skateboarding Contest as Transgender, Look What He Did to Pre-Teen Girl Competitors

Colin Kaepernick's recent workout with the Las Vegas Raiders was not good, one NFL Hall of Famer says. Kaepernick's agent disagrees.
By Jack Davis  June 27, 2022
Next