Thomas Jipping — a senior legal fellow with The Heritage Foundation and former chief counsel to now-retired Sen. Orrin Hatch on the Senate Judiciary Committee — told The Western Journal that judicial vacancies were in the triple digits when Trump took office, and they are even higher now.

Trump is nominating people to fill the openings, but Democrats are purposefully slowing down the process after nominees clear the Judiciary Committee, according to Jipping.

“The problem in the confirmation process is occurring on the Senate floor,” Jipping said.

“There are several different tactics the Democrats are using to make the confirmation process after nominees get out of the judiciary committee as slow as possible.”

“That is radically different from the way it was before the Trump administration, but that is the way it’s being done with every Trump nominee,” he added.

The Capitol Hill veteran explained that once nominees clear the committee, they must be scheduled for a full Senate confirmation vote, but Schumer is refusing to cooperate with Senate Majority Leader Mitch McConnell of Kentucky to do so.

When the minority party does not cooperate, it requires a cloture vote by the Senate to end debate on each nominee, which, if successful, still triggers 30 additional hours for deliberations before the full vote can be held.

The effect is to slow down the vote for two to three legislative days.

“Democrats are forcing the Senate to take a cloture vote, a separate vote to end debate, on every single judicial nomination,” Jipping said.

Jipping pointed to The Heritage Foundation’s “Judicial Appointment Tracker,” which compares how all presidents going back to Ronald Reagan fared at the same point in their time in office.

According to the tracker, there have been 94 cloture votes for Trump’s judicial nominees so far, while Barack Obama’s had just three at this point in his presidency.

That translates to over 70 percent of the current president’s picks having to cross the cloture threshold, compared to just over 3 percent for Obama.

Trump’s nominees have also faced more opposition in the actual confirmation vote itself.

Sixty-four of them (48 percent) had greater than 25 percent of the senators vote against them compared to just 2 percent for Obama.

Jipping said the problem is not the quality of the nominees themselves, but that Democrats are opposing them as a way to show their disapproval to the president.

Indeed the American Bar Association — which has a history of taking liberal positions, as GOP Sen. Ben Sasse of Nebraska chronicled — has given Trump’s picks nearly the same percentage of “well qualified” ratings as it did Obama’s.

The chart below from Heritage’s “Judicial Appointments During the 115th Congress” shows how the four most recent presidents’ nominees stacked up. 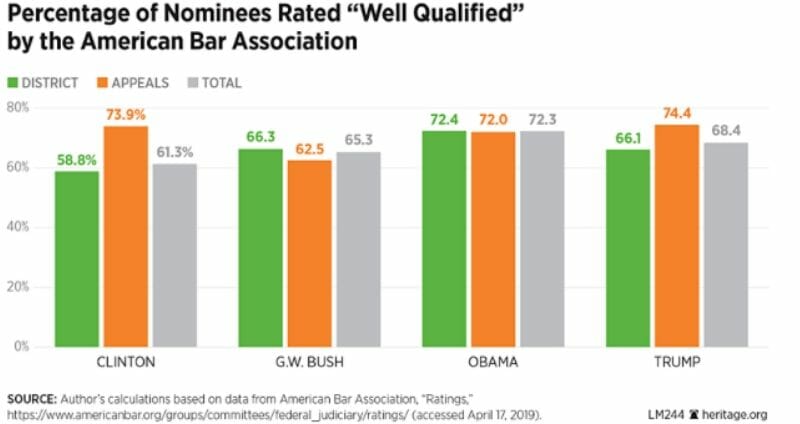 “The kind of opposition that judges are facing today isn’t being reported, isn’t being told,” Jipping said.

“And yet, that’s in my opinion the most radical change in this particular era in how our government is functioning.”

Trump, working in partnership with McConnell, has successfully appointed 132 federal judges to date, including a record 43 to federal appeals courts, but they have had to overcome consistent Democratic opposition.

The Western Journal reached out to Schumer’s office for comment, but did not receive a response by the time of publication. The story will be updated if and when a response is received.