When the Southern Poverty Law Center beheld Monday’s major “Patriotism Over Socialism” event in Gilbert, Arizona, it issued a “Hatewatch” warning on its website, focusing on what it called hate groups that would attend and fuel racist speeches.

In an exclusive interview with The Western Journal, organizer Kevin Jackson gave the SPLC a verbal eye-roll as he reacted to its denigration of the Tea Party-sponsored event, which he said “showcases America in all its glory.”

“I find it humorous that the SPLC thinks that an event being put on by a black American is racist,” Jackson, executive director of The Black Sphere and syndicated radio host of “The Kevin Jackson Show,” said Saturday.

Jackson said that the SPLC should have learned about the event before condemning it. “The left is offended if the wind blows in the other direction,” he said.

“We’ve got two Muslim females that are speaking at the rally. Multiple women are speaking on all kinds of issues,” he said.

“We didn’t intentionally try to check boxes, but as far as that goes this is one of the most diverse meetings you can possibly have,” he said.

But Jackson said liberals will always find a way to attack those who don’t fall in line with the ideological left. “When you check all the boxes as a conservative, it’s racist,” he said. “We don’t check boxes, we invite people that are interesting and relevant.”

He said leftists “Have to demonize; that’s what they do. … They’re checking boxes while we’re inviting people who believe in the core principles that formed this country.”

Jackson said the event, held the same day federal income taxes are due, is not restricted to people of one perspective.

“We hope Democrats want to be there. We want anybody to be there to understand these principles,” he said. “I would recommend anybody attend an event like this to dispel myths and deepen understanding.”

“Attend the event if you believe in the core principles of America as Donald Trump now espouses them,” he said, adding that the rally will celebrate America’s diverse and deep culture and the belief of Americans that “a strong America makes a stronger and better world.”

“If you leave this rally with the notion that the people who make up grassroots America, you would have to be looking with jaundiced eyes,” he said.

“I’m not talking about the people who come to disrupt,” he added. “We want to interface with people of different views and still get along.”

RELATED: SPLC Changed Black Separatist Listings Because They Were 'Born Out of Valid Anger' Against Whites 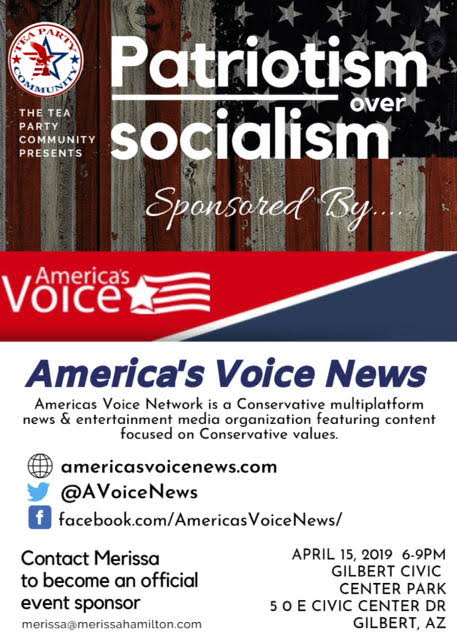 Shaun Hair, the executive editor of The Western Journal, will also speak, as will Farhana Shifa of the Arizona Republican Asian-American Coalition, Mona Oshana, whose family fled Iraq during the regime of Saddam Hussein, and Jacek Spendel, founder and president of the Freedom and Entrepreneurship Foundation and executive director of the Polish-American Leadership Academy.