Watch: Psaki Manages to Embarrass Herself and Biden with Stunning Answer

Former President George W. Bush seemed to imply during his remarks commemorating the anniversary of the Sept. 11, 2001, terror attacks that the same elements which took down the twin towers were also responsible for the Jan. 6 Capitol incursion.

While not referring to Jan. 6 directly, Bush’s comments appeared to be directed at the event.

“We have seen growing evidence that the dangers to our country can come not only across borders but from violence that gathers within,” he said.

Says domestic extremists and those abroad share a “disregard for human life” and a “determination to defile national symbols.”

“They are children of the same foul spirit, and it is our… duty to confront them.” pic.twitter.com/linoBvvY7j

Trending:
'Dog the Bounty Hunter' Says He's Made a Major Breakthrough in the Gabby Petito Case

Bush made the remarks from the location of the crash of United Flight 93 in Pennsylvania on 9/11.

Members of both sides of the political divide caught on to the comments from the former president. High-profile conservatives lashed out at Bush online:

Bush is publicly comparing 9/11 to Jan 6

Are you paying attention yet?pic.twitter.com/ByOi5hEoXt

This is who he is

You had Bush’s back.

He has again stabbed yours.

Related:
Trump Unleashes on George W. Bush for Teaming with Liz Cheney: 'The One Who Got Us Into the Quicksand of the Middle East'

Recap: this FAILURE was Asleep during the summer of 2001-Did nothing when SPECIFICALLY WARNED about Bin Laden Planning to Crash Planes into buildings. Inexperienced. Waited A MONTH before Retaliating. Stupidly Invaded IRAQ (ZERO WMDs)-now playing the JAN 6 card? Go Home George pic.twitter.com/j81CEeXLwq

Bush, however, courted significant favor with members of the establishment media after his comments from Pennsylvania.

Good for Bush: “In their disdain for pluralism, in their disregard for human life, in their determination to defile national symbols, they are children of the same foul spirit. And it is our continuing duty to confront them.” https://t.co/bNGh9FyRW5

Former President Bush in Shanksville compares Jan 6 insurrectionists to 9/11 hijackers:”in determination to defile our national symbols they are children of the same foul spirit and it is our duty to confront them.” Wow

Former President George W. Bush used the occasion of a September 11 speech to slam violent U.S. political extremists such as the Jan. 6 insurrectionists as “children of the same foul spirit” as 9/11 terrorists.https://t.co/0bj3QiyKdS

The former president also asked Americans during his remarks to be welcoming of immigrants and refugees from Muslim-majority countries, citing national unity and the political climate following 9/11.

“At a time when nativism could have stirred hatred and violence against people perceived as outsiders, I saw Americans reaffirm their welcome to immigrants and refugees. That is the nation I know,” Bush said.

Bush: “At a time when nativism could have stirred hatred and violence against people perceived as outsiders, I saw Americans reaffirm their welcome to immigrants and refugees. That is the nation I know.”

Bush, it is worth noting, was not incredibly vocal as leftist bands of radical extremists burned American cities throughout 2020 and targeted conservatives and police officers. The former president did release a statement in June of 2020 calling for a peaceful approach to “lasting justice.”

“Looting is not liberation, and destruction is not progress. But we also know that lasting peace in our communities requires truly equal justice,” Bush said. “There is a better way — the way of empathy, and shared commitment, and bold action, and a peace rooted in justice. I am confident that together, Americans will choose the better way.”

However, whether Americans did indeed choose “the better way” is doubtful. In addition to the general looting and violence across the nation in the summer of 2020, antifa and other radical groups repeatedly targeted a federal courthouse in Portland, Oregon, last year.

From 2018 to today, he's spent countless hours on the road taking a camper trailer to someone who just lost their home.
By Amanda Thomason  September 28, 2021

When staff pressed management for an answer, they were told that the cameras were installed in 2015 but have been non-operational for some time.
By Amanda Thomason  September 28, 2021

Heroes One Day, Fired the Next: Over 40k Health Care Workers Face Termination as New York Rolls Out Mandate

Many of these health care workers were once celebrated as heroes. Now, they may very well be losing their jobs.
By Michael Austin  September 28, 2021

A Twitter blue check who's made a name in the mainstream media has taken on a job that should worry every parent in America.
By Isa Cox  September 28, 2021

The bottom line is that contrary to what Biden told Stephanopoulos, his military advisers recommended that he leave troops in Afghanistan.
By Elizabeth Stauffer  September 28, 2021

Biden's support among independents in the Gallup poll was once at a solid 61 percent. In just three months, it's fallen precipitously.
By C. Douglas Golden  September 28, 2021

"Even if the reconciliation bill lands with a calculated deficit impact of zero, the president will still be in a deficit hole ..."
By Andrew Jose  September 28, 2021

A bartender's accusations of inappropriate sexual behavior against CNN's Don Lemon looks to be headed for a courtoom early next year.
By Brett Davis  September 28, 2021 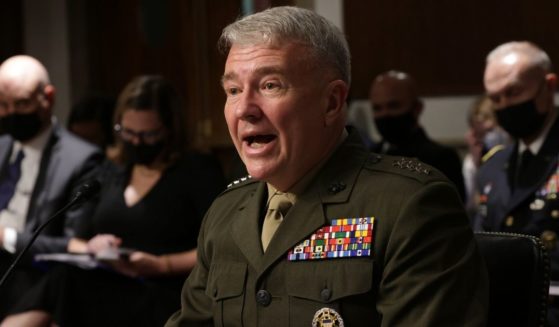 CENTCOM Commander Contradicts Biden: 'I Recommended That We Maintain 2,500 Troops in Afghanistan'

McKenzie testified that his assessment was if the U.S. withdrew its forces, it would lead to the collapse of the Afghan military.
By Randy DeSoto, Patriot Project  September 28, 2021