As a mom of three, there is nothing more important to me than the safety of my family.

In Arizona, there are millions of moms like me who are willing to fight for the safety of their children.

Before 2016, illegal immigration in Arizona put families at tremendous risk.

With an unsecured southern border, our state was virtually an open highway for illegal immigration, drug smuggling, and human trafficking.

But when President Trump announced his candidacy, he prioritized the safety of Arizona families.

As a father himself, President Trump understands the importance of family safety.

He is delivering on his promise to build a wall on our southern border.

And, as of today, over 275 miles of border wall have been built — with 450 miles expected by the end of the year.

As our nation celebrates another year with stronger border security, Joe Biden is running on a platform to undermine the safety of Arizona families.

His radical left-wing policies aren’t just some theoretical proposal; they present a direct danger to mothers in border states.

If he were elected, deportations would be halted, immigration law enforcement would be shut down and immigration detention facilities would be eradicated.

Biden does not even have the courage to admit that his policies would lead to open borders.

You don’t have to take that from me; that’s what former Obama-Biden administration DHS Secretary Jeh Johnson said about Biden’s policies.

Biden’s running mate, Kamala Harris, has even gone a step further by planning to decriminalize illegal border crossings and promise citizenship for millions of illegal immigrants.

If she and Biden are elected, that promise would worsen unemployment and decrease wages for American workers in Arizona and across the nation.

But the radicalization of Joe Biden doesn’t end with Kamala Harris.

One of Biden’s senior advisors, Bernie Sanders, is a strong proponent of illegal immigration.

In fact, the Biden-Sanders policy agenda goes even further — promising not to deport illegal aliens and even giving them access to public health care.

These policies not only threaten safety for families in border states, but they also incentivize drug smuggling and child trafficking.

Over the past four years, President Trump’s leadership has led to a direct reduction in illegal crossings and drug trade.

But I still worry for the safety of my children.

I worry because I know that this election is a decision for the future of Arizona. I’ll be voting for the only candidate who has a proven record of fighting for their safety — President Donald J. Trump. 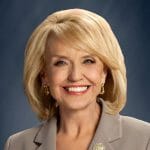