Days after the Senate and President Trump asked the FBI to conduct an investigation into sexual misconduct allegations of Supreme Court nominee Brett Kavanaugh, users began notice a trending hashtag on Twitter. Now, that hashtag, “#KillKavanaugh,” has many conservatives crying foul.

Users began to report the hashtag when they simply typed in “kill” into Twitter’s search feature. When the word is typed in, Twitter auto-completes the search with the suggestion, #KillKavanaugh.

Additionally, if a user just puts in “ki” they are given the option of using “#KillKavanaugh” as well. 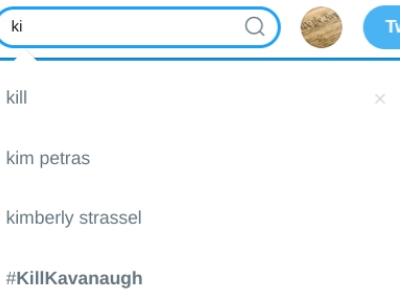 Instapundit was one of the first accounts to report the hashtag, and as seen from the screenshots above, is confirmed by the Western Journal.

Breitbart News reports that while most of the use of the hashtag is used to criticize the hashtag, many of the earlier tweets have been banned for using it “unironically and uncritically.”

There are some who would argue, however, that the phrase “Kill Kavanaugh” is meant to describe his nomination to the Supreme Court just like a piece of legislation would be “killed.”

However, Breitbart argues that this hashtag is an example of the “double standard” Twitter displays towards conservatives.

Allum Bokhari for Breitbart writes, “Twitter has in the past been slow or unwilling to address abusive or violent tweets against conservatives and Republicans. When the daughters of Islam critic Pamela Geller were bombarded (sic) with abuse earlier this year, Twitter did nothing.”

Other users have come to a similar conclusion.

So #killkavanaugh is acceptable, but James Woods gets banned for making fun of beta males?

“In fact,” Bokhari continues, “some of the abusive tweets remain on the site, undeleted. In 2016, death threats against sitting Republican senators were allowed to remain on the platform for weeks.”

Kavanaugh’s seat on the Supreme Court remains in question as Republicans requested the White House to ask the FBI to look into sexual misconduct allegations made by Christine Blasey Ford as well as two other women.

On Friday, the Senate Judiciary committee sent out a press release saying, “The supplemental FBI background investigation would be limited to current credible allegations against the nominee and must be completed no later than one week from today.”

President Trump responded to the request saying via a statement by Sarah Sanders, ‘“I’ve ordered the FBI to conduct a supplemental investigation to update Judge Kavanaugh’s file. As the Senate has requested, this update must be limited in scope and completed in less than one week.”

In New York’s Adirondack Mountains, the hamlet of Old Forge recorded a temperature of minus 36 degrees early Saturday.
By The Associated Press  February 4, 2023
Next