When even The Washington Post’s fact-checker is chiding Jimmy Kimmel for “inventing a story of malfeasance” about Vice President Mike Pence, it’s fair to say the situation is pretty bad.

The “invention,” in this case, involved a video which was deceptively edited to make it appear as if Pence wanted to move empty boxes of personal protective equipment for a photo op.

It was obviously a joke. The clip that was shared had obviously been deceptively edited.

Nobody seemed to realize it.

Trending:
Physicist to Tucker Carlson: Climate Change Is 'Fiction of the Media,' Not an 'Existential Threat'

“Since it was going so well and also because he didn’t realize he had a mic on, Magic Mike decided to keep it going,” Kimmel said at the top of his show. “Listen in closely here.”

When Pence is told the remaining boxes are empty, he says “Well, can I carry the empty ones? Just for the camera?”

Ah, Jimmy, you card you. Remember the old stupid schoolyard joke about something being “so funny I forgot to laugh”? Without Jimmy’s audience there, being told to laugh so that I know when to laugh, I’m kind of having a hard time myself.

Democratic strategist Matt McDermott posted a 40-second snippet from Kimmel’s bit and things took off from there. It was retweeted by a whole bevy of people, a list of whom we’ll get to in a second.

Here’s a problem: The clip was deceptively edited.

The volume on the Kimmel clip may be difficult to hear, but there’s definitely laughter in the background. Also, it cuts off a part of a line; after someone says “absolutely” on Kimmel’s video, they then quip, “they’re a lot easier.”

Then, Pence can be seen shutting the van doors — proof he had no intention of carrying the empty boxes for a photo op.

Here’s an unedited version of @VP Pence delivering PPE to Woodbine Rehab Center. The clip from @JimmyKimmel and sent viral by @mattmfm & others is quite deceptive. Pence is clearly joking when he talks about empty boxes for the camera, & shuts the van doors right after the quip. pic.twitter.com/HyV8iBiljS

The Washington Post’s Glenn Kessler said the video was obviously fake news, albeit in his own Kessler-ian way of doing so.

“With so many well-reported articles about the Trump administration’s mishandling of the coronavirus pandemic, why would anyone resort to inventing a story of malfeasance?” he began his Friday fact check of Kimmel’s video.

“Kimmel is a comedian, but he still should be careful about perpetuating a narrative that the media peddles ‘fake news.’ This was certainly a phony tale, and it can undercut accurate and dogged reporting by real reporters.”

“[I]t would appear that @vp was joking about carrying empty boxes for a staged publicity stunt,” Kimmel tweeted Friday.

Advertisement - story continues below
Should Jimmy Kimmel's apology over the deceptively edited video of Mike Pence have been more sincere?
Yes: 100% (624 Votes)
No: 0% (2 Votes)

“The full video reveals that he was carrying full boxes for a staged publicity stunt. My apologies. I know how dearly this administration values truth.”

Tee hee. As for McDermott’s repost of Kimmel’s video, while Twitter flagged it as “Manipulated media,” it remained up as of Saturday morning. So much for big tech coming to the rescue

As it turned out, there were plenty of people who had retweeted this before it was revealed to be fake. MSNBC hosts Andrea Mitchell and Joe Scarborough, were among them: 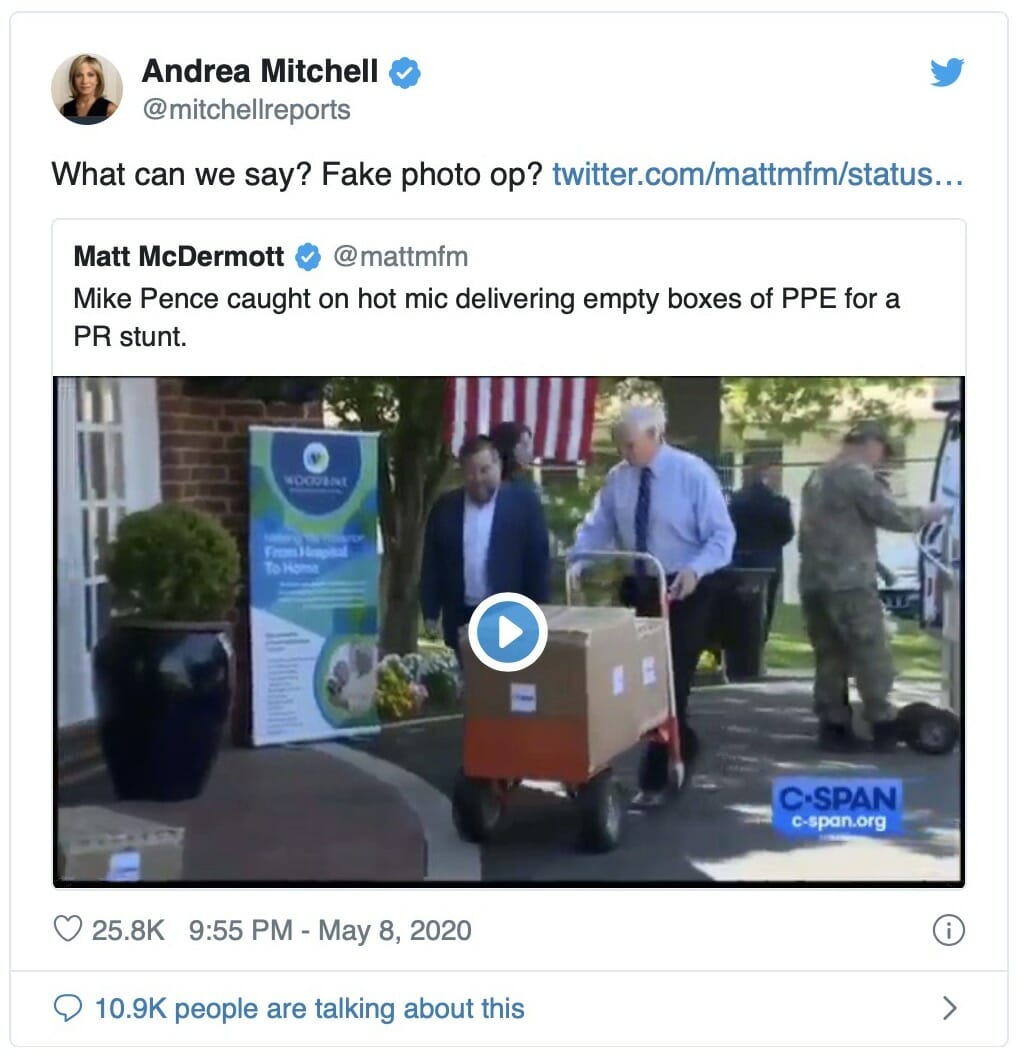 Scarborough would delete his tweet, and he, too, would “apologize.”

I guess Twitter is a full time job. I apologize to Mike Pence for retweeting a tweet that had been disproved. I’m deleting now.

You know, if you make a mistake, you can just say you’re sorry. Mitchell did.

Glad we asked…turns out he was joking! We checked the original tape. Reporter on scene says @VP did deliver PPE https://t.co/XkZJsVaOWR

That’s actually what you should do.

But as of Saturday morning, New Jersey Democratic Rep. Bill Pascrell Jr.’s retweet of the video was still up, without any sort of correction appended to his Twitter feed or as a comment to the video itself. 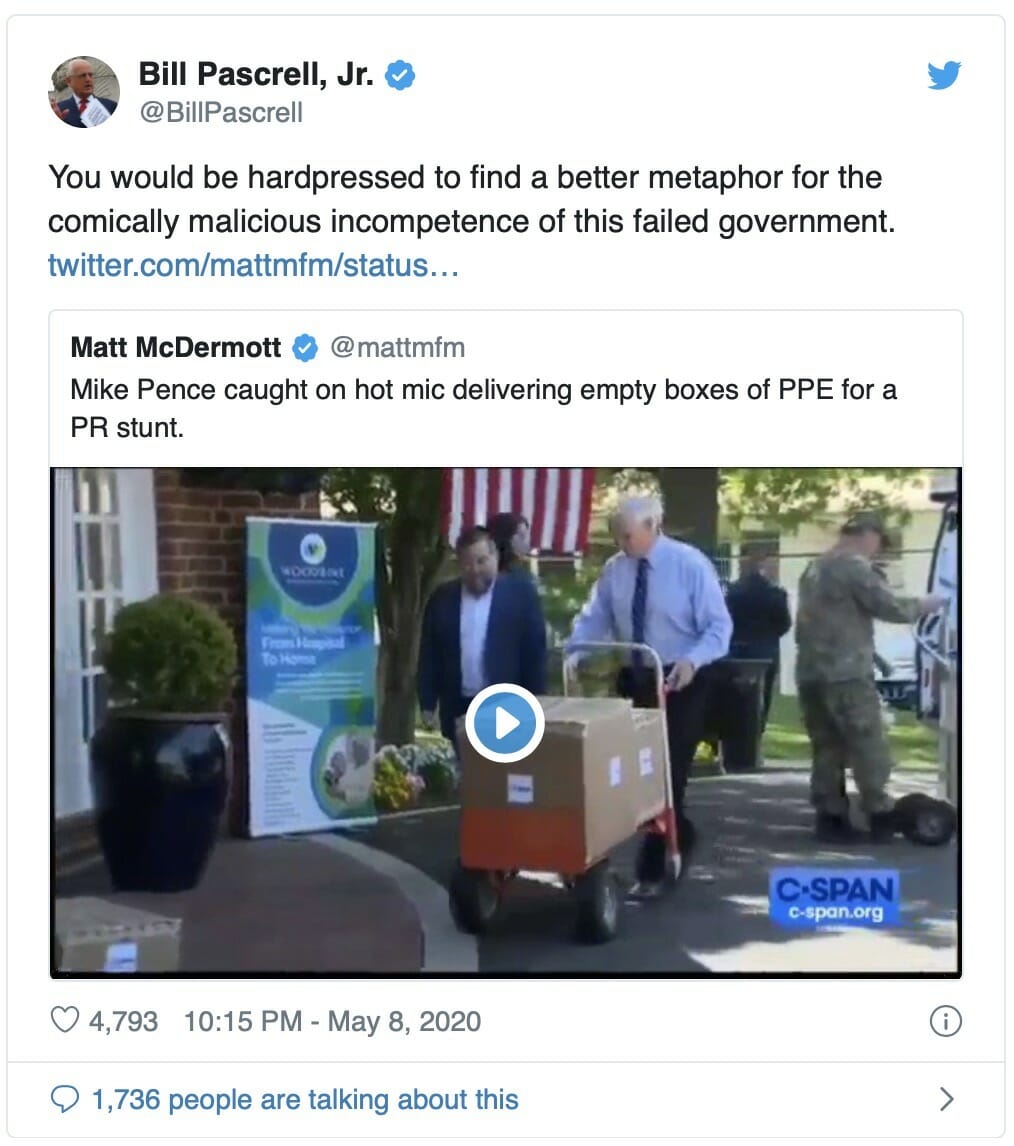 And here was former Bill Clinton adviser James Carville continuing to be a caricature of himself in a tweet that was also still up and uncorrected as of Saturday morning: 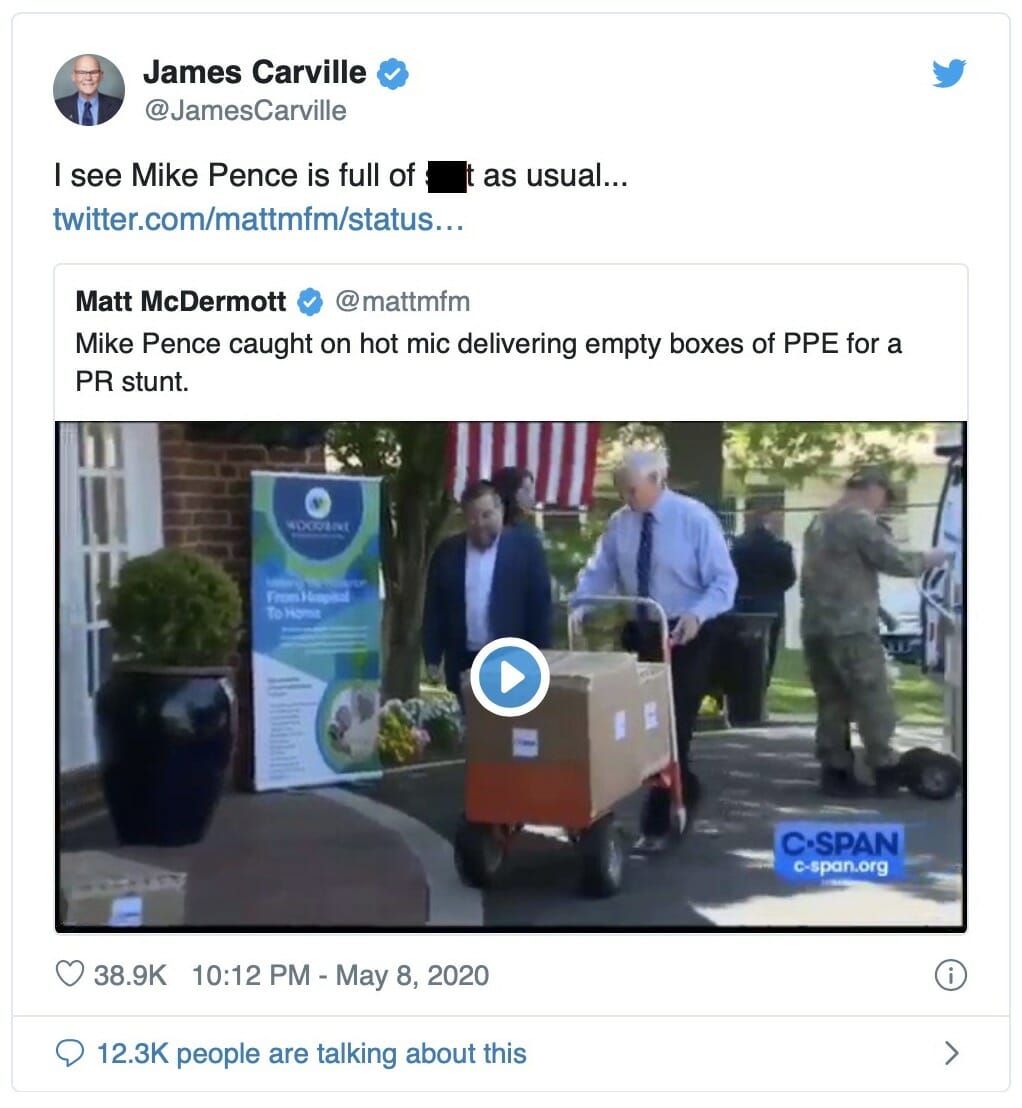 Andrew Bates, Joe Biden’s director of rapid response, deleted his tweet which said, “This is a metaphor for so much of their botched response,” according to The Hill.

This is a metaphor for something else, which is how much the media is willing to self-own when it comes to members of the Trump administration.

This is doubly true for Pence, who comes in for regular ridicule by the media not just for his political viewpoints and affiliations but also for his faith. Remember, when all else fails, Christianity is hilarious. This is what makes him so hateable to them.

Say what you will about Kessler playing the world’s tiniest violin for how Kimmel “undercut accurate and dogged reporting by real reporters” with his clip, but comedy is supposed to be about speaking truth to power among the left. It’s a hat that late-night hosts will proudly wear when it suits them and discard at moments like this when they’re just “making jokes.”

This wasn’t a joke and it wasn’t “fake news” in quotation marks. It was just straight-up fake news.

'My question is, where is this money for these operations going to come from?' Republican Rep. Mike Bost of Illinois said.
Karen Hardin June 22, 2021

'Now, why anybody would take something that's working and give it to the federal government is beyond me,' Kennedy said.
Dillon Burroughs June 22, 2021

Onondaga County Conservative Party Chairman Bernie Ment told Syracuse.com, 'It was a surprise to me this morning when I got [the letter].'
Dillon Burroughs June 22, 2021

Trump Org Takes NYC to Court Over Its Cancellation of Contracts After Jan. 6

Tucker: Lightning Is More Dangerous to Americans Than White Supremacy, Here Are the Numbers

'White supremacist violence, bad as it may be, is not a major threat. It's not even on the list, actually.'
Elizabeth Stauffer June 22, 2021

'I'm going to do my best and do my part to cultivate a culture that's accepting,' the former Penn State star said in his announcement.
Jack Davis June 22, 2021