MSNBC’s Joe Scarborough took a Twitter swing at President Donald Trump — but found himself on the losing end of the blow.

Scarborough was forced to apologize Monday after he fell for a fake tweet purported to be from Trump.

The “Morning Joe” host sought to jab the president after the Dow Jones Industrial Average fell by more than 2,000 points by sharing an old tweet that was posted by staunch Trump foe Rick Wilson.

“If the Dow Joans ever falls more than 1000 ‘points’ in a Single Day the sitting president should be ‘loaded’ into a very big cannon and Shot into the sun at TREMENDOUS SPEED! No excuses!” the tweet, supposedly from Trump in 2015, said.

“Not for a second did I think people would believe that to be genuine,” Usher said at the time when Politifact traced down the root of the tweet.

But Scarborough did, and he tweeted a snottygram at Trump in conjunction with the fake. 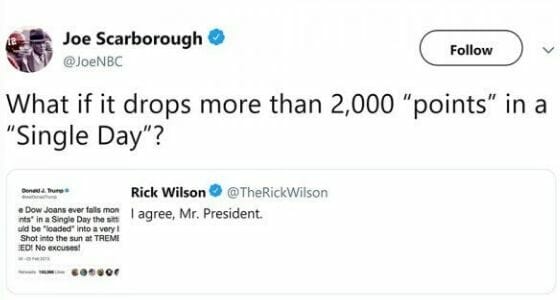 Eventually, Scarborough learned about his gaffe from Peter J. Hasson of the Daily Caller News Foundation.

He issued an apology while retaining his combative tone.

Peter, you got me. Oh my God. Owning the small government conservative again! What a great day for you and your Trump brigade. Now go back to cheering for higher deficits, higher tariffs, and the biggest stock market collapse in US history. Ha! Ha! Ha! You got me???

The apology came too late to forestall a tweet from Trump — the real one — on Tuesday.

“Wow! @foxandfriends blew away the competition of Morning Joke (which did very poorly) on MSDNC (Another Comcast sleaze production), and @CNN’s New Day, in the Morning Television Ratings. A total blowout, but that’s what you get when you treat ‘Trump’ fairly!” the president said, referring to February ratings that showed Fox News’ “Fox & Friends” with 220 months in a row of being the top-rated morning cable news show.

Wow! @foxandfriends blew away the competition of Morning Joke (which did very poorly) on MSDNC (Another Comcast sleaze production), and @CNN’s New Day, in the Morning Television Ratings. A total blowout, but that’s what you get when you treat “Trump” fairly!

The Dow rose 1,167 points on Tuesday, but Scarborough refrained from tweeting on the subject.

The Bible distinguishes between different kinds of anger. One kind is acceptable and even a moral responsibility, while the other is sinful.
By Ralph Drollinger  December 8, 2022
Next