“If you prick us, do we not bleed?” — William Shakespeare, Act III, Scene I, “The Merchant of Venice.”

The answer to the question, the plaintive plea of Shylock for the recognition of his shared humanity, is, of course, “yes.” It’s a universal human characteristic. Even still in the womb, a few weeks old, our hearts are beating rhythmically and blood courses throughout our tiny, still-developing bodies. Prick us then, and we will bleed.

But what if the question is phrased, “If you prick us, do we not feel pain?”

Again, for those of us already born, barring some pathological neural syndrome, the answer is certainly “yes.” But what about those still-developing humans in the womb? For years the consensus was “no,” not until well after birth. As science and medical observations advanced, the answer turned to “yes” but not until late in gestation (after 24 weeks) and only with development of the cortex (the outermost, thinking layer of the brain).

Science continued to advance, especially in our knowledge of how and when our nerves and other tissues form as we grow and develop in our mother’s wombs. But sadly, many turned a blind eye to the science, preferring a blinkered interpretation that fit their desired narrative on the status of the fetus in the womb.

The article is an honest, objective review of the scientific literature as it relates to the question of whether and when a child still in the womb can experience pain. Looking at the scientific evidence again with unbiased eyes, the authors’ answer was “yes,” perhaps as early as 12 weeks, and certainly after 18 weeks.

Derbyshire and Bockmann also reviewed the evidence for experiencing pain as it relates to any need for the cortex, or any psychological processes to “interpret” the pain signal. Their objective, balanced reading of the evidence pointed to pain experience without the need for the cortex (similar to the undisputed pain experienced by animals), mediated by other neural structures.

The literature on the science of fetal pain has indeed become extensive. But it is not just science, but also reason that brings this new recognition of the reality of fetal pain.

In an accompanying blog post on the Journal of Medical Ethics website, the authors explain further what led them to reconsider this topic. They had discussed the issue since 2016 and recent scientific findings opened the door to the jointly authored paper.

This openness to reconsider the evidence objectively and publish their reasoned conclusions is perhaps more surprising because the authors come from different viewpoints on abortion. They write:

“We both agree, however, that different views regarding abortion should not influence open and frank discussion about the possibility of fetal pain. Scientific findings pertinent to the question of fetal pain, and philosophical discussion of the nature of pain, should be assessed independently of any views about the rights and wrongs of abortion.”

“The quality of mercy is not strained. / It droppeth as the gentle rain from heaven / Upon the place beneath. It is twice blest: / It blesseth him that gives and him that takes.” — William Shakespeare, Act IV, Scene I, “The Merchant of Venice.”

In their paper, the authors also write that they “consider the possibility that the mere experience of pain, without the capacity for self reflection, is morally significant.” Neonatologist Dr. Robin Pierucci points out that not only the preponderance of scientific evidence but also the vast experience of medical workers in the neonatal clinic make the existence of fetal pain undeniable.

Denying the science doesn’t make the pain go away. And the common human experience of pain, which is, indeed, “morally significant,” means we are morally bound to recognize and prevent that pain. Likewise, we are bound to refrain from acts that inflict pain upon a fellow human being.

That mercy, as Shakespeare says, provides a blessing to us as well as to the unborn child. 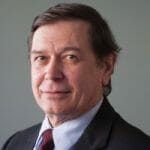 David Prentice
Dr. David A. Prentice is vice president and research director for the Charlotte Lozier Institute. He is also an adjunct professor of molecular genetics at the John Paul II Institute, The Catholic University of America and an Advisory Board Member for the Midwest Stem Cell Therapy Center.
Much to Abortion Industry's Chagrin, Scientists Find Unborn Babies Feel Pain Far Earlier Than Thought
See more...
Advertisement