Back in the day, Americans shopped in specialty or lavish department stores. As the craze for discount shopping spread across the country, the baby boom generation wanted to buy more for less, and old standbys for fashion were discarded on the wayside of 20th-century consumerism.

By the early 1960s, K-Mart came calling and local retailers struggled to stay afloat. Americans still paid a visit to the haberdasher for a new suit. If dress shoes wore out, you took the pair to the cobbler for new soles. When you splurged on the purchase of an Easter bonnet, you paid a call to the milliner — a fine, fancy word for hat maker.

These were the unspoken rules of American sensibility. You didn’t replace with new until the old wore out. And you were never fully dressed without a hat.

But in the decades that followed, women and men curiously abandoned the custom of wearing hats. Ranchers still wore Stetsons to protect against the hot sun. Once each year, women dressed up for the Kentucky Derby.

But for the most part, hats like Jackie Kennedy’s vintage pillbox or Sinatra’s top hat had become obsolete couture. Like all things sentimental and apple pie, the only hat to survive the fickle slush pile of fashion was the baseball cap.

It should come as no surprise that in 2016 the popular MAGA hat became an American icon — not as a fashion statement, but as symbol of something much more profound.

The embroidered logo “Make America Great Again” entered the political arena worn by candidate Donald Trump in his campaign to become the 45th president of the United States.

Voters from every demographic rushed to wait in line to attend a rally, donning the red caps to assuage a nation on the brink of collapse or change. Trump supporters were reminded in no uncertain terms of the gridlock in Washington politics-as-usual. To settle the score, they wore lookalike red caps, like a badge of honor and to spur this outside candidate on to victory.

But seriously, how can a hat evoke such emotion? The real question lingers like an elephant in the room, begging for an answer: What RINO would dare to wear it?

By endorsing an underdog, the simple MAGA slogan rebirthed a nation’s lost identity.

As the contest heats up, Trump has expanded his campaign inventory to include more apparel and red, white and blue dog collars. But beyond a doubt, the best-selling MAGA hat still speaks silent volumes about allegiance to his unique party.

If the fire-engine-red cap is not bold enough to irk suspicious, angry opponents, the ordinary folks — the deplorables — remain part of the public discourse with an unspoken statement.

If curious journalists want to know what truly inspires a Trump voter, the MAGA hat says it all. In the uniform audacity of wearing a baseball hat, a vehement “hell no” is heard as middle America crosses the line from having no fashionable political sense to calling out establishment media bias.

And then they stepped in it, when the establishment media began to pick on the wrong person.

Actually, he was just a kid, and CNN was forced to settle (upwards of millions) libel damages brought by the plaintiff, Nicholas Sandmann. You might remember the boy from Covington, Kentucky, who dared to wear a red hat while peacefully demonstrating in a pro-life march.

I applaud this legal game-changer. It’s full of courage and conviction and represents the beliefs of many Americans who stood behind Nicholas.

Some actions are too good to be forgotten. Certain words still mean things: America is a great nation, and sadly, it takes guts to argue that point with fake news.

I also understand the presence of a silent majority unafraid to speak the truths our founders claimed were self-evident. As I venture into the public square, this sleepy “Carrington” grandmother has just awakened to what’s really on the ballot in 2020. Freedom isn’t free.

As the first outing in new millinery can attest, wearing a MAGA hat is the perfect way to exercise my free expressions.

Of five neighbors I engaged recently, three gave me a heads-up. One woman snorted and glared, while another man walking a big dog looked away. I’m polling at under 70 percent favorable. Not bad for making a suburban political debut in a blue state. 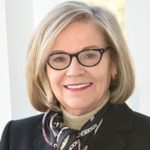 Rebecca Templeman
Rebecca Templeman is the author of the period-fiction novel “Seven Days in Carrington.” She has been a real estate broker since 1988 and is a resident of Albemarle County, Virginia.
Op-Ed: The Iconic 'MAGA' Hat Rebirthed America's Lost Identity
See more...