A Baltimore pastor is planning to hold his next church gathering despite having been visited by police Sunday after he conducted his weekly service.

The Rev. Alvin Gwynn Sr. said that on Sunday, despite having limited his congregation to 10 people, four patrol cars containing “eight or nine officers” showed up, according to The Baltimore Sun.

“You should have seen it, man, it looked like a police raid on a drug deal,” Gwynn, the senior pastor at Friendship Baptist Church, said.

He said one officer asked him if he was aware of an order from Maryland Gov. Larry Hogan that limited gatherings to 10 people or fewer. He also said the responding officers looked “bewildered” when he asked why they were there.

Gwynn said he will hold services again this Sunday and has plans to do so on Easter, as well, keeping a limit of 10 people. Gwynn said he also ensures people sit at least six feet apart.

“I’m not stupid,” he said. “I don’t want to go to jail. I’m more valuable to my community on the outside than the inside.”

“Remember, we have the First Amendment, which guarantees our most fundamental rights,” he said.

“Can the state stop people from coming out of their homes to worship? It’s a constitutional question. Congress can’t make laws governing worship or peaceful assembly. Our democracy wouldn’t be here if we didn’t have those rights,” he said.

Gwynn said his Saturday Bible study will continue, which is well below the 10-person limit.

The pastor also claimed his church is being singled out as the government flexes new powers during the coronavirus outbreak.

The Baltimore Sun reported that according to a report filed by police about Sunday’s incident, responding officers were ordered to “shut down the gathering.”

After their arrival, “the church service ended and the crowd dispersed,” the report read.

The decision to shut down the service came after Gwynn “advised [officers] that he will not be canceling any of his worship services in the future,” according to the document.

Police said any gathering that is a possible violation will be investigated.

“We encourage residents to call 311 with any nonemergency calls related to improperly open businesses or unlawful gatherings of crowds,” the Baltimore Police Department said in a statement. “Any officer that observes a business that is in violation of the governor’s executive order must investigate the complaint.”

The department “remains focused on keeping the public safe and will continue to work closely with our local partners to serve city residents and to decrease the spread of COVID-19,” the statement went on.

On Monday, Hogan issued a new order requiring Maryland residents to stay home aside from participating in what he termed “essential” activities. The order allows churches to conduct “minimal operations” without defining what those are.

Detective Chakia Fennoy, a Baltimore police spokeswoman, would not comment on how police would handle another Sunday service, but said investigations “will be conducted by our VICE team, who may shut down an establishment if it is found to be in violation.”

Police Commissioner Michael Harrison has said that, in general, police will enforce the law.

“When we find that people are not voluntarily complying, then the instructions will be to make a physical arrest,” he said. “We are working very hard in a proactive way to get voluntary compliance.” 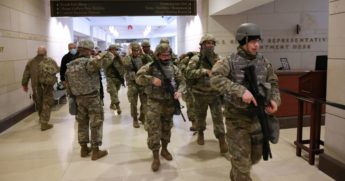