Hillary Clinton’s presidential campaign has transferred nearly $150,000 of leftover campaign funds to a company she solely owns in the months following her election defeat, according to filings with the Federal Election Commission.

The Clinton campaign has paid $149,457 to ZFS Holdings LLC since May 2017 for the purpose of “rent,” FEC filings show, but the campaign has left it unclear if it’s paying at, above or below fair market value for the office space it’s renting.

Also, the rent payments to ZFS were sent to the same address as Rorrie Gregorio, Clinton’s personal financial manager.

“Obviously, it has a certain fishiness to it,” former FEC chairman and founder of the Institute for Free Speech Brad Smith told The Daily Caller News Foundation about the rent payments.

If ZFS is undercharging the Clinton campaign for rent, it could “constitute something of value to the committee and would thus be an in-kind contribution,” according to a 1995 FEC ruling. But if ZFS is overcharging the campaign, it could mean campaign funds are going to the company Clinton solely owns.

Using campaign funds for personal use is a violation of federal campaign law. According to Campaigns and Elections, “knowing and willful” violations of the personal use rule can result in prosecution and jail time.

Clinton registered ZFS as a single-member LLC shortly after she left the Department of State in early 2013 for the purpose of managing her speech and book income, according to financial disclosures she filed with the FEC.

What Is The Clinton Campaign Renting From Clinton’s Personal Office?

Clinton signed a lease in 2014 for personal office space on the 27th floor of Tower 45 in Midtown Manhattan, according to news reports at the time. But ZFS is the actual leaseholder, according to CompStak Inc., a provider of real estate data.

ZFS is renting an estimated 6,500 to 7,000 square feet and costing in the low $60s per square foot, according to crowdsourced, analyst-reviewed lease information CompStak provided TheDCNF. This means Clinton’s LLC is estimated to be paying between $32,500 to $38,000 per month for her Manhattan digs. The lease, according to Compstak, began in the second quarter of 2014 and will expire in the second quarter of 2019.

After Clinton declared her candidacy in 2015, Politico reported that her campaign had installed 10 to 15 campaign staffers and interns to work regularly in the Clinton’s Tower 45 office space.

But the Clinton campaign didn’t direct rent payments to ZFS during the election. Rather, regular monthly payments of $29,346 to $33,488 were sent to Kamber Management, the property manager for Tower 45, filings to the FEC show.

The Clinton campaign made its last rent payment to Kamber on March 1, 2017. The campaign instead began directing rent payments to ZFS starting in May 2017. TheDCNF found no indications the campaign has changed locations or that ZFS holds a lease at any other location, so it appears the campaign is paying for a portion of Clinton’s Tower 45 office space. 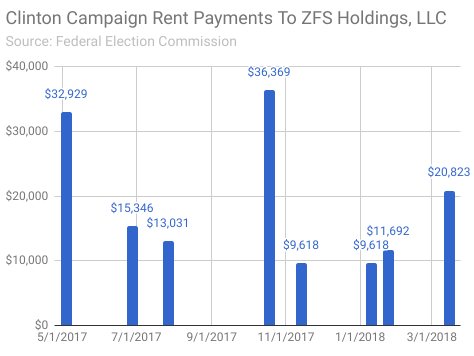 Related:
2 Months Prior to Raid, FBI Had Already Secured Docs - What Changed?

“I would think that’s not usual,” Smith told TheDCNF. “That would be something that would cast out as to whether they’re actually paying market value.”

“You can’t extend credit to a campaign on different terms than you would anybody else,” Smith said. “A landlord can’t say, ‘well, you just pay me what rent you can when you can’ — no, you can’t do that.”

Smith said the varying nature of the campaign’s payments ZFS lead him to believe there likely isn’t a formal sublease agreement in place between it and Clinton’s LLC.

“That’s what it sounds like, they don’t have any actual agreement,” he said.

Also in May 2017, Clinton announced that she had launched Onward Together, an organization established to lend support to progressive groups in “organizing around our shared progressive values, mobilizing voters, or running candidates for office,” its website said.

We're launching Onward Together to encourage people to get involved, organize, and even run for office. https://t.co/8exooosvZ5

Both sides of Onward Together are conducting business on the 27th floor of Tower 45 in Midtown Manhattan according to FEC and state filings, right alongside Clinton’s presidential campaign, which was still active as of March 2018.

And just like the Clinton campaign, Onward Together 501(c)(4) is making rent payments to ZFS, according to a budget it submitted to the North Carolina Secretary of State, which shows it had budgeted monthly rental expenses to ZFS ranging from $6,500 in May 2017 to $20,000 in December 2017.

In addition, the nonprofit side of Onward Together has brought on a handful of Clinton aides since launching in 2017, including longtime aide Huma Abedin, who earns an annual compensation of $48,000, according to a document filed with the New Mexico secretary of state.

The Clinton campaign contributed $800,000 to Onward Together when the organization was founded in May 2017, FEC documents show.

Four staffers are still on the Clinton campaign payroll as of March 2018, two of which appear to be splitting time between the campaign and either Onward Together or the Office of Hillary Rodham Clinton.

Kelly Mehlenbacher, the treasury manager for the Clinton campaign, is one of those individuals. The Clinton campaign has paid Mehlenbacher $58,312 since the beginning of 2017, coinciding with the $51,000 she’s estimated to have earned from Onward Together 501(c)(4) as its chief operating officer.

Robert Vincent Russo serves as the director of correspondence and briefings at the Office of Hillary Rodham Clinton. While his LinkedIn provides that he stopped working for the Clinton campaign in May 2017, he still collects $365 every other week from the campaign as of March 2018.

“During the campaign the office was a campaign office,” Clinton’s communications director Nick Merrill told The Washington Free Beacon, who first reported the nearly $150,000 in payments. “After the campaign, the office served as a personal office, a campaign wind-down office, and an office for Onward Together, so rent is split up accordingly.”

The Arrangement Is Shrouded In “Fishiness”

The legality of the Clinton campaign’s rent payments to ZFS depends on whether the campaign is paying fair market value for the office space it’s renting, according to Smith.

“The bottom line is that there’s a bunch of Clinton affiliated organizations that are renting space up there, and it doesn’t seem like there’s much really going on,” Smith told TheDCNF. “Rental payments all go to Hillary Clinton through her LLC.”

The FEC ruled in 1995 that a political campaign can rent space a candidate owns, provided the payments equal fair market value and the property is not the candidate’s personal property.

If the campaign pays more than the fair market value of the space it’s renting, the excessive payment would “unduly augment the earnings of an asset owned by the candidate,” the FEC ruled.

For example, Donald Trump’s presidential campaign made monthly payments of nearly $170,000 to Trump Tower Commercial LLC during the election.

“We calculated the rent based on the average rent per square foot in the area,” a Trump spokesman told Time in August 2016. “The campaign expanded from part of a single floor by adding the entirety of two separate floors.”

The Trump campaign was open about its arrangement with Trump Tower, but the Clinton campaign has been tight-lipped about its agreement with ZFS.

“ZFS was set up when Secretary Clinton left the State Department as an entity to manage her book and speaking income,” a spokesman for Clinton told The Guardian in 2016.

Clinton earned over $33 million in speaking and book income through ZFS from 2013 through 2015, according to her tax returns.

But ZFS does more than just manage Clinton’s speaking and book income. Documents reviewed by TheDCNF show that ZFS is the technical name for the Office of Hillary Rodham Clinton.

A former speechwriter for Clinton testified before the House Select Committee on Benghazi in October 2015 that he began working in Clinton’s personal office in February 2013, but his paychecks came from ZFS. 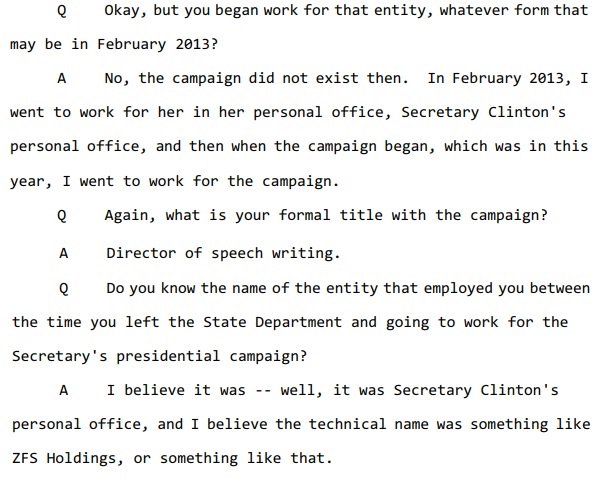 Clinton’s LLC has also owned four internet IP addresses since March 2014, according to the American Registry for Internet Numbers. The registered customer for the IP addresses is ZFS, under the care of Rorrie Gregorio — the same Rorrie Gregorio that serves as Clinton’s personal financial manager.

ZFS and Gregorio are also linked to Clinton’s use of a private email server during her time as secretary of state.

The Senate Committee on Homeland Security and Governmental Affairs sent a letter to Gregorio in September 2015 requesting information about why she and ZFS were identified on monthly invoices issued by Platte River Networks, the entity Clinton contracted with to support her private server.

It’s unclear if Gregorio responded to the committee’s request.

ZFS now operates Clinton’s personal website, which has been rebranded as “The Office of Hillary Rodham Clinton” since her defeat in the 2016 election, according to her website’s privacy policy.

A fight that resulted in the suspension of a Spirit Airlines employee was caught on camera at Dallas Forth Worth Airport.
By Richard Moorhead  August 12, 2022

On July 18, Democratic Rep. Rashida Tlaib speaks at a news conference in Washington, D.C., expressing her opinion that the Supreme Court should be expanded.(Jemal Countess / Getty Images

Democratic Rep. Rashida Tlaib Reportedly Raked in Tens of Thousands of Dollars in Rental Income as She Pushed for 'Nationwide Cancellation' of Rent

The Michigan Democrat's recent annual financial disclosure shows that she collected at least $15,000 and up to $50,000 in rental income.
By Matthew Holloway  August 12, 2022

A day at the beach turned deadly for a South Carolina woman when she was struck by a flying beach umbrella.
By David Zimmermann  August 12, 2022

'Parents don't know that we have this picture, this video, this trauma, this crime saved,' one former employee said.
By Michael Austin  August 12, 2022

The full search warrant and property receipts from the FBI's raid on Donald Trump's home have been released.
By Michael Austin  August 12, 2022

Actress Anne Heche is reportedly brain dead while her heart is technically still beating, according to a family spokesperson.
By David Zimmermann  August 12, 2022

'They could have had it anytime they wanted without playing politics and breaking into Mar-a-Lago,' Trump said in response.
By Randy DeSoto  August 12, 2022

The Centers for Disease Control and Prevention's announcement represents a major change in how the government deals with the virus.
By Warner Todd Huston  August 12, 2022
Next