Are you one of those people who buy into those #WWIII memes that popped up on Twitter after the United States killed Iranian Maj. Gen. Qassem Soleimani in a drone strike?

Rapper Cardi B is.

In fact, she’s decided she’s going to ask for citizenship in the third-most-dangerous country in the world, because that’s a great place to hide out from World War III.

Mrs. B — known legally as Belcalis Almánzar — made the announcement Friday on Twitter as tensions ratcheted up.

“Naaaaa these memes are f—in [laughing emojis] but s— ain’t no joke! Specially being from New York,” the rapper, best known for “Bodak Yellow” and “I Like It,” tweeted.

“Its sad this man is putting Americans live in danger,” she continued. “Dumbest move Trump did till date …I’m filing for my Nigerian citizenship.” 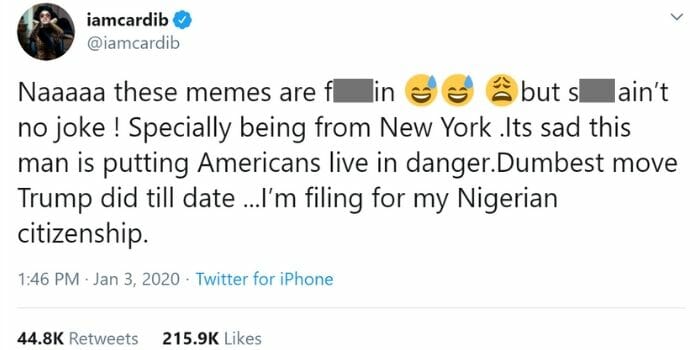 Granted, Cardi B isn’t what economists might call a “rational agent.”

She’s been in trouble for admitting that, before her rapper days, she drugged and robbed men for money. (Her defense for this, inexplicably, was that the men were “conscious, willing and aware” of being drugged and robbed.)

As a teen, she was a member of the Bloods gang.

She’s fond of Democratic presidential candidate Sen. Bernie Sanders of Vermont — going as far as to interview him — yet she went on an epic, profane rant about how she didn’t know where her tax money was going.

Here’s her explaining why Franklin Delano Roosevelt was her favorite president: “[H]e helped us get over the Depression, all while he was in a wheelchair. Like, this man was suffering from polio at the time of his presidency, and yet all he was worried about was trying to make America great — make America great again for real. He’s the real ‘Make America Great Again,’ because if it wasn’t for him, old people wouldn’t even get Social Security.”

A very little bit of knowledge is a dangerous thing.

RELATED: Judge Rules No Orders of 'Satan Shoes' to Be Filled

All of which is to say that maybe we shouldn’t be taking Cardi B too seriously — and yet, this thing got reported like it was no one’s business, to the point where a Nigerian government official responded to her request.

“As one in charge of the Diaspora for Ngr, We can’t wait to receive you again. Our doors are open, sister,” Abike Dabiri-Erewa said.

As for the “again” part, Cardi B has previously performed in Nigeria, according to the Daily Mail. One assumes she didn’t exactly see the whole country or even a sliver of it, and Dabiri-Erewa probably didn’t include the pamphlet disclosing that the country is one of the most dangerous in the world for expatriates.

InterNations’ 2019 survey of expatriate life included a safety and security category in which “respondents rated three factors including peacefulness, personal safety and political stability. The results were compiled to create a ranking of the most dangerous places to live,” Forbes explained.

Nigeria came in third, after South Africa and Brazil.

“We are not really free, cannot walk on the streets, cannot mingle with the Nigerians. There is always the possibility of danger,” a Hungarian expatriate said.

Meanwhile, a Rwandan expatriate talked about “the feeling of uncertainty. Almost anything can and might happen to me, anytime, anywhere.”

Now, granted, Cardi B has a lot of means to buy herself a lot of security. Perhaps she doesn’t want to “mingle with the Nigerians.” She’s also a former member of the Bloods who says she used to drug and rob men, so perhaps she’s used to and is willing to accept a certain amount of this kind of danger.

Still, it’s not exactly the best place to hide out from a war.

Nigeria wasn’t in the top 10 most dangerous in the Institute for Economics and Peace Global Peace Index for 2018, but it was No. 16, right in between North Korea and Lebanon. It is, in other words, sandwiched by a country that’s probably the odds-on leader for the nation most likely to be involved in a nuclear war and a country that’s overrun with Iranian proxies.

So, her dislike of Donald Trump is so reflexive her first thought is she’s safer in Nigeria — home of Boko Haram, the Islamic terrorist organization we’ve all kind of forgotten about and the likely culprit in a roadside bombing Monday that killed at least 30, according to Deutsche Welle.

The militant group is seeking to establish an Islamic state in Nigeria, which has the largest Muslim population in West Africa at more than 80 million people.

World War III is not going to happen. Cardi B is still much safer here than practically anywhere else in the world. That’s especially true when that somewhere else is Nigeria. This isn’t, as Cardi B is fond of saying, a money move.

But then that’s hardly the point. Any time Celebrity X says he or she is moving to Country Y because of Thing Z that Donald Trump did, you can just put the equation in parentheses and multiply it by zero. That’s how you figure out the percent chance they’re going to be loading up the U-Haul millionaire special and decamping from Beverly Hills to their country of choice.

Cardi B deserves a high grade for originality for picking Nigeria. Usually, it’s Canada or Sweden, something like that. Props for picking a country that’s 158th out of 189 countries in the Human Development Index ranking.

It shows, if nothing else, an impressive disregard for anything aside from a personal animus against the current administration.