The Secret Service says it is “aware” of comedian George Lopez’s controversial comment about a reported bounty placed on President Donald Trump’s head.

During an Iranian state TV broadcast of Soleimani’s funeral procession, a eulogist suggested crowdfunding an $80 million bounty for whoever kills Trump, according to the U.K. news outlet The Week.

Replying to an Instagram post about the reported $80 million bounty, Lopez wrote: “We’ll do it for half.” 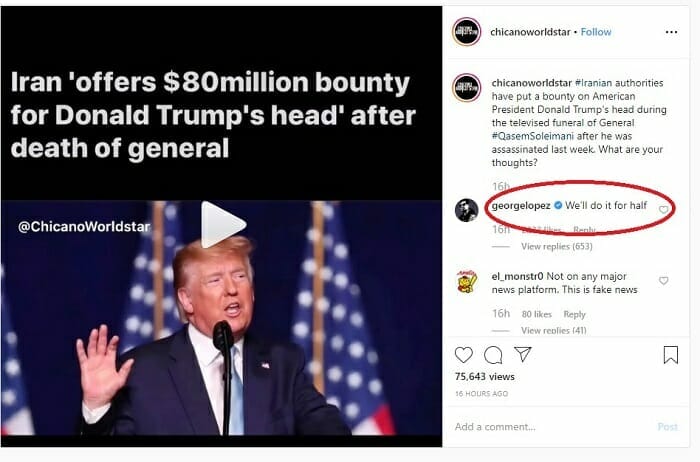 While the Secret Service would not go into specifics, the agency tasked with protecting the president said it is “aware” of Lopez’s post.

“The Secret Service is aware of the [post] made by Mr. Lopez,” an agency representative said in a statement to The Daily Caller.

“The Secret Service takes all threats against the President and or any of our protectees seriously, and as a matter of practice, we do not comment on matters involving protective intelligence,” the statement went on.

Do you think George Lopez's comments constituted a threat against the president of the United States?
97% (504 Votes)
3% (16 Votes)

Moreover, law enforcement sources told TMZ that the Secret Service was working to ascertain the legitimacy of Lopez’s apparent threat against Trump.

While Iran’s reported $80 million bounty on Trump appears to have just been a crowdfunding gimmick, some Iranian officials have issued threats against the U.S. in the wake of Soleimani’s death.

On Sunday, Abolfazl Abutorabi, a member of Iran’s parliament, vowed to take Iran’s revenge of Soleimani’s death to American soil.

“We can attack the White House itself, we can respond to them on the American soil. We have the power, and God willing we will respond in an appropriate time,” he said.

“This is a declaration of war, which means if you hesitate you lose. When someone declares war do you want to respond to the bullets with flowers? They will shoot you in the head.”

But Trump has promised swift retaliation if Iran strikes.

These Media Posts will serve as notification to the United States Congress that should Iran strike any U.S. person or target, the United States will quickly & fully strike back, & perhaps in a disproportionate manner. Such legal notice is not required, but is given nevertheless!

“These Media Posts will serve as notification to the United States Congress that should Iran strike any U.S. person or target, the United States will quickly & fully strike back, & perhaps in a disproportionate manner,” the president tweeted Sunday. “Such legal notice is not required, but is given nevertheless!”

Joe Setyon
Associate story editor
Joe Setyon is a deputy managing editor for The Western Journal who has spent his entire professional career in editing and reporting. He previously worked in Washington, D.C., as an assistant editor/reporter for Reason magazine.
@JoeSetyon
Joe Setyon is deputy managing editor for The Western Journal with several years of copy editing and reporting experience. He graduated with a degree in communication studies from Grove City College, where he served as managing editor of the student-run newspaper. Joe previously worked as an assistant editor/reporter for Reason magazine, a libertarian publication in Washington, D.C., where he covered politics and wrote about government waste and abuse.
Birthplace
Brooklyn, New York
Topics of Expertise
Sports, Politics
Trump Reveals When He'll Announce Decision on 2024 Campaign
Liberal Activist: Trump Led So Well on CJR That Biden Has Zero Excuse for Failure
Embattled GOP Congresswoman Reveals Who Republicans Attacking Trump Are Really Insulting
Ben Carson Urges Conservatives to Stand Up for Beliefs: 'If You Fight, You Will Win'
US Senator Sends Out the Warning: This Is the Biggest Threat to the Founding Fathers' Carefully Constructed Federalist America
See more...