Let’s see if the Secret Service is laughing.

Left-wing comedian George Lopez’s entertainment career might not be rocketing lately, but he found himself back in the spotlight on Monday after a controversial contribution to an Instagram post about an Iranian “bounty” placed on President Donald Trump’s life.

It’s questionable how real the “bounty” actually was. It was a suggestion from an anonymous voice on Iranian state TV during coverage of funeral proceedings for slain terrorist Gen. Qassem Soleimani, according to the U.K. website The Week.

But there’s no question about how the vocally anti-Trump Lopez responded on social media.

And the backlash has been fierce.

According to The Week, the idea of Iranians paying for Trump’s assassination in retaliation for Thursday’s drone strike that killed Soleimani at Baghdad’s airport arose from a male announcer eulogizing the general and his three-decade reign of terror in the Middle East.

Citing the Saudi news station Al Arabiya, The Week reported that the announcer said, “We are 80 million Iranians, if each one of us puts aside one American dollar, we will have 80 million American dollars, and we will reward anyone who brings us [Trump’s] head with that amount.”

That’s not quite as explicit or official as the barbaric bounty put openly on the head of writer Salman Rushdie beginning in 1989, when the late Ayatollah Ruhollah Khomeini first offered $2.6 million for Rushdie’s death as punishment for the novel “The Satanic Verses.”

(That bounty still stood in 2016, when it had reached $4 million, according to a report in The New York Times.)

But it’s still a call for the paid-for murder of an American president taking place on state-sponsored television in a country where “Death to America” is practically a national motto.

So, how did the Los Angeles native Lopez respond to Iranian talk of “80 million American dollars” for Trump’s murder? 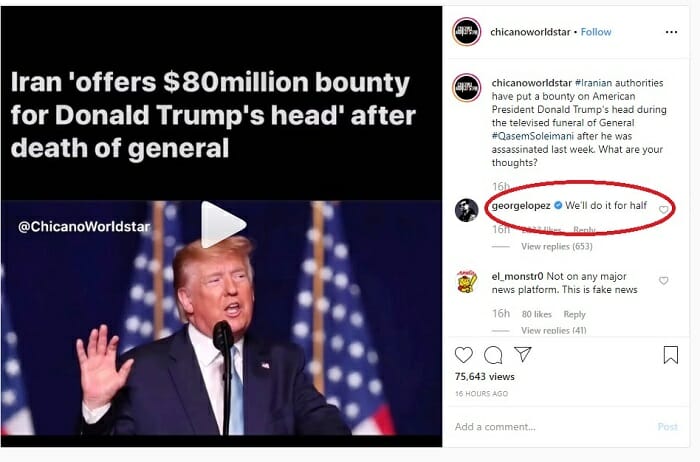 Considering that Lopez has been much more famous in recent years for his virulent Trump hatred than anything approaching comedy, it’s pretty clear that he wouldn’t mind at all if the president were killed.

In 2018, for instance, Lopez was charged with battery for an altercation with a Trump supporter at a Las Cruces, New Mexico, Hooters, according to Fox News.

In July of the same year, Lopez made headlines with a thoroughly gross video of himself appearing to urinate on the president’s star on the Hollywood Walk of Fame.

So, he’s a class act, clearly.

Social media users came down hard on Lopez’s crack about assassinating the president.

Conservative radio’s “The Great One,” Mark Levin, was one of them.

I think he needs a little visit from the secret service. It is not OK to threaten our President!!!!!

Not even funny as a joke. He needs a ‘wellness check’ from the Secret Service.

He’s following the Kathy griffin model, trying to resurrect a dead career that wasn’t very good to begin with.

That last one summed it up almost perfectly.

The Trump years have seen a steady stream of Hollywood has-beens recovering their time in the limelight by attacking the president — comedian Kathy Griffin is probably best known of them.

The administration has also seen its share of threats or quasi-threats from celebrities still in the public eye, like actor Johnny Depp musing about an actor assassinating the president and Democratic lawmakers including jokes about Trump’s assassination as a fundraising ploy.

But what Lopez is doing is on a different level entirely.

Officially or not, a foreign media outlet broached the subject of paying for the assassination of the president of the United States.

Lopez didn’t just agree, he said “we’ll do it for half” the amount mentioned.

Lopez supporters — there must be some — and the anti-Trump crowd will no doubt try to pass the whole thing off as just another unfunny joke by a comedian whose stop-and-go career shows he hasn’t been all that consistently funny to begin with.

A whole lot of Americans aren’t buying that, though.

As John Kerry Jets Across Globe on Climate Tour, His Family Flies Private Jet to Vacation in Idaho