It looks like support for Sen. Kamala Harris is as fake as her speeches.

When the Democratic nominee for vice president closed out her distinctly uninspiring speech on Wednesday night, she waved to a bank of video monitors showing rapturously applauding supporters. 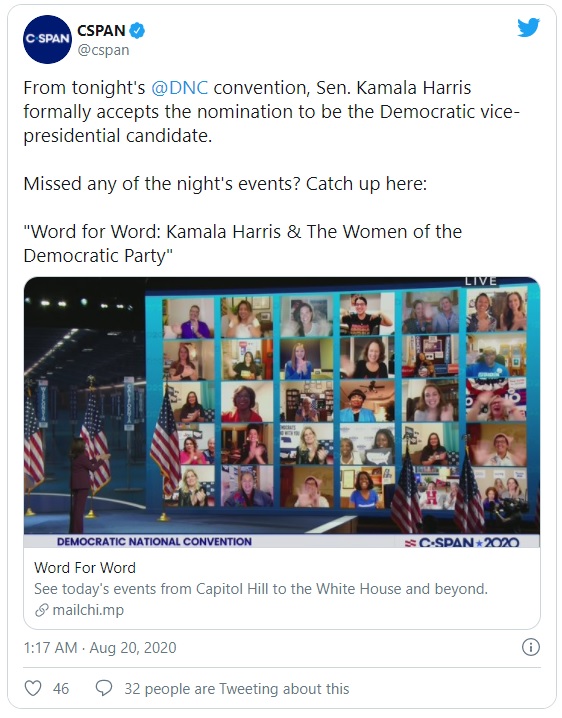 But sharp-eyed Trump campaign workers saw something else: Many of the screens showed the same figures twice.

Zach Parkinson, Trump campaign deputy director of communications, sent out the first image when it looked like just two of the scenes were dupes:

Apparently, the DNC couldn’t even find 30 people who were excited about Kamala Harris, so they had to duplicate someone’s livesteram pic.twitter.com/1cLhQRRkzg

Then there were four:

And, finally, it turned out six of the screens were duplicates.

Andrew Clark, rapid response director for the Trump campaign, blasted out the news.

Astounding as it might be, the Democratic National Committee — on a night that was declared “historic” thanks to the nomination of a black woman for vice president (no matter how dubious she is) — was apparently unable to put up 30 separate screens of supporters elated with being part of the historic occasion.

What’s even more astounding — though it shouldn’t be at this point — is that liberals were falling all over themselves to excuse the idiocy.

One guy, when it looked like there was only one duplication, even went so far as to call the Democratic production “perfection.”

Guess what. They did that on purpose. But you can keep nitpicking. You only do that because you know you got blown out by Obama and Harris today. You have nothing better to complain about. Because it was perfection.

Well, perfection it clearly wasn’t. And there were many, many Twitter users who weren’t nearly so forgiving as the leftist vote.

This is beyond embarrassing #DemConvention

But it did make me laugh…can’t even fill a zoom screen, had to duplicate peeps? 😂🤣

Kinda says it all, when you have to use deception, doesn’t it?…..🇨🇦🇺🇸

That last one might be a little bit too harsh.

Given the oddity of the whole virtual convention setup, it’s an outside possibility that there was a technical glitch involved that somehow flooded Harris’ supporter bank with duplicate feeds.

But given the Democrats’ history of lying to the American people — this is the party of Adam Schiff, remember, and Jerry Nadler, and Nancy Pelosi, to name but a few — it’s more than possible that an organization that knows it has the slavering support of a supine mainstream media thought there would be no downside to presenting a demonstrably false image to the country on one of its most important nights of the year.

This is a candidate, also, who used her speech after being announced as former Vice President Joe Biden’s running mate to regale the country with lie after lie after lie, as National Review’s Kyle Smith pointed out last week.

Either way, it’s a rock-solid cinch that the incident won’t get anywhere near the kind of coverage in the mainstream media it would if it had been, say, Vice President Mike Pence waving like an idiot to a bank of computer-monitor clones.

As far as scandals go, “Dupli-Gate” has a nice ring to it.