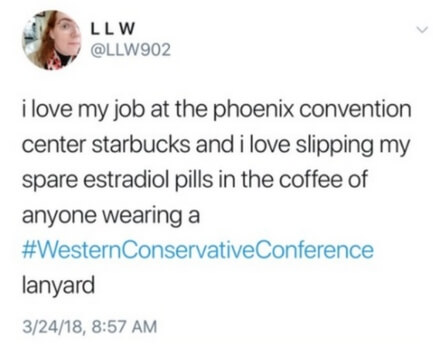 Hi @Starbucks. You have an employee who is slipping prescription drugs into customers drinks. Hope you don’t get sued…??‍♀️ https://t.co/2eKCQi1lek

Do you think he should be arrested for this?
Yes: 100% (2887 Votes)
No: 0% (11 Votes)
Lauren appeared to be unphased by the response, retweeting many of the comments that condemned his actions.
Related:
'I Don't Give a F*** If You're an Adult or Not': 9th-Grade Female Student Physically Beats Teacher