Despite the glaring lack of original programming available on television currently, given the way COVID-19 halted quite a bit of production, the NFL still suffered an embarrassing ratings blow in its “Thursday Night Football” debut.

According to Deadline, ratings for the 2020-2021 NFL season opener between the Houston Texans and reigning Super Bowl champion Kansas City Chiefs on NBC flirted with a previous nine-year-low.

Viewership for the Chiefs-Texans game finished just a hair above the nine-year-low established by the contest between the Philadelphia Eagles and Atlanta Falcons to open the 2018-2019 season.

If you include digital, viewership still dropped 11 percent.

But while last year’s season opener was a celebration of the NFL’s 100th season, this year’s opener opted to celebrate social justice.

Social justice messages were adorned in each end zone, the Texans outright refused to take the field for the national anthem, there was a ballyhooed “moment of silence” for equality and at least one player from the Chiefs knelt during the anthem.

A look at Kansas City’s end zones for Week 1 pic.twitter.com/Tn9AAu1Aui

Texans decided to NOT even take the field for the Star-Spangled Banner. Chiefs ALL stood except for DE Alex Okafor, who kneeled #NFLKickoff #HOUvsKC pic.twitter.com/xvG2aAapUp

To be fair, there’s no indication that social justice demonstrations were the sole cause of the precipitous ratings decline.

First, there’s the historic sports significance of a Thursday where, for the first time ever, the NFL had to compete for eyeballs with MLB, the NBA, the WNBA, MLS and the NHL.

Today is the first day EVER that the NFL, MLB, NBA, WNBA, MLS and NHL will all play on the same day 🤯

After the Texans scored first, the Chiefs scored 31 straight points, effectively putting the game away early in the second half. Bears-Packers from last season may not have been high-scoring given that Green Bay won 10-3, but it was still a one-score game.

Finally, neither the Chiefs nor Texans are typically considered big-time ratings draws.

Texas will always be Dallas Cowboys country and the Chiefs, despite one of the more passionate fan bases in football, don’t have the same ratings draw of a more public team like the Cowboys, Packers or New England Patriots.

Even given all that, however, it’d be downright disingenuous to suggest that the social justice demonstrations had nothing to do with the ratings dip.

At the very least, even if fans are not outright boycotting the NFL, it seems almost inarguable that there’s at least some social justice fatigue setting in among even football’s most passionate viewers.

If Goodell doesn’t recognize at least that, this could just be the beginning of a very rough season for America’s most popular sport. 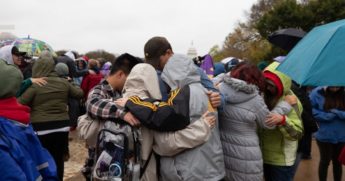