China Is Actively Trying to Acquire Your Genetic Data, US Officials Warn

“This will be a Big Day for social media and FAIRNESS,” Trump tweeted Thursday morning.

The announcement follows the social media giant’s application of an informational label to two of the president’s tweets about mail-in voting. 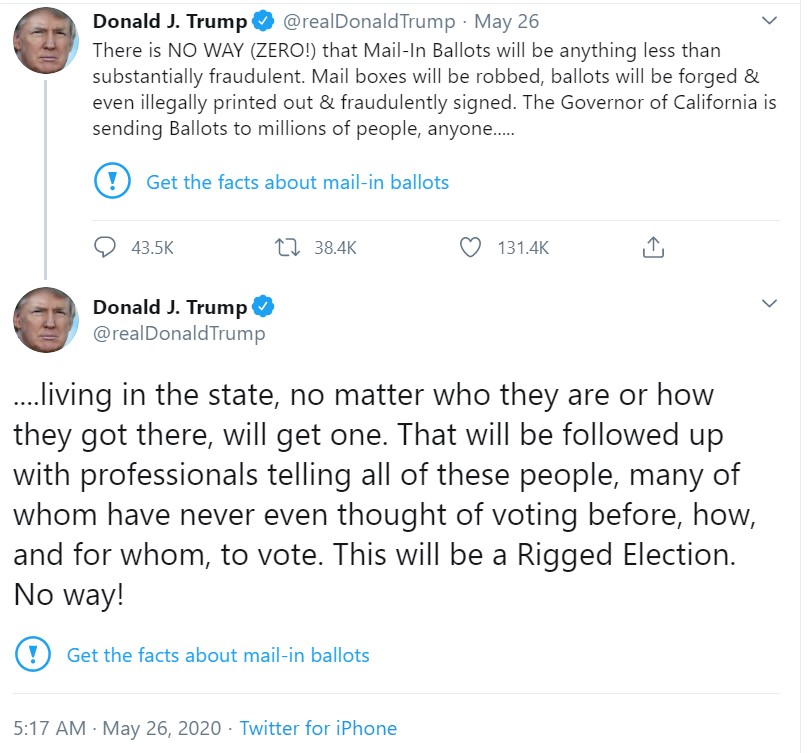 Trending:
Coroner Arrives on Scene as Police Appear to Tell Brian Laundrie's Parents They 'Might Have Found Something'

“These Tweets contain potentially misleading information about voting processes and have been labeled to provide additional context about mail-in ballots,” a Twitter spokesperson told The Hill.

Trump was quick to call out the social media giant for bias and tweeted that there will be “Big action to follow!”

Twitter has now shown that everything we have been saying about them (and their other compatriots) is correct. Big action to follow!

According to a draft of the order obtained by Bloomberg, it would ask the Federal Communications Commission to issue rules clarifying social media companies’ protections against lawsuits when they act “in good faith.”

The clarification could allow users to sue companies over the removal of social media posts and videos that are inconsistent with the terms of service or do not provide enough notice to the users prior to the removal of the posts.

“These platforms act like they are potted plants when [in reality] they are curators of user experiences, i.e. the man behind the curtain for everything we can see or hear,” an administration official told Politico.

This announcement also follows a report from The Wall Street Journal last weekend that Trump is considering creating a panel to review complaints of social media bias.

“The Administration is working to remedy this illegal situation. Stay tuned, and send names & events.”

This is the most recent call to action the president and conservatives have made against bias on social media platforms.

“We always knew that Silicon Valley would pull out all the stops to obstruct and interfere with President Trump getting his message through voters,” Brad Parscale, Trump’s 2020 campaign manager, said in a statement.

“Partnering with the biased fake news media ‘fact checkers’ is only a smoke screen Twitter is using to try to lend their obvious political tactics some false credibility. There are many reasons the Trump campaign pulled all our advertising from Twitter months ago, and their clear political bias is one of them.”

China Is Actively Trying to Acquire Your Genetic Data, US Officials Warn

While Americans at the border face a stream of illegal immigrants, Homeland Security is building a fence around Biden's summer home.
By Michael Austin  October 22, 2021

Gaetz said the Capitol Police recommended the individual who threatened him be arrested, but the Department of Justice had different ideas.
By Isa Cox  October 22, 2021

'Where's the dedicated lines of communication with local leaders regarding our southern border - something that frankly is a federal matter?'
By C. Douglas Golden  October 22, 2021

This is how it is done. Market competition and obstinacy are two keys to reversing authoritarian gains in politics and the culture.
By Kevin Catapano  October 22, 2021

Blinken was speaking about delicate democracies in South America when he made comments disparaging court interference.
By Kipp Jones  October 22, 2021

Just a few months ago, New Jersey Gov. Phil Murphy was up in the polls by 26 points. Now, his GOP opponent is within striking distance.
By C. Douglas Golden  October 22, 2021